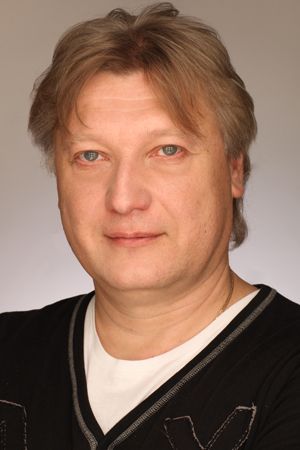 • Recipient of the medal of the order “For Services to the Fatherland”, 2nd class

Born in Leningrad.
After graduating from the Leningrad Academic Vaganova School of Dance in 1981 (class of Gennady Selyutsky) he joined the Leningrad Kirov Theatre of Opera and Ballet (renamed the Mariinsky Theatre in 1992), where he performed character dances from the classical repertoire as well as roles in productions of Raymonda (Abderakhman), La Bayadère (High Brahmin), Don Quixote (Espada), La Sylphide (Gurn), Schéhérazade (Shakhriar), The Firebird (Ivan-Tsarevich), Pétrouchka (Moor), The Fountain of Bakhchisarai (Ghirei), Romeо and Juliet (Tybalt), Shurale (Ali-Batyr), The Legend of Love (the Vizier), The Bedbug (Mayakovsky) and The Stone Flower (Severyan) among others.

He staged a production of Konstantin Sergeyev’s version of the ballet Swan Lake in Voronezh (2003), and he served as Assistant Choreographer on a production of Romeo and Juliet at the Zakaria Paliashvili State Opera and Ballet Theatre in Tbilisi (2006). Created choreography for operas May Night, The Enchanted Wanderer, Turandot and La traviata at the Mariinsky Theatre.

Since 2007 he has been a teacher and coach with the Mariinsky Ballet, working with the corps de ballet as well as with soloists on character roles. He also works as Principal Coach for many concerts held both at the Mariinsky Theatre and other venues.