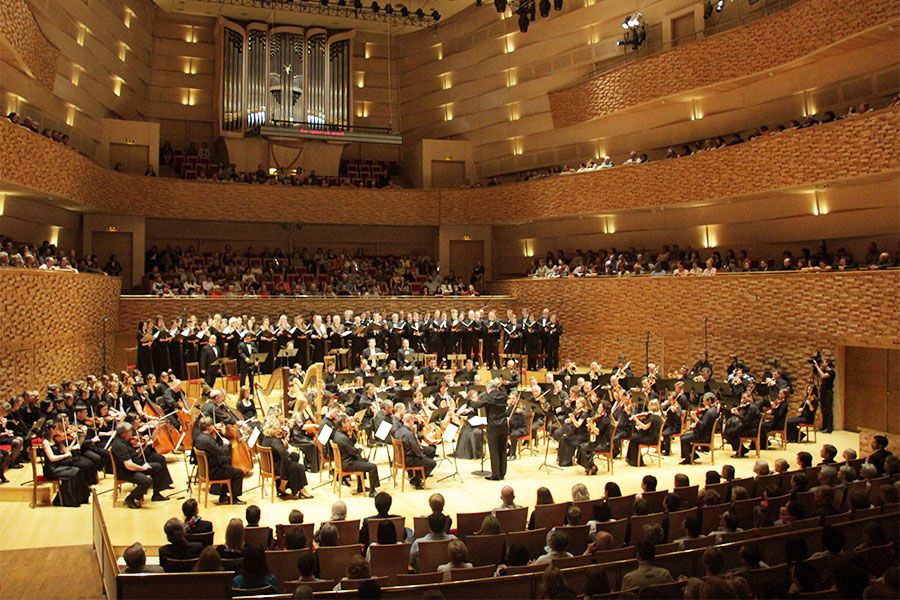 Les Troyens. Part I. The Capture of Troy (concert performance)

Part 1
The Capture of Troy
Act I
After ten years of a failed siege of the city of Troy the Greeks are abandoning their camp. The Trojans celebrate their victory on the vacated site. They see a giant wooden horse left by the Greeks, which they regard as a gift to be presented to Pallas Athene. Cassandre, daughter of King Priam of Troy, foresees the fall of Troy and the death of her beloved Chorèbe. Cassandre tries to persuade him to flee from Troy. Chorèbe, however, does not believe her predictions.
The people come together in a hymn of praise to the gods of Olympus for the salvation of Troy; Queen Hécube and Priam himself appear. Amidst the general rejoicing Hector’s widow Andromaque, together with her son Astyanax, gives vent to her implacable grief for her warrior husband. Énée rushes in and relates that the priest Laocoön, who called on the Trojans to burn the wooden horse, has been swallowed up by sea-serpents. This is seen as the wrath of the goddess Athena, enraged at the priest’s blasphemy. Then Priam, ignoring Cassandre’s protests, orders the horse be brought into Troy. The Trojans triumphantly carry the statue towards the city. In despair, Cassandre observes the procession.

Act II
The ghost of the murdered Hector appears to the sleeping Énée. He has foreseen the destruction of Troy, and orders Énée to flee the city and travel to Italy where he is to establish a new Troy – Rome. Meanwhile, the Greeks invade the city. The Trojans are prepared to die, but will never surrender to the enemy. Énée and a group of warriors, seizing the treasures of King Priam, flee from blazing Troy. Cassandre prophesies that Énée will become the founder of a new city. Knowing that Chorèbe is dead, Cassandre cries out “Italy! Italy!” and curses her own self in order to escape Greek enslavement. The other women follow her example.


Running time 1 hour 25 minutes
The concert has no interval