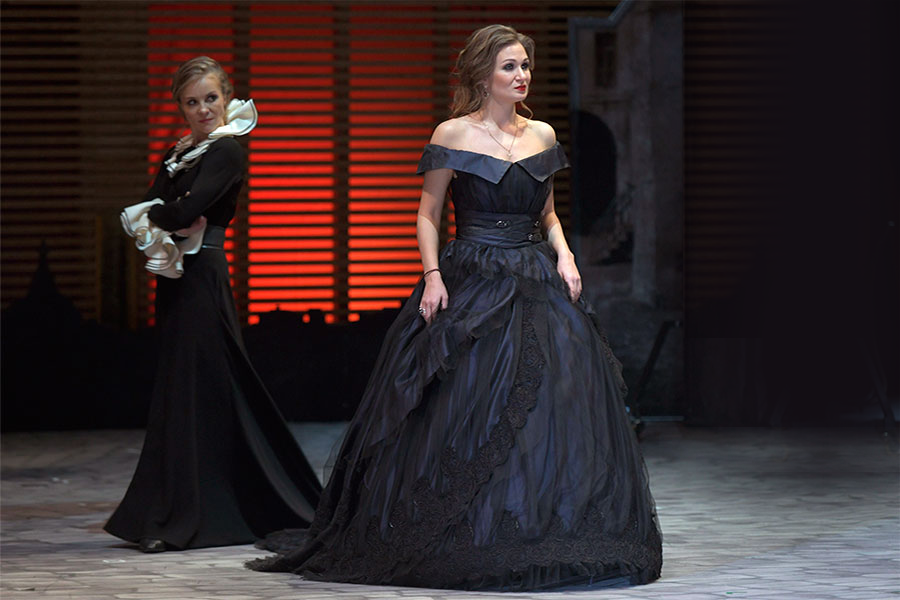 Act I
Scene 1. The Meeting on the Train
Prince Lev Nikolaevich Myshkin is returning to St Petersburg following lengthy medical treatment in Switzerland. In his compartment he meets Parfyon Rogozhin and Lebedev. Rogozhin has just received an inheritance of two million roubles from his father who recently died. Not long before that, Parfyon had been forced to flee from his furious parent: he had spent ten thousand on a gift for Nastasia Filippovna whom he met and instantly fell in love with. And now he is in a hurry to see her again.
At this time, Nastasia Filippovna anxiously awaits the evening in her room – today is her name day and she has to announce whether she will marry Ganya Ivolgin. Afanasy Totsky, whose mistress she used to be, strongly supports this marriage. Being in St. Petersburg, Nastasya Philippovna compromises him, preventing him from getting married. So her marriage would set him free.. Ganya Ivolgin begs her to say if she is prepared to marry him. But she will give her response later when the guests arrive. She gives Ganya her portrait.

Scene 2. At the Epanchins’
In his study, General Epanchin and Afanasy Ivanovich Totsky are discussing the fate of Nastasia Filippovna, Totsky’s kept woman. They are resolved to have her married off to Gavril Ivolgin, for his marriage to the “fallen” woman, Ganya will be generously rewarded – Totsky will advance her a large sum of money. If it happens, he will be able to marry Aglaya, Yepanchin’s daughter
Prince Myshkin has arrived to meet his only relatives in St Petersburg, the Epanchin family. The general is little pleased with his visitor who has no plans for the future or means to live. Ganya enters;he shows them a portrait of Nastasia Filippovna which she gave to him. The prince is amazed:“A beautiful and mysterious face, and her destiny is an unusual one.”
General Epanchin leaves his visitor with his wife and daughters Aglaya, Alexandra and Adelaida. They are enchanted with Myshkin’s stories about life in Switzerland. The prince read human faces; he describes the character of each of the Yepanchins, but when it comes to Aglaya, he is silent for a while before saying: “You have a rare beauty ... Almost like Nastasya Philippovna”.
Ganya asks the prince to give Aglaya a letter in which he confirms that at one word from her he will break off the engagement. Instead of a response the girl asks the prince to write a phrase in her album – “I don’t stoop to trading” and returns his note. Ganya is furious. Meanwhile Rogozhin borrows a hundred thousand roubles to buy Nastasya Philippovna. Accompanied by a crowd of usurers, he goes to Ganya

Scene 3. At the Ivolgins’
The Ivolgins gather in the drawing room. Varya, Ganya’s sister, is horrified – he plans to marry a dissolute woman whom he, moreover, does not love. Nastasia Filippovna herself appears. Her meeting with the prince, whom she initially thought to be a servant, amazes her. A drunken crowd comes in, led by Rogozhin – he tries to outbid Ganya and then Nastasia Filippovna in order to prevent the marriage. The deal is broken off amid a scene of scandal – Ganya attempts to hit Varya who is incensed at all that has happened but the prince stops him.

Scene 4. Day of the Angel
General Epanchin, Lebedev, Totsky and Ganya are visiting Nastasia Filippovna. Unexpectedly for all present, the prince appears. The name-day girl asks him whether she should marry Ivolgin – and he says no. “That’s how it should be,” she concludes. It is clear to her that Ganya was led only by self-interest. Rogozhin enters; he has brought the hundred thousand he had promised. The prince proposes that Nastasia Filippovna marry him, stating that her life is not over, that she is guilty of nothing and that, quite the reverse, she is a victim. She is prepared to break up with her past and ‘set Totsky free for nothing’. It turns out that the prince has inherited a great fortune. Nastasya Philippovna feels happy about the prince’s proposal: she believes that he is the only one to understand her nature. But she cannot agree to the marriage – it seems to her that any such union will destroy the prince. She takes the money from Rogozhin, throws it into the fire and orders Ganya to take it out. He faints.Rogozhin and Nastasia Filippovna depart.

Act II
Scene 5. At Rogozhin’s
Six months later. The prince had an affair with Nastasya Philippovna and then broke up with her. Now she lives with Rogozhin.
The prince has come to Rogozhin. Parfyon is convinced that Nastasia Filippovna, who lives with him, is in love with the prince alone. Myshkin convinces him that he is not a rival – he is driven only by pity. The prince and Rogozhin fraternise. In the gateway the prince falls senseless.

Scene 6. The Faithful Knight
In Lebedev’s country house, the prince recovers from his seizure.The Epanchins arrive to visit him. Aglaya sings a ballad about “The Poor Knight”, but the proposal that she might marry Prince Myshkin drives her furious. The prince is forced to explain that he had no intention to ask for Aglaya’s hand.Mrs Epachkin laments – how hard it is to be the mother of grown-up daughters!

Scene 7. Two Meetings
Aglaya has appointed a meeting with the prince in the park. She wants to elope from home and begs his assistance. Yet the notion that the prince has lived with Nastasia Filippovna perturbs her – and now this unknown woman is writing her letters, persuading her to marry the prince. In disarray, Aglaya flees. Nastasia Filippovna appears. All is decided – she will marry Rogozhin and only wishes to know if prince Myshkin is happy.

Scene 8. Lebedev’s Confession
The Epachins are in disarray: they have received news that the prince is Aglaya’s fiancé. At their request to provide a definite answer if he has asked her hand the prince confirms all. Lebedev informs the prince that Aglaya is meeting Nastasia Filippovna. “Evil rules the world. And gold as well,” he confirms in response to the prince’s past musings. The prince and Aglaya go to Nastasya Philippovna. Aglaya wants to take her rival down a peg.

Scene 9. The Rivals
The prince and Aglaya are with Nastasia Filippovna. Being determined to protect the prince from Nastasya Philippovna, Aglaya asks her to stop writing letters and trying to interfere in their lives. ‘You’re a coward! You’re jealous! You’re afraid of me!’ Nastasya Philippovna replies. Now the prince has to make a choice – and the prince, unable to overcome his suffering, remains with Nastasia Filippovna. But their marriage never truly took place: the bride flees from the ceremony to Rogozhin.

Scene 10. Reconciliation
Nastasia Filippovna is dead, Rogozhin has killed her. The prince who has come to see him learns of the murder.

It’s not so long ago that the music by Mieczysław Weinberg (1919–1996) first appeared on theatres’ repertoire. The first concert performance of The Passenger, his first opera (1968), whose protagonists are a former concentration camp prisoner and her female guard, took place in 2006 in Stanislavsky and Nemirovich-Danchenko Moscow Music Theatre. A festival dedicated to the 90th anniversary of the composer was held in England in 2009, featuring his instrumental pieces, the one-act opera Lady Magnesia and the Requiem. One year later Teodor Currentzis conducted the first performance of The Passenger at Bregenz Festival. After that, several opera theatres showed interest in Weinberg scores, especially The Passenger, The Portrait and The Idiot. Music by this "previously unknown Soviet composer" was a real revelation for Europe, while the author was soon announced to be the third greatest composer after Shostakovich and Prokofiev.
A younger contemporary of Shostakovich and an older contemporary of Schnittke, Mieczysław Weinberg was born in Warsaw. In 1939 he managed to escape and get to the Soviet Union while his entire family perished in the ghetto. The composer’s life changed greatly after meeting Shostakovich who became his friend, promoted his works and pleaded for his release when Weinberg was arrested in connection with "the Doctors' plot" in 1953. Weinberg always considered himself to be a disciple of Shostakovich, although formally he never took a single lesson from him, nor imitated his style despite the obviously strong influence of his senior colleague. While authoring more than 20 symphonies and 7 operas, he was better known to the general public for his numerous works in films and animation, including soundtracks for the famous film The Cranes Are Flying and for Winnie the Pooh cartoon series. The composer died in 1996, gaining no world fame and convinced that his music that was hardly ever performed in his lifetime, would be totally forgotten after his death.
The Idiot (1986) is the last opera by Weinberg. Four parts of the novel by Dostoevsky were transformed into four hours of music with intense symphonic development, catchy melodies and leitmotif-based structure. The story line of the opera reflects almost every twist and turn of the novel, but Prince Myshkin's disease is left in the past (the scenes showing his paroxysms, as well as the final, were not included in the libretto). Since the protagonist is preaching the composer’s own ideals, the monologues of Prince Myshkin are the only fragments of Alexander Medvedev’s libretto, that are not based on the original Dostoevsky’s text.