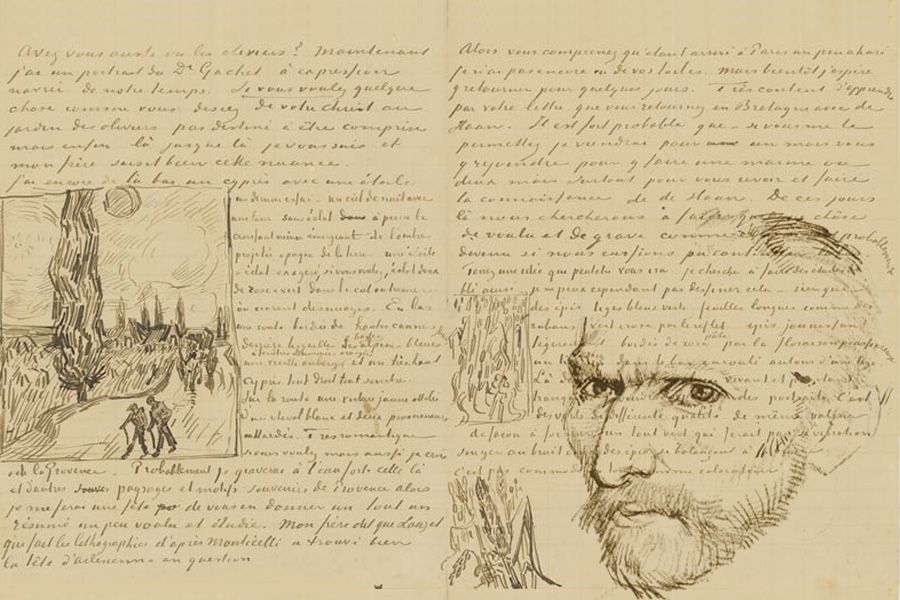 Composer Grigory Frid (1915–2012) wrote just two operas, both times using documental texts and involving a single vocal role. The titles speak for themselves – The Diary of Anne Frank (1969) and Letters of Van Gogh (1975). For the composer, turning to the letters of the post-impressionist artist had a special, almost ritualistic quality: Frid was a professional painter who produced some forty canvases, while late in life he launched his career as a writer. "Here I didn't even think the music to be most important, but rather the fact that in the libretto I succeeded in retaining the original text. Probably my love of documents played a role here," the author admitted. The composer compiled the libretto, comprising twenty episodes, from seven hundred letters with jeweller-like skill.
Originally, the opera was written for lyric baritone, clarinet, piano, string quartet and two groups of percussion instruments. As a prologue and epilogue there is a melody rising upwards through four octaves – unstable and given in restrained movement. It is reminiscent of a cradle song, but the dream it conveys is disturbed. More precisely, Letters of Van Gogh - gloomy in terms of colour - is music of sleeplessness, and the cradle song, as in Stravinsky's Le Baiser de la fée, resounds in a Land beyond time and space. The musical time and setting of the opera are unclear and stationary. It is difficult to say whether the artist is addressing the letters to his brother Theo – or to God Himself, whether he is singing about something that has just happened – or whether the circumstances of time and places that he mentions (Antwerp, Arles, Dr Rey's asylum and the Monastery of St Paul) are no longer significant and serve merely as a frame for deep philosophical generalisations.
Letters of Van Gogh is structured on the simultaneous action of movement –inflexibility, calm–alarm, harshness–lyricism. The inner tension lasts the entire seventy-five minutes: even when the relates that he is very well the accompaniment casts doubt over his words. The fabric of many of the numbers is sewn using bleakly mocking ostinati, and in these we hear the nature of Shostakovich's scherzos (The Potato Eaters, Arles and The Man with the Cut-off Ear). At the other end of the scale there are concentrated instrumental interludes, anxious night-time lyricism with the pealing of fairy-tale bells and the slow onward march of time (In the Atelier and Mournful Music). The clocks of Letters of Van Gogh count out not the time of life but cosmic time.
In an opera about a madman who cuts off his own ear (as Van Gogh is most frequently depicted), one should not expect explosions of madness or the burning of an open flame. The character's mental storms are restrained, and the vocal role was mostly written in a softer cantilena manner. Only occasionally in the accompaniment do harsh and avant-garde-like broken accords break through, while the voice undertakes fantastically high leaps. The protracted confessional monologue, devoid of vivid theatrical effects, requires incredible self-discipline from the singer and from the audience. Possibly this is why Letters of Van Gogh is approached by few singers. The first to do so was Sergei Yakovenko – his performance was recorded by Melodiya in 1986 (conducted by Mark Ermler). Six years later the opera was mounted by Novosibirsk Television with a series of cuts (with soloist Vladimir Urbanovich; available on the internet). In 2009 at St Petersburg's Hermitage Theatre a stage version was presented by designer Alexander Malyshev, baritone Pavel Napalkov, the eNsemble PRO ARTE and conductor Alexis Soriano who had found the opera's score in his native Madrid and wished to perform it in Russia – which came as a tremendous surprise indeed to the ninety-four-year-old composer, who considered Letters of Van Gogh to be no longer of interest to anyone.
Bogdan Korolyok