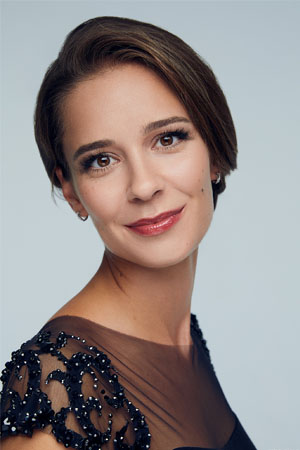 Elena Fedorenko was born in Veliky Novgorod. In 2012, she graduated from the St Petersburg State Rimsky-Korsakov Conservatoire.

Since 2013 Fedorenko has been Concert Mistress of the Mariinsky Academy of Young Opera Singers.

As a pianist and accompanist, Elena regularly appears at the theatre’s chamber venues in vocal concerts, as well as in productions for general audiences. She prepared premiere of mono-operas Letter from an Unknown Woman by Antonio Spadavecchia, Van Gogh's Letters by Grigory Frid, music tales Adalmina’s Pearl by Hrayr Khanedanyan, Wash’em Clean by Yuri Levitin, The Wooden House by Leonid Klinichev, and The Little Sweep by Benjamin Britten. She also performs in operas The Christmas Tree by Vladimir Rebikov, White Nights by Yuri Butsko, Scenes from the Life of Nikolenka Irtenev by Sergei Banevich, The Little Prince by Leonid Klinichev, and The Boy Giant by Tikhon Khrennikov.

She has appeared in concerts in Italy, the United Kingdom, France, and Finland.