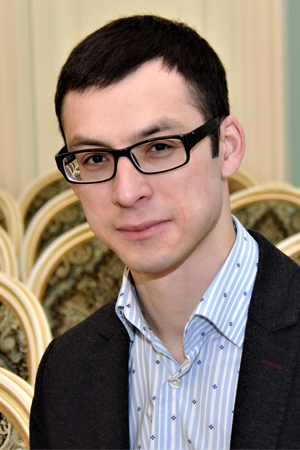 Alexei Smirnov graduated with distinction from the Gnessin School of Music and GITIS (workshop of Alexander Titel and Igor Yasulovich). Trained at Russia's Bolshoi Theatre on Robert Carson's production of Rigoletto (2014). Participated in the laboratory Visual Theatre (curated by Dina Goder) as part of an educational programme of the Golden Mask festival in 2016. Assistant Stage Director for the Moscow Stanislavsky and Nemirovich-Danchenko Musical Theatre's productions of Die Zauberflöte, Il matrimonio segreto, Khovanshchina and Beyond the Shadows.

Together with the New Music Studio ensemble he works in experimental musical theatre genres. Has staged the travelogue-production Pictures at an Exhibition at the Udarnik cinema and the instrumental theatre productions The State of Things and Little Red Riding Hood at the Meyerhold Centre.

In 2016 he was the winner of the competition of young directors at the Mariinsky Theatre, and in 2017 he was a prize-winner at the International Competition of Opera Directors NANO-OPERA (3rd prize).

At the Mariinsky Theatre he has staged the mono-opera Van Gogh's Letters by Grigory Frid.
Information valid for January 2018