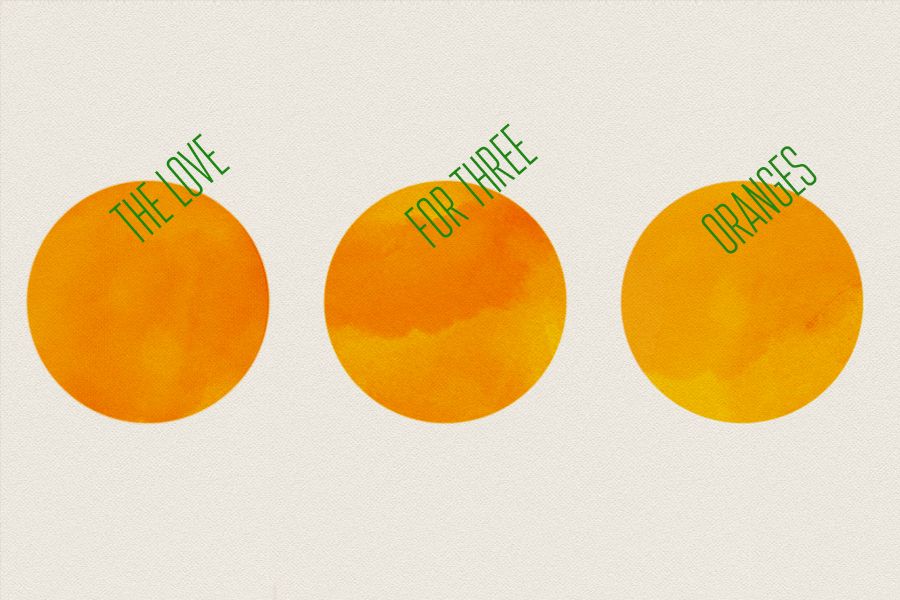 The Love for Three Oranges

Synopsis Tragedians, Comedians, Lyric Poets and Empty-Heads are arguing over what performance they wish to see today. Some insist on a tragedy, others want a comedy. The Ridiculous People appear. They call for the audience to be silent and they begin their narrative. The King of Clubs is in despair. His son the Crown Prince is dying of hypochondria.

The doctors declare the case hopeless, but the King recalls the miraculous power of laughter. Pantaloon, the King’s confidant, calls Truffaldino for help, and the King orders him to organise entertainments for the court. The fate of the Prince and the ambitious Prime Minister Leandro is being played out in a game of cards. The Wizard Celio, who is trying to restore peace and harmony to the world, is playing against Fata Morgana, a ruthless and jealous witch who seeks the Prince’s death and who is protecting Leandro and the King’s scheming niece Clarissa. Clarissa dreams of ascending the throne and marrying Leandro. But to do this she must first take care of the Prince, and Clarissa presents Leandro with an ultimatum: “Give the Prince either opium or a bullet”.
The slave Smeraldina overhears and tells Clarissa and Leandro that Fata Morgana is on their side. With immense effort Truffaldino makes the Prince get out of his cosy bed and come to the festivities organised specially for him.

The Prince falls asleep and Truffaldino decides to quench his thirst with orange juice. Instead of juice, the orange reveals a Princess who begs for water. In despair and wishing to save her, Truffaldino peels the second orange. But it contains a second Princess who also wants water. Both Princesses die before the distraught Truffaldino. Driven mad by his helplessness, Truffaldino has but one option: to run away.
The Prince awakes. He cannot wait to see what is hidden inside the last orange. Yet another Princess appears. She declares her love for the Prince and says that she awaits salvation. Like the other Princesses, Ninetta begs for water.

The Ridiculous People come to help: with them they bring a pail of water. Ninetta is saved. The Prince heads for the palace to inform the King of his impending marriage. Meanwhile Smeraldina, using a magic pin given by Fata Morgana, turns the Princess into a rat and takes Ninetta’s place. The Wizard Celio and Fata Morgana are in a heated quarrel about the fate of our heroes. Once again the Ridiculous People come to the rescue. They succeed in disposing of the witch. Now the Wizard Celio can rescue the bride and groom. In the throne room of the royal palace all is ready for the Prince’s wedding. Suddenly the courtiers notice a huge rat. Celio removes the curse and the rat turns back into Princess Ninetta. Clarissa, Leandro and Smeraldina’s treachery is exposed.
The King orders the execution of the conspirators. They attempt to flee and are aided by Fata Morgana, who has taken refuge in the netherworld. The King and the courtiers honour the delighted Prince and Princess as newlyweds.

Running time: 2 hours 10 minutes
The performance has one intermval