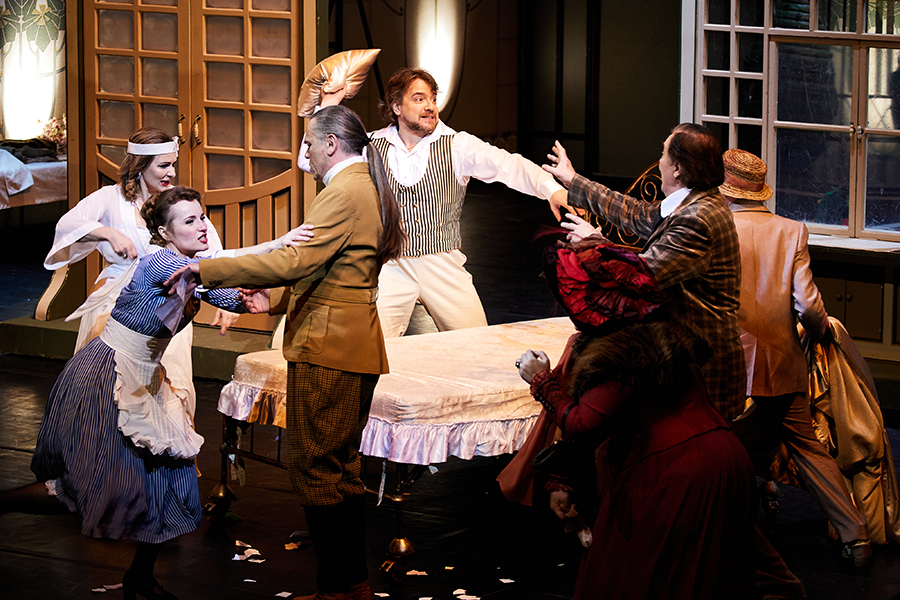 Music by Wolfgang Amadeus Mozart
Libretto by Lorenzo da Ponte, after the comedy by Beaumarchais
Translated by Pyotr Tchaikovsky

Act I
Merry wedding preparations are underway at the home of Count Almaviva. Count Almaviva’s valet is marrying Susanna, the Countess’ maidservant. The impending festivities bring the Count no joy whatsoever: he has taken a fancy to the bride-to-be himself and is looking for some reason to prevent the marriage. Susanna anxiously tells her future husband of the Count’s amorous intentions. Figaro is ready to employ all his cunning and inventiveness to ruin his master’s machinations. The convivial Figaro, however, has many enemies. To this day, old Bartolo has been unable to forget his former barber’s cunning, aiding the Count to marry his ward Rosina. The ageing housekeeper Marcellina dreams of marrying Figaro herself. Both Bartolo and she hope that the Count, frustrated by Susanna’s uncompromising nature, will help them. Marcellina greets Susanna with ceremonious curtsies and spiteful compliments. Susanna merrily and wittily laughs at the shrewish old woman. Cherubino appears. The young page is in love with every woman in the castle. He idolises the Countess, but is not averse to making advances to Susanna to whom he has come to share his woes – the Count found him with Barbarina, the gardener’s daughter, and has driven him from the castle.
The Count arrives unexpectedly, forcing Cherubino to hide.
The Count again begs Susanna to accept his overtures, but the amorous grandee’s declarations are interrupted by a knock at the door – it is the scheming Basilio. The Count’s jealousy has been roused by the old gossip’s hints at Cherubino’s love for the Countess. Enraged, he tells Susanna and Bartolo of the page’s tricks and then suddenly spots Cherubino in his hiding place. The Count’s fury knows no bounds. Cherubino is immediately ordered to enlist in the army. Figaro consoles him.

Act II
The Countess is distressed at her husband’s indifference. Susanna’s tale of his infidelity wounds her to the quick. Sincerely empathetic towards her maidservant and her groom, the Countess eagerly adopts Figaro’s plan to call the Count into the garden at night and send Cherubino in a woman’s dress to meet him instead of Susanna. Susanna immediately begins to disguise the page. The Count’s sudden appearance throws all into confusion. They hide Cherubino in the room next door.
Surprised at his wife’s confusion, the Count demands she unlock the door. The Countess adamantly refuses, saying that only Susanna is there. The Count’s jealous suspicions become stronger. Resolving to break down the door, the Count departs with his wife to fetch some tools. The quick-witted Susanna helps Cherubino out of his hiding place – but where should he run? All the doors are locked. In panic, the poor page has to jump out of the window.
Returning, the Count finds Susanna behind the locked door, laughing at his suspicions. He is forced to as k forgiveness from his wife. Figaro runs in and announces that the guests have already arrived. The Count, however, delays the start of the festivities – he will wait for Marcellina to arrive. The housekeeper appears, demanding that Figaro either repay her an old debt or marry her. Figaro and Susanna’s wedding is postponed.

Act III
The court has decided in favour of Marcellina. The Count is victorious, though his triumph is short-lived. It suddenly transpires that Figaro is Marcellina and Bartolo’s own son, kidnapped by bandits as  a child. Figaro’s deeply affected parents resolve to marry. Now two weddings are to be celebrated.

Act IV
The Countess and Susanna cannot drop the idea of teaching the Count a lesson. The Countess decides to wear her maidservant’s dress herself and go to the midnight rendezvous. Under her dictation, Susanna writes a note appointing a meeting with the Count in the garden. Barbarina is to pass the message during the festivities. Figaro laughs at his master but, learning from the unaffected Barbarina that the note was written by Susanna, he begins to suspect his wife of adultery. In the darkness of the garden at midnight, he recognises the disguised Susanna, but makes as  if he knows her to be the Countess. The Count does not recognise his wife dressed as  the maidservant and draws her into the gazebo. Seeing Figaro declaring love to the false Countess, he raises a scandal and calls on witnesses so he can publicly accuse his wife of infidelity. He refuses all prayers for forgiveness. But here the real Countess appears and removes her mask. The Count is in disgrace and begs his wife’s forgiveness.

The irrepressible and omnipresent Figaro first appeared before the public in plays by de Beaumarchais, moreover producing something of a scandal: the concept of the injustice of class barriers and the fact that, in the words of Karamzin, “peasant women, too, are capable of loving” would have seemed to be radical free-thinking in the eyes of someone living in the 18th century. Lorenzo Da Ponte transformed the caustic French comedy into an Italian opera buffa libretto, while the thirty-year-old Mozart composed the timeless music that is today performed at opera houses throughout the world.

Le nozze di Figaro is a comic opera, a merry festive performance with people swapping clothes and confusion bordering on chaos; there are times when only the desire not to miss a single note of Mozart's music prevents the audience from erupting into explosive laughter. The composer's genius, however, affords the madness unfolding in this castle in Seville a secret depth. In the first scene, Figaro uses a ruler to measure the dimensions of the room; everything that the audience will subsequently see is given a totally different and unseen scale by Mozart. It is by this scale that the lofty and the low are measured, and the gradations on this scale are subtle and contradictory. The results are ambiguous: if we set this “ruler” against a hierarchical social staircase then the Count is at the very top and Figaro is at the bottom, whereas if we attempt to measure the spiritual qualities of the characters then this is all reversed. Thus the question of honesty and honour is asked: one is ready to kill to defend his honour, though is himself dishonourable, and the other piles up deceit upon deceit and yet retains his honour. Regardless of its affinity with the masks of commedia dell'arte, the characters in Le nozze di Figaro are real, living people, and their “indicators” on the scale of loftiness and lowliness, of nobility and plebeianism, may change fundamentally, so even the most envious schemer can be transformed into a caring mother, and a dissolute lady-killer may become a loving husband. It is Mozart's music that renders the protagonists alive, real and feeling people.

At the Mariinsky Theatre, two stage versions of Le nozze di Figaro are performed. Alexander Petrov's production has been staged at the Concert Hall since 2009. The opera's plot has been moved to the start of the 20th century, the age of art nouveau. Closer to us in chronological terms, the action thus takes on new semantic nuances. When the blundering young lad Cherubino receives a gas-mask together with his military call-up, this appears to be not merely amusing, but frightening as well, and when the menacing and jealous Almaviva drags a wooden dog on wheels behind him we ask ourselves the not unreasonable question – who in fact is the capricious child in this castle? The manners of the classes vary little between each other, the class world is gradually disappearing into the past, though the stratification of society into people who are “special” and those who are “simple”, into people with privileges and those who are the “have-nots”, will remain as it has always been – just like humanity's desire to love, to be loved and to fight for our happiness.

The circular space of the Concert Hall poses specific tasks for production teams. In Le nozze di Figaro these tasks have been resolved with refined wit: the audience seems to be looking at a three-dimensional model of a house, observing it from different angles. The opera is performed in Russian, making it more accessible and even more engaging. Khristina Batyushina

Running time 3 hours 15 minutes
The performance has one interval