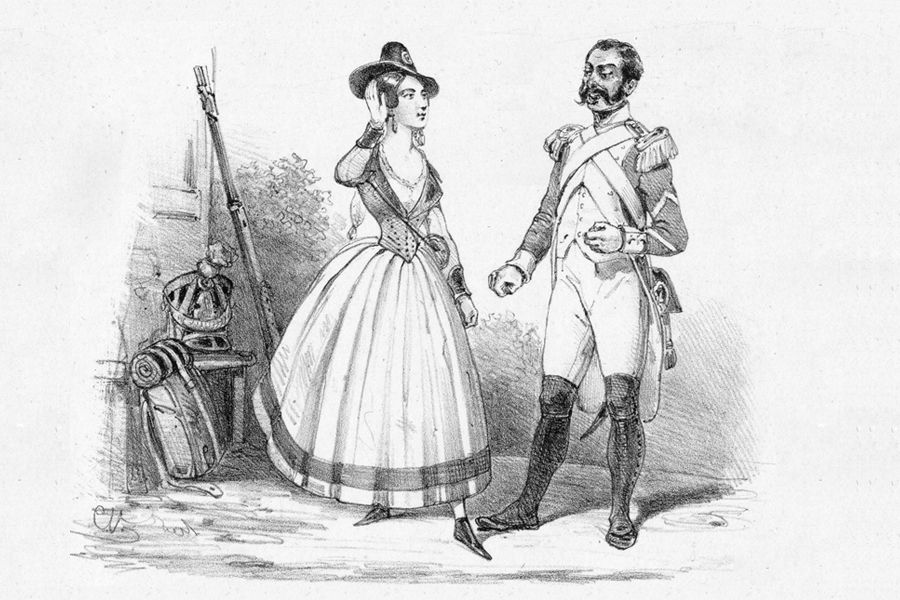 opera by Gaetano Donizetti
The performance will have synchronised Russian supertitles

The action takes place in the Tyrol in 1805.
Act I
Returning to her castle, the Marquise of Birkenfeld and her steward Hortensius are forced to seek refuge in a small Tyrolean village due to the advance of Napoleonic troops. Very close by, volleys of gunfire can be heard and the women are praying to the Madonna for protection as the battle unfolds. Hortensius tries to keep his mistress calm. The words of the prayer, taken up by all the residents, become a courageous hymn.
The peasants bring news: the French have left the mountains and the danger has passed.
In gallant couplets the Marquise laments the unpleasantness that war brings. Sharp rebukes about the French can be heard; for her, they are just a gang of bandits. Hearing that the enemy is now remote, the Tyroleans, and with them the Marquise, rejoice in the anticipation of peace. Suddenly French grenadiers appear, headed by Sergeant Sulpice.
With them is Marie, a vivandière and the pride of the 21st regiment. Twenty years ago she had been found by soldiers on the battlefield and they raised her within the family of the regiment. The mischievous girl loves nothing more than the pounding of the drum and cannot imagine life without being on a campaign.
The soldiers take a captured spy to be executed. Marie recognises him to be the man who saved her from falling into an abyss in the mountains. Tonio, a young Tyrolean who is in love with Marie, it seems has appeared here in order to see her. Marie convinces her “fathers” to spare his life. The truce is secured with full glasses and toasts raised to France. Marie sings couplets in praise of the regiment’s victories. The signal to assemble is given and the soldiers depart. Tonio deliberately remains in order to speak with Marie. On learning that she has made a promise to marry only a soldier from her own regiment, Tonio resolves to join the grenadiers.
The Marquise makes so bold as to ask Sulpice for an escort and unexpectedly discovers that Marie is the daughter of Captain Robert who was, the Marquise relates, once married to her late sister.
The grenadiers raise the battle cry on the drums, inspiring them to great victories.
Tonio delightedly addresses the soldiers of the regiment: now he too will march under their banners and thus may count on the favour of the “fathers”. On receiving permission to marry, he is in seventh heaven from happiness. But suddenly Sulpice announces that his bride must leave the regiment. Marie bids farewell to her beloved with a sad romance. But the Marquise is indifferent to Tonio’s anguish and the soldiers’ indignation – she leads her niece away.

Act II
At Birkenfeld Castle one year later. The Marquise hopes to transform the former vivandière into a well brought-up young lady who can make a good match in marriage – the son of the Duchess of Krakenthorp. She asks Sulpice, who now serves as a butler in the castle, to influence the obstinate girl. The Marquise helps her niece learn a sentimental waltz, but with Sulpice’s approval the latter quickly switches to her favourite military song (Rataplan).
Left alone, Marie considers her bitter fate; in acquiring a home and a name she must forget her friends and her beloved. Suddenly sounds of a military march can be heard from the road. It is the grenadiers’ regiment approaching the castle. Among the army comrades is Lieutenant Tonio who has been made an officer for his bravery. The friends are delighted at their joyful reunion. Marie and Tonio persuade Sulpice to put in a word for their marriage. Tonio asks for Marie’s hand, but the Marquise does not wish to hear a word about such a union. Left alone with Sulpice, the Marquise admits to him that Marie is not in fact her niece – she is her own daughter!
The Duchess of Krakenthorp and her entourage arrive at the castle, ready to sign the marriage contract. On discovering the truth, Marie runs to her mother – she is prepared to submit to her will. Tonio and the soldiers burst in. He shocks the aristocrats with the story of the Marquise’s daughter’s past as a vivandière. Affronted, the aristocrats leave the castle and the Marquise can do nothing but grant the lovers her blessing. Praising France, all celebrate the return of the regiment’s daughter.