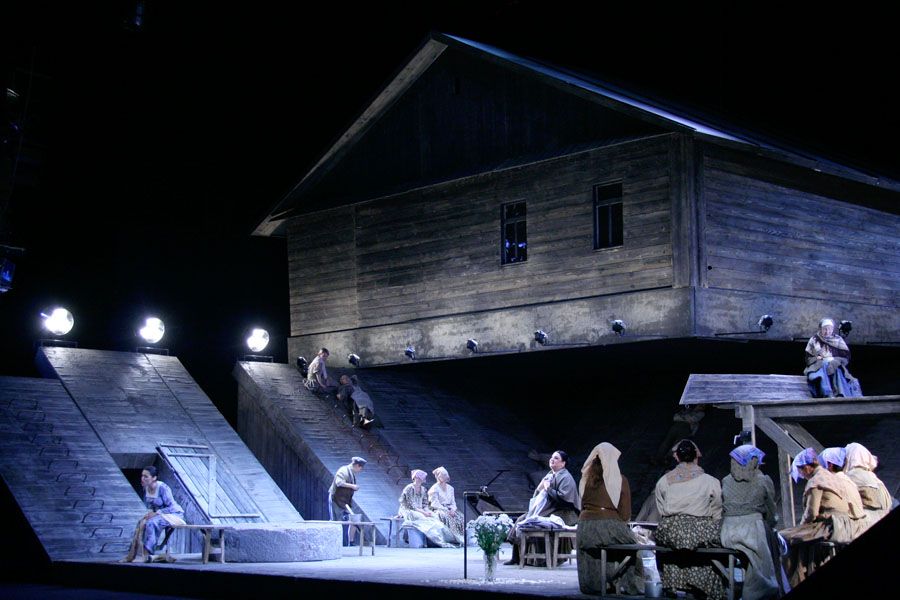 Act I
At a mill. Jenůfa, the stepdaughter of the churchwarden, awaits her beloved Števa. The girl prays to God for the lad not to be conscripted: they are expecting a child. They must marry as soon as possible so that no-one guesses at the truth.
Under the command of the drunken Števa, the village boys return from the city. Števa has been released from military service and he, bawling drunken songs, provokes those around him. Incensed at his behaviour, the churchwarden decides to delay her stepdaughter's marriage by a year. It will take place only on the condition that the groom abandons his debauched ways. Jenůfa despairs. Števa, chuckling condescendingly, promises to love only his girl "with cheeks as rosy as an apple". Old Buryjovka, Števa's grandmother, calls her grandson home.
Števa's half-brother Laca has long been in love with Jenůfa, and tries to convince the girl that her darling is not worthy of her. But she merely teases her luckless suitor... In an explosion of jealousy, Laca slashes her cheek with a knife and flees, horrified at what he has done.

Act II
The churchwarden's hut. Half a year later. One week earlier, Jenůfa gave birth to a son. So that no-one in the village discovers what has happened, the girl has been kept in confinement for a long time.
Jenůfa's stepmother gives her a sleeping draught. With a note, she has invited Števa to visit and, while her stepdaughter sleeps, wants to speak with him and convince him to marry. But Števa has grown cold towards his former lover, and has moreover now promised to become engaged to Karolka, the daughter of the village mayor. Without even looking at his son, he leaves.
Laca appears. He asks the churchwarden for her stepdaughter's hand in marriage. Fearing that the existence of the child may make Laca change his mind, the deaconess resolves to commit a dreadful sin – to drown the child. Waking up, Jenůfa discovers that the little Števuška has died while she was ill. In despair, the girl agrees to become the wife of the faithful Laca.

Act III
Two months later. The final preparations for the wedding are underway in the hut. The girls who have gathered sing a merry song. Only the mistress of the house, tormented by her conscience calling out to her, feels out of place. Unexpectedly a scream comes from the street: a dead child has been found under the melting ice of the mill-pond. Seeing the child's nappies, Jenůfa understands that it is her son. The incensed peasants wish to stone this wicked mother. Unable to conceal the truth any longer, the churchwarden admits to her crime. She is arrested. The young Karolka, on learning that the child's father is Števa, abandons her groom forever. The guests depart. Only Laca remains with Jenůfa – to the end of his days he will be faithful to his beloved.