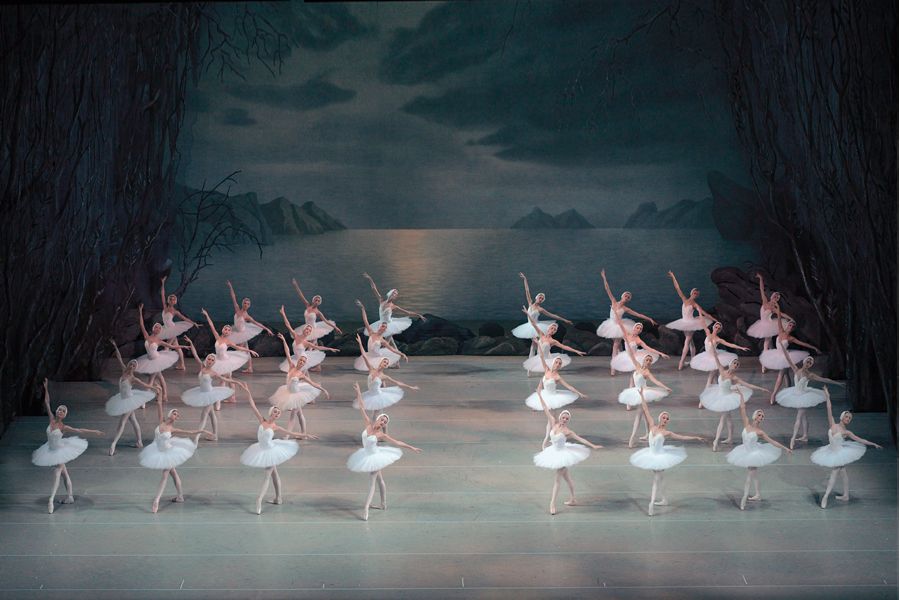 Lighting Adaptation for the Mariinsky II by Andrei Ponizovsky

Act I
Scene 1: The Park of a Castle
Prince Siegfried and his friends are celebrating his coming of age at a private party. The guests drink to his health and the jester entertains them with his antics. The Prince is warned that his mother, the Princess Regent, is approaching.
She is displeased with her son’s behaviour and she presents him with a crossbow. After the Princess has gone, the partying begins anew.
Twilight falls. The guests depart and the Prince is left alone in the park. High above, Siegfried catches sight of a flock of white swans and the vision stirs the hunter’s urge in him.
Seizing his bow, the Prince makes his way off into the heart of the forest.
Scene 2: A Lake in the Forest in the Middle of the Night
White swans are swimming near the shore; they are beautiful young maidens who have been transformed by the evil magician von Rothbart. Only at night can they assume human form and the only power on earth which can break this evil spell is devoted love.
Siegfried appears. He sees one of the white birds come to shore and draws his bow to shoot it. The bird suddenly turns into a beautiful woman – it is Odette, Queen of the swan-maidens. Odette’s beauty enthrals the Prince and he tries to capture her. She, however, is afraid of the evil magician and, as she avoids Siegfried, she disappears in the midst of the swan-maidens. Siegfried runs after Odette and vows eternal love and fidelity to her.
Odette’s heart responds in the same way to Siegfried’s passionate love.
Dawn breaks. Odette bids Siegfried a tender farewell and the white swans glide slowly away across the lake.

Act II
Scene 3: A Ball at the Castle
Siegfried must choose a bride from among the well-bred maidens who have been invited, but he remains indifferent to them all because he has given his heart to Odette. Only at his mother’s insistence does he dance with any of the prospective brides.
He must, however, choose one of them, and as a token of his love he must give his chosen bride a bouquet. As he faces this dilemma, however, a fanfare of trumpets heralds the arrival of new guests – the magician von Rothbart and Odile, his daughter. The Prince is struck by her resemblance to Odette.
Von Rothbart wants the Prince to fall in love with Odile so that he will break his vow of eternal love and fidelity; Odette will then remain in the sorcerer’s power forever. It is for this reason that he has given his own daughter Odette’s form and features. Odile seduces Siegfried, who is fascinated by her charm. He announces to his mother that the beautiful Odile is his choice. The wicked magician is jubilant.
Suddenly Siegfried sees a vision of the true swan-maiden outside the castle window and realises that he has been deceived into breaking his vow. In despair, he rushes to the lake to find his beloved Odette.

Act III
Scene 4: The Lakeside, at Night
The swan-maidens stand dejected and sad. Odette has told them what has happened.
Siegfried rushes in. He begs Odette to forgive him and he professes his undying love for her, but the enraged sorcerer summons the black swans and commands them to separate Odette and Siegfried. Siegfried grapples with the sorcerer. Fearless in the encounter, he breaks von Rothbart’s wing. The sorcerer collapses, his power gone, and he dies.
Love has broken the evil spell. The sun rises and shines radiantly on the Prince and Odette, and on the maidens whom Siegfried has rescued.

Swan Lake is a ballet without which it is impossible to imagine contemporary classical theatre, and in terms of its psychology it is bang up to date. The classical qualities of Swan Lakelie in the precise structural forms, in the strict classical school and in the traditional split of classical and character dance. Its psychology lies in the mysterious theme of duplicity and the well-developed theme of fate and destiny.
Nevertheless, when it appeared in 1877 there was no instant acclaim for Swan Lake. The production staged at the Bolshoi Theatre by Vaclav Reisinger was “one of many”, extremely traditional and in no way innovative. The famous “Russian soul” was absent in it, and neither was there the eternal symbol of Russian spirituality in the image of the Swan. And Tchaikovsky’s music, in turns mournfully aching, festively triumphant and menacingly fatal, was not regarded as a masterpiece for a long time to come. Initially, Pyotr Ilyich’s opus was received in a very restrained manner: people felt that the ballet was “poor in melodies” and the music “the weakest point of all.” The spirituality in the first production was hard to find: much was hidden by the corps de ballet which rigorously waved their cardboard wings at the premiere – today one could only imagine such a thing in a parody of the ballet! And only the name of Polina Karpakova, who went down in history as the first performer of the role of Odette (the name of the performer of the role of Odile was covered by three stars on the playbill), tells us that the history of the ballet did not begin in St Petersburg.
But it was in the city on the River Neva that the White Swan “built its nest.” Following a concert in memory of the composer at the Mariinsky Theatre in 1894, when Lev Ivanov showed a “swan scene” – gentle, tender and touching – Marius Petipa, the director of the ballet company in St Petersburg, finally resolved to stage Tchaikovsky’s debut in the dance genre at the Imperial theatre. The premiere took place one year later, in 1895. The conductor and composer Riccardo Drigo undertook a very tactical musical revision of the score – it is his version of the music for Swan Lakethat most choreographers follow. The Frenchman Petipa and the Russian Ivanov (the choreographers), the Italian Drigo (conductor and author of this version of the music) and Pierina Legnani as Odette-Odile – these are the creators of the famous myth of Swan Lake.
In the more than century-long existence of Swan Lake at the Mariinsky Theatre, the production has been radically altered on just three occasions, which, you must agree, is very little for a ballet that is over a hundred years old. The most radical, however strange it may seem, was by a woman – Agrippina Yakovlevna Vaganova, the famed teacher and excellent soloist (in Swan Lake, apropos, she did not particularly stand out at all). She attempted to simplify the mysticism of the libretto and the music, presenting the story of the swan-maiden as the sick hallucinations of an erudite youth, mercilessly killing off the protagonists with no right to resurrection in the finale (in the 1896 production Odette and Siegfried, once dead, were reunited in the afterlife). All that remains of Vaganova in the current production, however, is the “swan-like” turns of the arms and the dance meeting of Odette and Siegfried: Agrippina Yakovlevna, dissatisfied with the fussy pantomime nature of this scene, created highly imagistic choreography. Ten years later Fyodor Lopukhov, another classic of Soviet ballet, resolved to let the male protagonist live and moreover restored Odette’s human image – in the finale she became a woman. But this production too, memorable for von Rothbart’s excellent variation, remained in the theatre’s repertoire for just five years before it was replaced by the version of Konstantin Sergeyev, one of the finest Siegfrieds of all time anywhere, in which the dancer and choreographer, true to classical dance, combined the very best that had been created for Swan Lake in the course of half a century. Today, too, this production is considered the epitome of classical dance imagery. It was this version recorded on film that documents the lyrical dance of Galina Ulanova, the virtuoso sparkle of Natalia Dudinskaya, the classical perfection of Gabriela Komleva and the mutinous passion of Galina Mezentseva.
Olga Fedorchenko