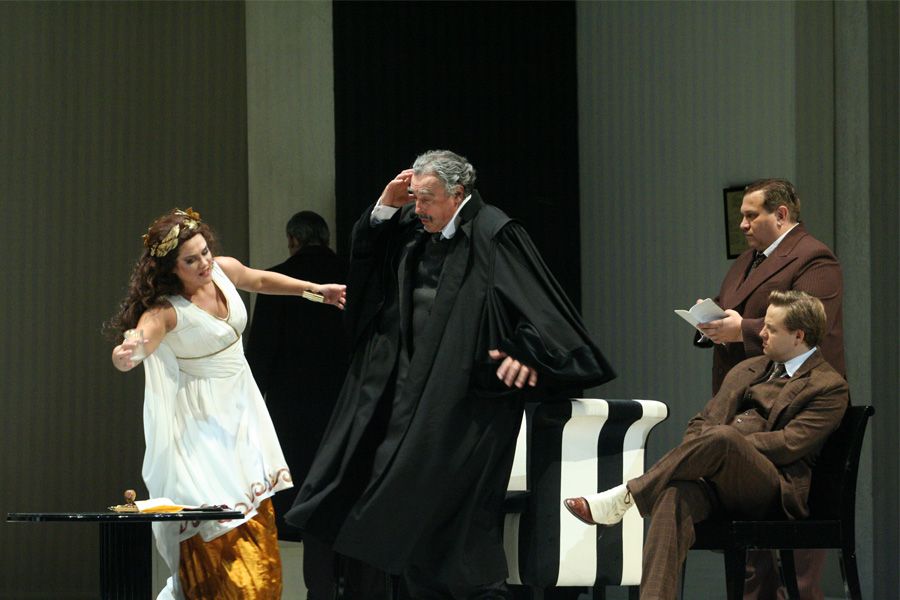 Music by Leoš Janáček
Libretto by the composer, after Karel Čapek's comedy

Hieronymus Makropoulos, Emperor Rudolf II’s personal physician, has prepared an elixir for the monarch that will extend his life and his youth for three hundred years. But the Emperor decrees that the physician first try out the elixir on his daughter Elina. Elina Makropoulos thus becomes immortal. But as the three hundred years come to an end, the effect of the potion wears off and to continue to live she must drink yet more. But Elina’s lover, Baron Ferdinand Prus, took the recipe for the elixir from Elina and failed to return it. And so, at the age of three hundred and twenty seven and under the name of the singer Emilia Marty, Elina Makropoulos wages battle to win the inheritance alongside her great-grandson Albert Gregor and Baron Jaroslav Prus by trying to gain access to the archives held at the Prus family estate. As a result of her scheming, Prus’ son Janek commits suicide. Elina is unmasked and, having told the story of her incredibly long life, she hands over the recipe for eternal youth to Kristina, Janek’s young beloved. Without any regrets Kristina burns the document, now yellow with age.

Leoš Janáček (1854 – 1928) had early disappointments in his librettists. Himself choosing his plots and writing the words to his music, he created original works the likes of which the operatic stage had never seen before. In his Příhody Lišky Bystroušky (The Cunning Little Vixen) animals and insects of the forest sing in a dialogue about the adventures of Mr Brouček, whose name literally means “shrimp”, gets drunk on beer and travels to the moon and then to the 15th century.
No less surprising is the plot of Věc Makropulos (The Makropulos Affair). In a letter to his muse Kamila Stösslová, Janáček explained it in brief: “The woman is three hundred and thirtyseven years old, yet she is still young and beautiful. And, you know, she is unhappy… We are happy as we know that life is short. And so we have to make the best use of every second we have.”
Elina Makropulos, who in the course of her amazingly long life has changed her name many times though has always retained the initials “E. M.”, was, for Janáček, the new embodiment of eternal femininity – and a new image of the icy Kamila, a woman thirty-eight years younger than himself and from whom he had waited fruitlessly almost nine years for some sign that the feeling was mutual.
Janáček worked on The Makropulos Affair from 11 November 1923 to 3 December 1925. The world premiere took place on 18 December 1926 at the National Theatre in Brno. This was followed by a production in Prague and later came performances abroad – in German translation.
The opera opens with a brilliant orchestral introduction, with constant changes of tempo and bar length, filled with different rhythms as if time itself were going in different directions and at varying speeds. After all, for the daughter of Hyeronimous Makropulos, one hundred years ago is as yesterday, and the passing of time easily becomes immovable eternity. In Janáček’s music the rhythm beats out simply, but in The Makropulos Affair the unexpected changes of tempo and the complex semi-rhythmic quality acquire a conceptual character. The present-day is fickle. The protagonists are in so much of a hurry that not all of the text is sung and sometimes it is merely spoken in one sound.
There are no arias or songs in The Makropulos Affair, and there is almost no “shared” singing – there is nothing that could impede the flow of the plot. The rhythms are mechanical, in the orchestra one can hear a telephone being imitated (a symbol of the new age), and the pressing, tense harmonies – in which there is something of Musorgsky – sound out and are so melancholy in this new, businesslike and cynical world. She who calls herself Emilia Marty appears and the factory-like, mechanical rhythm breaks off, the flow of time slows down, losing its precision. The vocal declamation is interspersed with islets of cantilena, and one can vaguely make out the bells of old Prague.
Janáček spent an entire year working on the third act of his opera until he found the solution, and then he wrote “fast, like a machine” and himself took pride in the result. In the epilogue of Čapek’s comedy the protagonists discuss the possibility of eternal life from purely practical, if not cynical, positions. Instead of this, Janáček wrote the scene of Elina Makropulos’ death – inspired, poetical and almost entirely in major key, as in death the heroine acquires the fullness that was lacking in her life.
Janáček thought about death a great deal. The composer eschewed funerals and hated death; in his coffin his face was a picture of wrath. Regardless of his adolescence, spent at the Augustinian Monastery in Brno, and the lengthy lessons he had in spiritual music he did not accept eternal life through religion. His pantheism was his spiritual cornerstone and a powerful source of his optimism. He would probably rather have agreed with Čapek that the only possible deathlessness of man lay in the natural succession of the generations.
Death comes to the various characters in Věc Makropulos in different ways. Gregor is prepared to commit suicide because of his debts, as his father did before him. Janek senselessly shoots himself because of his ill-fortune with love. Elina Makropulos flees from death, she hastens to find the recipe her father had written out in the 16th century; she finds it and does not succeed in making use of it… And then it transpires that she no longer has any need of the recipe because when the soul dies if it has been bound too long to the body then physical life becomes a mere transparent shadow of true life.
To the sound of a triumphant sarabande, Elina Makropulos leaves life behind and enters eternity. When Kristina burns the recipe of the Makropulos formula Elina dies reading the prayer Our Father in her native Greek. The ashes of her inhumanly long life are dispelled together with the ashes of the ancient parchment.
Anna Bulycheva

Age category: 16+
00:00
Update Required To play the media you will need to either update your browser to a recent version or update your Flash plugin.