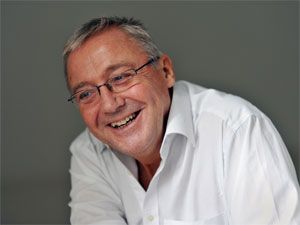 Graham Vick was a British stage director, known for his experimental and revisionist productions of traditional and contemporary operas, and he collaborated with the world’s great opera houses. He worked with many acclaimed conductors, among them Riccardo Muti, James Levine, Bernard Haitink, Valery Gergiev, Donald Runnicles, Seiji Ozawa, James Conlon and Zubin Mehta.

He was born in Birkenhead in 1953. Studied at the Royal Northern College of Music (Manchester). In his youth, with Scottish Opera (Glasgow) he assembled a small touring company, which travelled the Scottish Highlands with its productions. In the 1980s he staged Bernstein’s West Side Story, organising a team of three hundred unemployed young people at an abandoned mill in Yorkshire. From 1984 to 1987 he was stage director of Scottish Opera, occupying the same post with the Glyndebourne Festival from 1994 to 2000. In 1987 he was one of the founders of Birmingham Opera Company, which he directed until his death. In 2002–2003 and 2014–2015 he was a guest professor at Oxford University where he lectured on the art of opera.

He was an eight-times recipient of the Premio Franco Abbiati and a winner of The South Bank Show Award (1999 and 2002). He was a Chevalier of France’s L’Ordre des Arts et des Lettres and a CBE. Honorary professor of music at the University of Birmingham. Honorary member of the Royal Philharmonic Society (London). At the Mariinsky Theatre Graham Vick staged War and Peace by Prokofiev (1991 and 2014), Věc Makropulos (The Makropulos Affair) by Janáček (2010) and Boris Godunov by Musorgsky (2012).