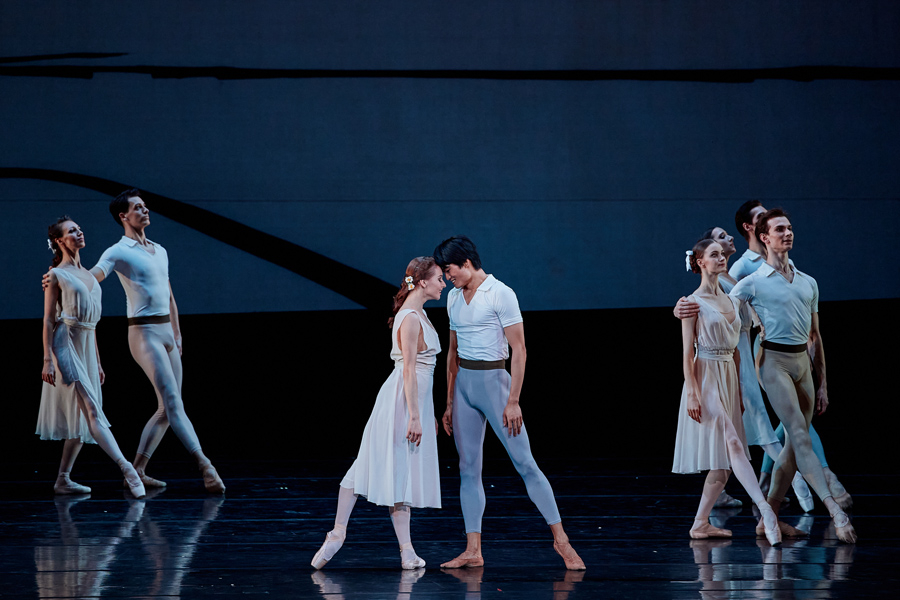 The Young Lady and the Hooligan
Leningrad Symphony
Concerto DSCH

ballet by Igor Belsky set to music by Dmitry Shostakovich

By the early 1960s a widely-developed mythology had sprung up around Shostakovich's Seventh Symphony: starting work on it in Leningrad when it was being bombed, the delivery of the score by plane to the besieged city (see Anna Akhmatova's Poem without a Hero), the live broadcast to the vanguard from the besieged city on the day it was supposed to be taken and so on. The composer himself – living and working – became in part a mythological character. In Zakhar Agranenko's fictional account Leningrad Symphony, which appeared on screen in 1958 and which is actually dedicated to the Leningrad premiere of the opus, Shostakovich was the only character who had a real name – and he never appeared on-screen, remaining a superhero of the myth. It is important to know all of this in order to comprehend the onus of the work undertaken by the choreographer Igor Belsky when working on the production of the ballet set to the music of the first movement of the symphony.
At the premiere, the ballet was called Seventh Symphony – a title drily generic in type and sterile. Perhaps thus Belsky hoped to distance himself from the ponderous and commital myth of this opus: there are many "Seventh Symphonies", but there is only one Leningrad. To begin with, the choreographer resolved the formal tasks. First this was to create an abstractly metaphoric and pure dance system – unlike the "realist", long-title-loving choreo-dramas of the 1930s-50s with props and antique furniture that were almost undanceable. Secondly, there was the creation of the dance structure, similar to the structure of the music, which subsequently was given the appellation of "dance symphonism".
Belsky had attemped to resolve these tasks earlier in the three-act ballet Shore of Hope (1959). In the twenty-five-minute-long Seventh Symphony this principle was taken to the very edge. The ballet's characters are the Youth, the Girl and the Traitor. The powers of evil are represented by conditional Barbarians, their roots suggested only by certain gestures and the brown colour of their costumes. The specific place of the plot is hinted at by the silhouette of a tower with a spire, given in several strokes on the white back-screen. The stage is generally empty, with only capacious rear-stage posters changing one after the other; the ballet was designed not by a major set-designer but by the graphic poster designer Mikhail Gordon. There are no destroyed Leningrad façades, anti-tank barbed wire, prop weapons, swastikas or real uniforms, as it could have been in a ballet about the siege even ten years ago.
The ballet was rehearsed "outside the plan", in non-working hours and to a tape recording (an innovation at the time). The Seventh Symphony – together with Grigorovich's Stone Flower – brought a new generation of young dancers to the stage, whose names today are associated with "The Thaw". Ballet's symbol of "The Thaw" was Yuri Soloviev's jump and leap as the Youth, the leap of "cosmic Yuri" as the dancer later came to be known (it was curiously fortunate that the premiere of Belsky's ballet took place two days after Gagarin's flight into space). The role of the Youth was also performed by Anatoly Nisnevich, Oleg Sokolov and Alexander Gribov; the role of the Girl was performed by Alla Sizova, Kaleria Fedicheva, Gabriela Komleva and Natalia Makarova.
Starting from the sixth performance (6 June 1962) the ballet was called Leningrad Symphony. Having won success with the audience and Communist Party approval, the production was spread out to other theatres in the Soviet Union. At its home theatre the production was revived in 1991 and reconstructed in 2001. In line with tradition, it is performed twice each season, on dates that are vitally important for the people of St Petersburg: the Day of the Lifting of the Siege of Leningrad and Victory Day.
Belsky's Leningrad Symphony was almost immediately named a turning point in the history of Soviet ballet and a direct descendant of Magnificence of the Universe, the legendary production of Fyodor Lopukhov to the music of Beethoven's Fourth Symphony, performed just once in 1923 leaving the audience completely perplexed. Belsky later developed his idea of the ballet-symphony in the immense Eleventh Symphony, set to the music of Shostakovich's eponymous work, at Leningrad's Maly Opera Theatre (1966). The experience was not so successful, and Belsky never staged a symphony again, though choreographic symphonism as a structural model and as an artistic ideology would for long be an idée fixe of Soviet ballet theoreticians.
Bogdan Korolyok