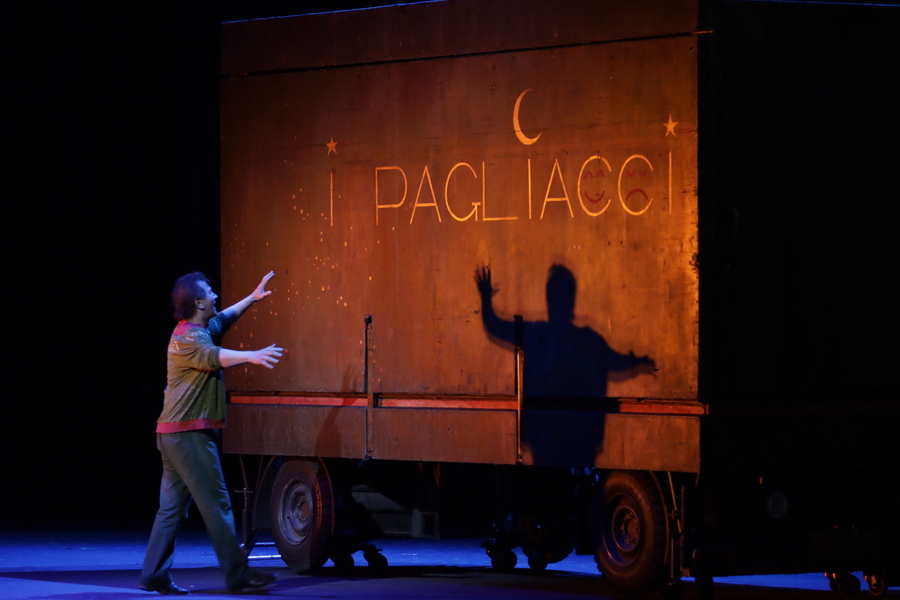 Music by Ruggero Leoncavallo
Libretto by the composer

PROLOGUE
Before the curtain rises Tonio appears dressed as a clown. He explains to the audience what they are about to see on stage. "Real are the tears and suffering that you are to see!" Tonio exclaims. "After all, an actor loves and hates just like everyone else, and a passionate heart beats beneath his clownish attire."

ACT I
The drama begins. A company of travelling comedians arrives in a small Italian village. The villagers joyfully greet Canio, the leader of the company, his actress wife Nedda, Tonio the clown and Beppe the actor. The performance will be in the evening, so one of the villagers suggests the comedians pass their time in the tavern. Canio and Beppe agree readily and ask Tonio to go too, but he declines. He is nursing a grievance against the company´s jealous leader for offending him. Canio´s jealousy is justified. In the village that they have come to Nedda has a lover – the young peasant Silvio. Left alone, Nedda dreams of meeting him. Having sneaked up unnoticed, Tonio declares his love for her. Nedda responds to the hideous clown´s declarations with derisive laughter, cooling his passions with a lash of a whip. Impotent with rage Tonio leaves, threatening revenge. Meanwhile, despite the danger, Silvio appears, sincerely and lovingly devoted to Nedda. He implores her to abandon her life on the road and run away with him. Suddenly the wrathful voice of the company´s leader is heard, Canio having rushed back to call for the offended clown. Silvio, however, manages to flee unrecognised. Canio insists that Nedda name her lover, but to no avail. Then he leaps at her with a knife. Beppe pulls Canio off and Tonio calms him, saying that the fugitive will return for the performance and there he will somehow give himself away. The show will begin soon…

ACT II
A merry crowd of villagers awaits the start of the entertainment. Tonio and Beppe show the audience to their seats; Silvio is among them. The plot being acted out is similar to the events in the actors´ own lives. Taddeo (Tonio) loves Colombina (Nedda), but she loves Arlecchino (Beppe). Pagliaccio (Canio) interrupts their rendezvous.
Colombina´s words of farewell to Arlecchino shock Canio – they are the same words Nedda spoke to her lover as he left. His jealousy flares up once more and in a fit of fury he stabs Nedda to death and then Silvio, who leaps onto the stage on hearing his lover´s dying scream.
"La commedia è finita!" exclaims Tonio.

Four men and one woman – the gender profile of Pagliacci stands apart for its blatant imbalance. Moreover, all four of the men have a claim, one way or another, on the only female protagonist: one merely shamming, the other three in all seriousness. a jealous husband, a passionate lover, a spurned admir-er – with Leoncavallo these are not standard operatic characters, but rather human souls turned inside out. On the surface it would appear that not one of these loves is pure, while underneath there is a network of passionate emotions, where alongside love there is pride, envy, lust and – first and foremost – the fear of loneliness. Verist composers considered that researching people’s genuine emotions (in-cluding those that are the most unsightly) with scrupulous accuracy was their duty, and alongside Mascagni’s Cavalleria rusticana, their artistic manifesto was to be em-bodied in the thirty-three year-old Leoncavallo’s opera.

Initially it’s name was slightly different – Il pagliaccio, in accordance with the tradition of indicating the titular character on the playbill. In actual fact, Leoncavallo’s opus is an opera “for a tenor”, with the tragic figure of Canio, the suffering clown, at its centre. the role of Canio with the famous aria “Vesti la giubba” lies among the gold reserves of the tenor repertoire. On the eve of the world premiere in Milan in 1892, however, the performer of the role of Tonio refused to come on-stage unless the title were to include his character too. And so in-stead of Il pagliaccio the opera came to be known as Pagliacci. the change from singular to plural gave the opera’s title ad-ditional nuanced meanings. How typical is “clowning around” of any person? Where is a man’s true face, and where is his social mask? the opera’s second act is structured around the principle of a Russian nesting doll, it is a play within a play: Canio’s travelling company acts out a piece of commedia dell’arte for some local res-idents. Gradually, real life takes over the stage, and the acting becomes ever more convincing, because it indeed ceases to be acting. Finally the stage is covered with blood – real and not theatrical blood.

Leoncavallo stated that he had borrowed the opera’s plot from a legal case that had actually taken place. One way or another, he has made the audience – those of us sitting in the large auditorium – into a kind of jury. In this incredibly compact story there is no moralising “from the author”, and the audience must pro-nounce its own verdict on the criminal. the staggeringly expressive music of Pagliacci could hardly make it accusatory. Khristina Batyushina

Running time: 1 hours 15 minutes
The Performance without an interval