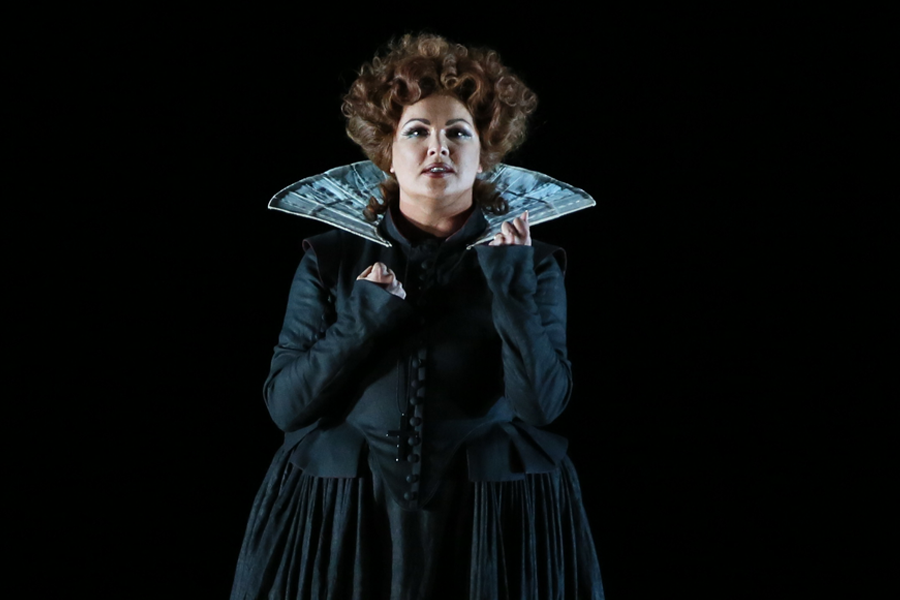 Music by Giuseppe Verdi
Libretto by Francesco Maria Piave, after the tragedy by William Shakespeare

Act I
Three witches appear and describe their evil deeds. When they hear a drum heralding Macbeth’s approach, they break into dance and song. Macbeth and Banco, two generals in Duncan’s army, arrive. The witches greet Macbeth as Thane of Glamis, Thane of Cawdor and King of Scotland; they hail Banco as the father of future kings. Messengers arrive to announce the fulfillment of the first prophecy. To Banco’s alarm, Macbeth reflects on gaining the throne. Lady Macbeth reads a letter from Macbeth telling her of his victory in battle and of the witches’ prophecy. She revolves to help him fulfil it. When a messenger announces that the King is on his way to the castle with Macbeth, she realises they must act that night and calls on the powers of evil to help her. Macbeth appears, and husband and wife quickly agree to the murder. King Duncan and his retinue arrive. A vision of a dagger prompts Macbeth to go and kill Duncan. But when he returns, wracked with remorse, his wife accuses him of cowardice. She snatches the dagger and goes off to the King’s rooms to incriminate the guards, returning with bloody hands to her now guilt-stricken husband. Macduff and Banco appear. While Macduff goes to wake the King, Banco reflects on the stormy night. Macduff discovers the murder and wakes the house. Everyone vows vengeance on the unknown assassin.

Act II
Macbeth is now King of Scotland and Duncan’s son Malcolm, blamed for his father’s death, has fled to England. Because the witches prophesied that Banco would be a father of kings, Macbeth and his wife now plot to kill him and his sons; Lady Macbeth is triumphant… Assassins in Macbeth’s service wait for Banco in the dark. He and his son Fleanzio arrive, Banco uneasy with foreboding. Banco is murdered but his son escapes.
Macbeth and his queen welcome guests to a feast and she proposes a toast. An assassin arrives and tells Macbeth what has happened in the park. Macbeth offers an explanation for Banco’s absence, but when he goes to sit down he sees the ghost of Banco. Lady Macbeth tries to calm her husband and the troubled guests. The ghost reappears and Lady Macbeth is unable to control her demented husband. The Scottish nobles fear their land is now in the grip of criminals and Macduff decides to join the exiles.

Act III
On a stormy night the witches invoke evil spirits as they brew their magic potions. Macbeth arrives and asks them to prophesy his destiny. In response they conjure up three apparitions who, in turn, warn him to beware of Macduff, that he need fear ‘none born of woman’, and that he will invincible until Birnam Wood marches on his castle. The witches then summon the apparition of eight kings who pass Macbeth, followed by Banco carrying a mirror. Terrified, Macbeth recognises them as Banco’s descendants. Macbeth faints and the witches dance round him, then disappear. Recovering, he vows to destroy Macduff and his family.

Act IV
Scottish refugees lament the suffering of their oppressed homeland and its wretched people. Macdufff is distraught at the news of his wife’s and children’s murders. Malcolm arrives, leading a troop of English soldiers, and urges Macduff to find comfort in exacting revenge. Malcolm rallies the refugees to join forces in attacking Macbeth, using branches from the wood as camouflage.
Lady Macbeth, who has taken to sleepwalking, describes and relives the atrocities she and her husband have committed. Macbeth, in desperation, awaits the advancing troops and reflects on his impending downfall. He is so distraught that he fails to react to the news of his wife’s death. When soldiers announce that Birnam Wood is on the move, he recalls the witches’ prophecy. A bare field. English soldiers carrying branches are advancing. Macbeth appears, pursued by Macduff. The other two prophecies are now fulfilled: Macduff reveals that he was not born naturally but surgically removed from his mother’s womb; in the ensuing fight Macbeth falls to Macduff’s sword. Malcolm is proclaimed King.

Macbeth – such is the title of Shakespeare’s famous tragedy and one of Verdi’s most popular operas. The titular hero of the opera is a Scots commander in whom the innate human flaw of vanity grows to become an irrepressible mania for power. “O, voluttà del soglio!” (“O, desire for the throne!”) sings his wife, the perfidious Lady Macbeth. The most fundamentally wicked couple in the history of opera, they act in tandem: he commits murder while she incites him to do so. Macbeth is a real “horror opera” with a fascinating mediaeval flavour: here witches cast their spells, there are ghosts, blades are dripping with blood, nobles feast and a sleepwalker roams through the castle. Verdi fully conveyed the seething nature of Shakespeare’s passions in his music. One of the most complex roles not merely in Macbeth but in the entire compendium of world opera is that of Lady Macbeth. Verdi conceived a heroine who was evil and ugly, though on the stage Lady Macbeth is a powerful and passionate woman whom her husband is quite simply incapable of opposing. This opera on a Scottish theme was staged at the Mariinsky Theatre by Scots stage director David McVicar.

Running time: 2 hours 55 minutes
The performance has one intervals