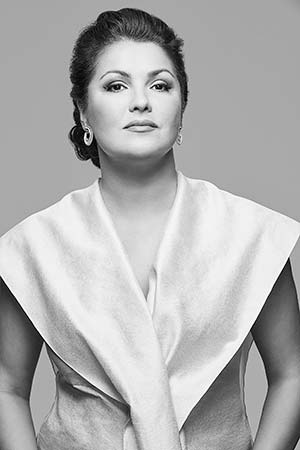 Anna Netrebko was born in Krasnodar. In 1991 she graduated from the College of Music of the Rimsky-Korsakov Leningrad (since 1991 St Petersburg) State Conservatory and entered the сonservatory (class of Professor Tamara Novichenko). In 1994 she made her Mariinsky Theatre debut as Susanna (Le nozze di Figaro), the next year appearing at San Francisco Opera as Lyudmila in Ruslan and Lyudmila. In the summer of 1996 she was a participant in the Merola Opera Program in San Francisco. In 1998 she was awarded the Casta Diva Russian opera prize for the role of Susanna in Le nozze di Figaro at the Mariinsky Theatre.

In 2002 she made her debut at the Metropolitan Opera in War and Peace (directed by Andrei Konchalovsky and conducted by Valery Gergiev) and at the Salzburg Festival in the opera Don Giovanni (directed by Martin Kušej and conducted by Nikolaus Harnoncourt). The stunning success in Salzburg has been just one of the highlights in Anna Netrebko’s artistic career. Soon afterwards she was given an exclusive contract with Deutsche Grammophon and created her first solo album.

Anna Netrebko has attained international acclaim by appearing in lyrical roles in operas by Mozart and the bel canto repertoire. In recent years the singer has been engaged in a repertoire of spinto and dramatic soprano roles. Her debut in the title role of Verdi’s Giovanna D’Arco at the Salzburg Festival in 2013 and her release of the Verdi album have both heralded this coup. Today the singer’s repertoire includes the roles of Leonora in Il trovatore and La forza del destino, Elsa in Lohengrin, Lady Macbeth in Macbeth, Tatiana in Eugene Onegin, Maddalena in Andrea Chénier and the title roles in the operas Adriana Lecouvreur, Manon Lescaut, Aida and Tosca.

One of the most celebrated opera singers of the present day, Anna Netrebko appears at the world’s great theatres.

As an exclusive artist for Deutsche Grammophon (since 2003) Anna Netrebko records frequently and has a large discography including solo albums, opera recordings and a concert repertoire. In November 2021 this label released her solo CD Amata dalle tenebre which features arias from operas by Cilea, Puccini, Purcell, Richard Strauss, Tchaikovsky, Verdi and Wagner, recorded under the baton of Riccardo Chailly at the Teatro alla Scala.

Anna Netrebko’s numerous prizes include an International Opera Awards for 2017 in the category “Best Singer”, the title of “Musician of the Year” from Musical America magazine (2008), the Opera News Award (2015), Germany’s BAMBI Award (2006), a Classical BRIT Award (2008) and eleven ECHO KLASSIK prizes.

In 2017 she was honoured by the Vienna State Opera with the title of Kammersängerin.