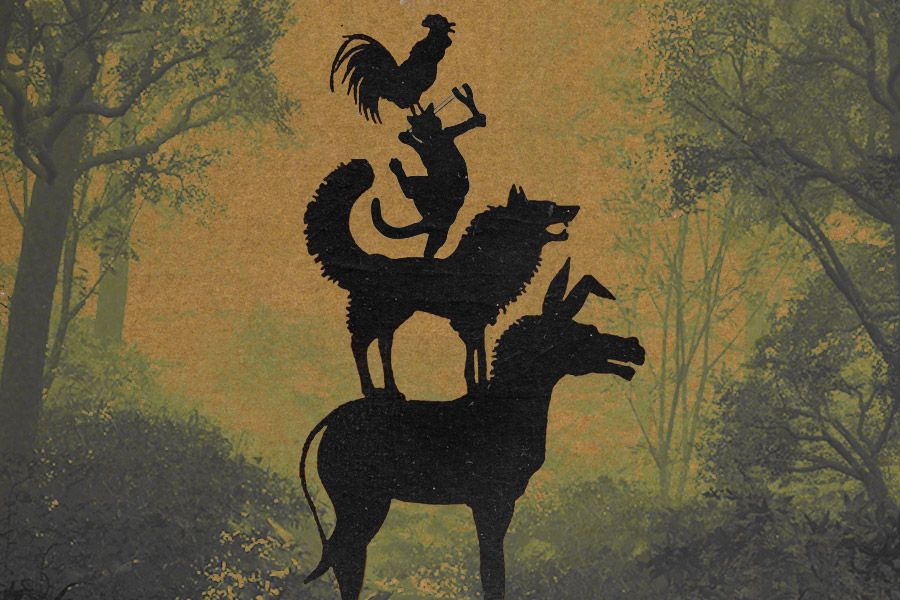 musical fantasia based on the tales of the Brothers Grimm

The travelling artistes the Troubadour, the Ass, the Dog, the Cat and the Cockerel set off, singing a song on their way to the royal palace where they are to give a performance. It is not just the curious townspeople who have come to see the joyous show – even the King and the Princess appear on the balcony. During the performance a youth and the Princess exchange glances and immediately fall in love. At the end of the show the Bremen town musicians form a gymnastic pyramid, but it collapses and the whole company falls directly beneath a window of the royal palace. The guards expel the luckless performers.

The despondent troubadour and his fellow travellers leave the town, while the Princess has nothing to do but lament, sitting in the palace. On a path in the forest the friends discover a hut where there is a feast underway with robbers headed by their chief. Listening to their song, the troubadour understands that they are planning to rob the King. In order to foil their plans, the musicians terrify the robbers who disappear.

The King and his guard go on a morning walk. The musicians, disguised as the robbers, attack the royal guards, tie the King to a tree and hide in the hut. The King fears the worst but the Troubadour and the company emerge to “save” the monarch who promises to give the Princess in marriage to the brave youth. The following morning after the grand and merry royal wedding the loyal friends and the beautiful Princess depart to seek out new adventures.

Gennady Gladkov (1935–) has composed the music for many cinema and TV films, cartoons and musicals, all of which have become incredibly popular, not least thanks to his music. They include the films Gentlemen of Fortune, The Twelve Chairs, The Dog in the Manger, An Ordinary Miracle and A Man from the Boulevard des Capucines and the cartoons Junior and Karlson, The Bluebird, How the Young Lion and the Turtle Sang a Song, The Blue Puppy and Thirty-Eight Parrots among others.
The cartoon The Bremen Town Musicians (1969) brought Gennady Gladkov fame throughout the Soviet Union. The musical fantasia based on the tales of the Brothers Grimm soon took on a life of its own on records, sales of which reached almost thirty million in the course of two years. Soon an eponymous musical was staged based on the cartoon, and The Bremen Town Musicians undertook a triumphant tour of theatres throughout Russia.
This year the adventures of the resourceful travelling performers headed by the Troubadour are to take place at the Mariinsky Theatre (production by Alexander Maskalin). Works by this director in the chamber Prokofiev Hall (The Brave Hare, An Opera about Porridge, a Cat and Milk and The Giant among others) have already proved popular with audiences.
There Is Nothing Better on Earth, They Say, We Byaki-Buki and Oh, the Guards Rise Early – these famous songs from The Bremen Town Musicians are to be performed by soloists of the Mariinsky Academy of Young Opera Singers and will probably be warmly met by both young audiences and their parents.
Olga Vokina