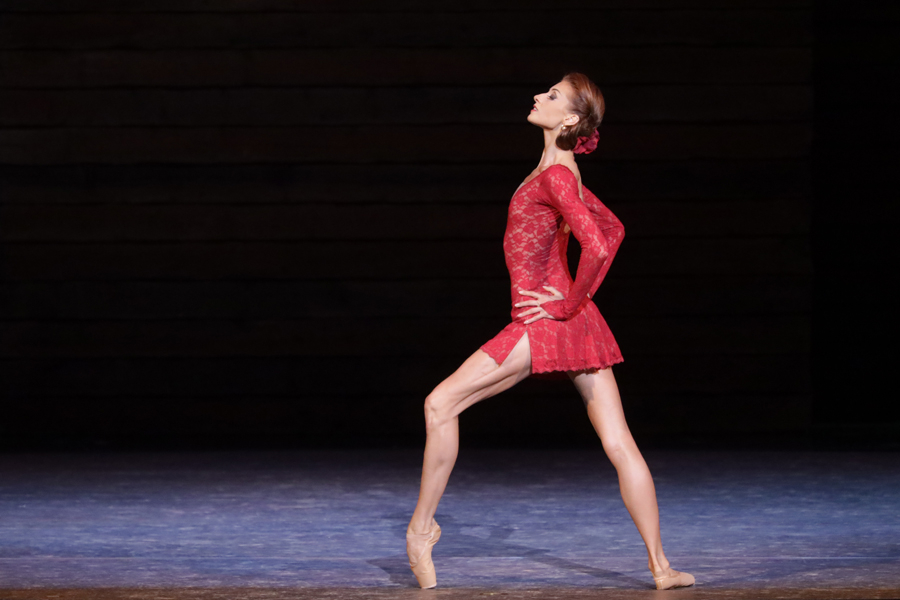 At the heart of the ballet lies the tragic destiny of Carmen the gypsy girl and José the soldier who falls in love with her, though Carmen abandons him in favour of the young Torero. The relationships between the protagonists and Carmen’s death at José’s hands is predestined by Fate. Thus the story of Carmen (in comparison with the literary source and Bizet’s opera) is presented symbolically, which is reinforced by the unity of the setting of the plot (an arena which hosts a bullfight).
Violetta Mainietse

Carmen Suite was first staged in Moscow in 1967 by the Cuban choreographer Alberto Alonso for Maya Plisetskaya, at her own request and at his own desire. The music for the ballet is a transcription by Rodion Shchedrin of Georges Bizet’s grand opera.
At that time there was no talk of foreign choreographers, though a politically-motivated exception was made for the Cuban – following the Cuban Missile Crisis things were different. But those who allowed it could not have imagined what they were getting involved in.
First of all, the ballet was provocatively un-classical; Plisetskaya paced across the stage not en pointes but in plain shoes, neither did she wear a tutu, but rather in a risqué short skirt, and her body did not look remotely balletic. And in general the ballet was intense in utterly impermissible passion, true eroticism and the equally impermissible – and so intoxicating! – idea of freedom that was so clearly expressed in it that it could never be shown in any Soviet theatre.
But it happened – for the same purely political reasons. The final decision was preceded by a battle between two women. “You are a traitor of classical ballet!” exclaimed the Minister of Culture Yekaterina Alexeyevna Furtseva with pathos, “Your Carmen will die!”; “As long as I live Carmen will not die,” replied – with just as much pathos – Maya Mikhailovna Plisetskaya.
Carmen did not die – she was to be one of Plisetskaya’s major roles, her calling card, and not because Plisetskaya danced this ballet longer than she did Swan Lake or Don Quixote, but because the image of Carmen was the best expression of her individuality and her expressive and dazzling gift; impertinence in character and impertinence in dance, a passionate nature and musical subtlety, a loving challenge and a challenge to the canons of dance. And a sharp silhouette, a vivid profile, and heat and tragedy.
Apropos, the non-Russian Alonso actually staged it even more freely and radically; it is known that Plisetskaya and Fadeyechev asked him to control his ardour and reduce the erotic element so that the ballet was not totally banned. This took the heat out of Alonso, but even in such form the authorities were in a state of apoplexy. Alonso spoke of how in this work he had combined the classics with elements of Spanish and Latin American dances. But more than that, he had included, if not “modern” dance, it was a totally new, unheard-of expressionism in the USSR. It was constructed on two dance postulates: the classics taken to the extreme – iron-like movements, iron-like poses, pointes as if nailed to the floor, battements tendus and bodies taut like a string (that’s where the classics blend with Spanish dances), and here we have an utter rejection of the classics, he rejection of any carcass – the same feet “digging”, the hot response of the body and, ultimately, those turned-out poses that make the fateful woman Carmen seem like a stubborn girl. Alonso also said that he was inspired to produce his Carmen by dramatic theatre – the movements have to “speak”. Since then much has happened in dance and now it seems so clear, but there is something else that is much more important: back then, in the Thaw of the 1960s this ballet was part of a general theatre context – the Taganka Theatre had been on the go in Moscow for three years, and Carmen Suite with its – for the time – shocking conditionality and asceticism of stage space were at the cutting edge. Apropos, in the acclaimed Taganka production of The Good Man from Sechuan there was a mise-en-scène in which the characters sat on chairs set in a semicircle – a motif comparable with a similar motif used by Boris Messerer in his set design’s for Carmen Suite. In Moscow Carmen Suite was Plisetskaya’s “best” ballet – without Maya it did not exist, and neither did Maya exist without it. But there were other performers of it throughout the world. Also in 1967, Alonso staged it in Havana for the great Alicia Alonso (having taken into account the Moscow censorship “corrections” and restoring the passion cut from the duets) and then produced it internationally, moreover not staging just the same production but variations; each time the chorographer has brought something new to Carmen.
In Moscow the ballet only existed as long as Plisetskaya danced; she has gone and only the legend of Carmen remained. But twenty years passed and the Bolshoi Theatre took a risky yet victorious step – for Maya Plisetskaya’s jubilee year her Carmen was revived, as a tribute and as a homage. The elderly Alonso came, too, and staged another new version for the theatre’s prima ballerina Svetlana Zakharova; then came other performers and the ballet now sits firmly in the repertoire. The legend has become a classic. “Now Carmen will never die,” Plisetskaya said.
In 2007 during a tour to the Bolshoi Theatre Ulyana Lopatkina appeared in this ballet. She presented her own interpretation, her own vision of the role. The new Carmen was externally reserved; her passions were all on the inside, rarely coming to the surface. But the theatrical iron of Lopatkina’s Carmen is less of a contrast between classical plastique and free plastique as it is a sharp plastique accentuation of the music – it is from this sharpness and these accents that the image itself was born.
Today Moscow’s Carmen can be seen at the Mariinsky Theatre, at last joining the repertoire’s legacy.
Inna Sklyarevskaya