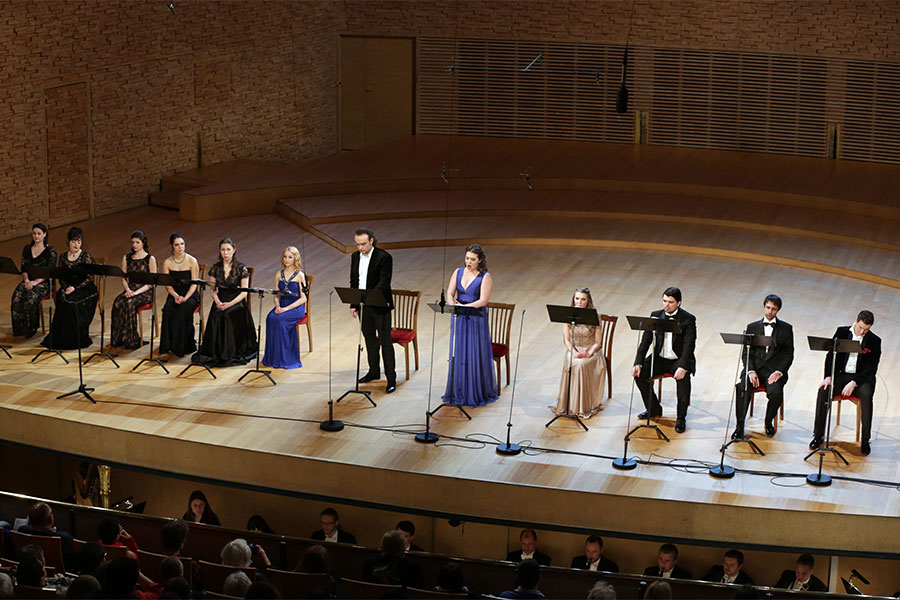 The garden of the bailiff's house. Dusk. The widowed bailiff is teaching his children a Christmas cantata. Elderly friends of the bailiff, the burghers Johann and Schmidt enter, and they propose having a celebration with the bailiff. The dreamy youth Werther appears. Looking at the garden, he speaks delightedly of the beauty of the surrounding nature. The bailiff's daughter Charlotte enters; Werther has come to see her so that together they can set off for a ball in the suburb of Wetzlar. The children, envious of Charlotte, run to her in noisy joy. Charlotte, tenderly caressing them, serves them dinner. Submitting the care of the children to her sister Sophie, Charlotte and Werther depart.

Night falls. Charlotte's betrothed, Albert, who has been away travelling approaches the bailiff's house. Sophie welcomes him in delight. Albert asks her about Charlotte. On discovering that Charlotte is at a ball, he makes as if to depart, promising to appear the next morning. In the moonlight he dreams of his dearly beloved Charlotte and seeing her soon. He leaves. Charlotte and Werther appear at the garden gate, having returned from the ball. Werther declares his love for Charlotte. Just then the voice of the bailiff can be heard, calling on Charlotte and hastening to inform her of Albert's return. Charlotte is stunned by the news and can barely find the energy to explain to Werther that Albert is her betrothed, chosen for her by her late mother. A square in Wetzlar. Johann and Schmidt, sitting in an inn, are chatting over a glass of wine. Charlotte and Albert appear. They tenderly speak of their happy married life. Werther comes to the square, with undisguised anxiety observing the couple from a distance. He is tormented by agonies of jealousy, as he still loves Charlotte. Albert, having led Charlotte to the church, returns and approaches Werther.

Albert shares some friendly words with Werther. Sophie invites him to dance, but Werther waits for Charlotte near the church. When she comes out, Werther again declares his love for her. Charlotte quietly reminds him that she is married and that Albert loves her. She advises him to go away and come back for Christmas. During his absence, his suffering will lessen and he will once again be master of his own heart. Charlotte departs. When Sophie appears, Werther decisively informs her of his departure. Sophie, stunned at this unexpected news, throws herself at him to try and stop him, but Werther hastens away. A golden wedding cortège appears, accompanied by cries of "Vivat!" all through the square.

The drawing room in Albert's house. Charlotte is sitting thoughtfully at the writing desk at the window. Unable to forget Werther, she takes his passionate letters from a drawer in the writing desk and reads them over with tears in her eyes. Sophie enters, merry as always, but on seeing the confusion and sadness in Charlotte's face she worries and tries to console her sister. Once Sophie has gone, in despair Charlotte violently drops to her knees and prays. At this time the door opens and Werther walks in. Charlotte is perturbed but, trying to master her own self, replies that everyone had been waiting for him here and that all will be pleased to see him. The surrounding atmosphere awakens in Werther a memory of former happiness. Charlotte, too, is touched; involuntary tears swell up in her eyes. Seeing her tears, Werther can restrain himself no longer and, falling at her feet, begs her to respond to his love. In reply to his insistent pleas, Charlotte kisses him, but immediately runs into the next room and locks the door. Werther, understanding that all is over, leaves with thoughts of suicide. Albert appears, knowing that Werther has returned. Seeing his wife's confusion, he questions her sharply. But just then Werther's servant hands Albert a letter: Werther, planning to go on a long journey, asks his friend to lend him pistols he has seen in the house. As he reads, Albert worriedly follows the expression of Charlotte's face and convinces himself that she loves Werther and is anxious about him. Albert coldly asks Charlotte to give the weapons to the servant. She obeys his request, but subsequently quickly leaves the house in order to save Werther.

Christmas Eve. The moon has lit up the town which is covered in snow. The study in Werther's house. The fatally injured Werther is lying on the floor. The door bursts open and Charlotte comes in. Seeing the blood-covered Werther, she screams in terror, drops to her knees and embraces him. Werther dies.

At that time, from the house of the bailiff children's voices can be heard singing a Christmas cantata.


While Goethe’s 1774 novel The Sorrows of Young Werther was a great success, Massenet’s opera Werther, written almost 100 years later, was at first modestly received. The story of a poet whose love for a married woman leads him to commit suicide was revolutionary at the dawn of Romanticism, but was hardly sensational by the end of 19th century. Léon Carvalho, director of the Opéra-Comique and the leading stage director for Massenet’s operas, also deemed the story “too serious”. As a result, Massenet’s most celebrated opera received its premiere only five years after its creation, in Vienna. Carvalho, impressed by the production’s success, premiered Werther in Paris shortly after its Vienna premiere.
Massenet, being an experienced playwright, saw the operatic potential in the famous romantic story. However, major changes to the story had to be made. Massenet’s Charlotte, unlike Goethe’s character, is in love with Werther; her marriage is the only thing standing in the way of the lovers. Thus, Goethe’s monodrama is replaced by the story of a tragic, but mutual love. The phenomenal duet of the two main characters comes to the forefront, while almost all the other characters stay out of the spotlight. The impressionistic orchestral range and enchanting melodies freeze the time and bring into focus the vicissitudes of the lyrical story (other storylines are hardly present in the opera). The emotional charge per unit of music is a challenge to most singers; that is why the parts of Werther and Charlotte remain among the most complicated ones in the romantic operatic repertoire, all the while being the most sought-after.
Yekaterina Yusupova

Running time 2 hour 40 minutes
The concert has one interval