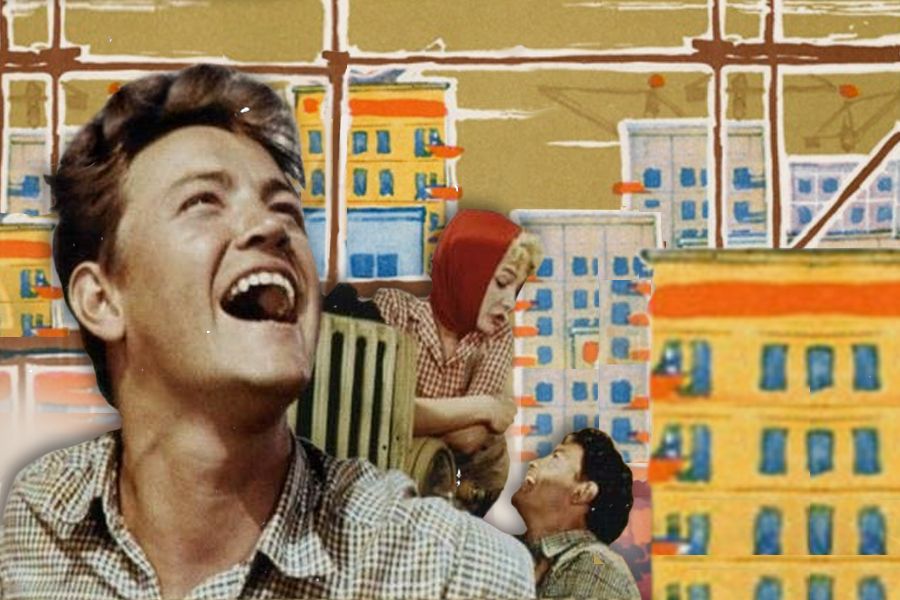 When the composer of the very recently premiered Eleventh Symphony (1905) agreed to the proposal to write a musical comedy he staggered many of his dedicated followers. They had forgotten the fact that Shostakovich loved and was able to make his laughter infectious through music – we can hear this in his most tragic symphonies and in his works for theatre, his operas, his ballets and his comet-like ballet and jazz suites. They had forgotten that Shostakovich was not ashamed of his love of “easy listening” – musicals, gypsy song and jazz. They had forgotten that in the 1930s the Maly Opera Theatre had commissioned Shostakovich to re-orchestrate Strauss’ operetta Wiener Blut, and he had confessed his love for Offenbach more than once “in word and in deed” (it suffices to recall that he composed the music for the silent film New Babylon).
It is interesting that twenty years earlier Soviet Music (No 9-10, 1939) declared that “Shostakovich has completed his Sixth Symphony and is working on the operetta The Twelve Chairs after the eponymous work by Ilf and Petrov.” One can only guess why the idea never came to fruition; the probable reasons – and, of course, the possible censorship issues – that would certainly await this not entirely ideologically restrained plot... After all, just three years earlier Shostakovich’s vaudeville ballet The Limpid Brook based on a “collective farm” theme following after the opera Lady Macbeth of Mtsensk had met with harsh criticism in the newspaper Pravda (the editorial entitled “False Ballet” appeared just a few days after the sadly famous “Muddle instead of Music”).
The plot of the operetta Moscow, Cheryomushki proposed to Shostakovich in 1958 was absolutely Soviet. The libretto by Vladimir Mass and Mikhail Chervinsky related how Muscovites from communal flats moved to their own apartments in the newly-built Cheryomushki district. Funny, touching and, at times, semi-criminal collisions accompanied this “great migration of peoples”. And Shostakovich gave this innocent vaudeville vivid and submissively merry music.
In his New Year interview for Soviet Music (1959, No 1) Shostakovich declared in the same Soviet “newspeak” that “In merry and dynamic form the theme of the operetta touches on the incredibly important issue of the construction of housing in our nation...” But this is also where he discovered his own interest in this “incredibly important issue”: “Here there is lyricism, a ‘cascade’, various intermedia, dances and even an entire brief ballet scene. In terms of the music, there are at times attractive parody elements quoting popular motifs from the recent past as well as several songs by Soviet composers.”
Moscow, Cheryomushki is a revue production, a divertissement performance, a unique kind of interpretation of the traditions of musical comedy from Offenbach to Dunaevsky. The leitmotif song Moscow, Cheryomushki is an “everyday” waltz, the melodic features of which bring to mind the popular song There Were Happy Days. For the aria of the heroine recalling her school years Shostakovich the melody of his own brilliant Song of the Counterplan. He also “smuggled” his stunning ballet music into the score of the operetta , while for the parody scenes and ballet intermedia he used In the Garden, at the Allotment, The Moon Is Shining and Ah, You, Inner Porch, My Inner Porch, the Oira dance popular in the early 20th century and even the thieves’ song Fried Chicken...
Critics were swift to praise Shostakovich for his sensational “turnaround in creativity” and the operetta was staged everywhere – both in the USSR and in countries with “people’s democracies”; in 1962 the Lenfilm studios filmed Cheryomushki featuring renowned actors and singers. Today, following a lengthy interval (due, first and foremost, to the typically Soviet libretto), Shostakovich’s operetta – like his early ballets – is again worthy of our attention for its musical qualities. Shostakovich youthfully mischievous, Shostakovich laughingly returns to the stages of musical theatres.
Iosif Raiskin