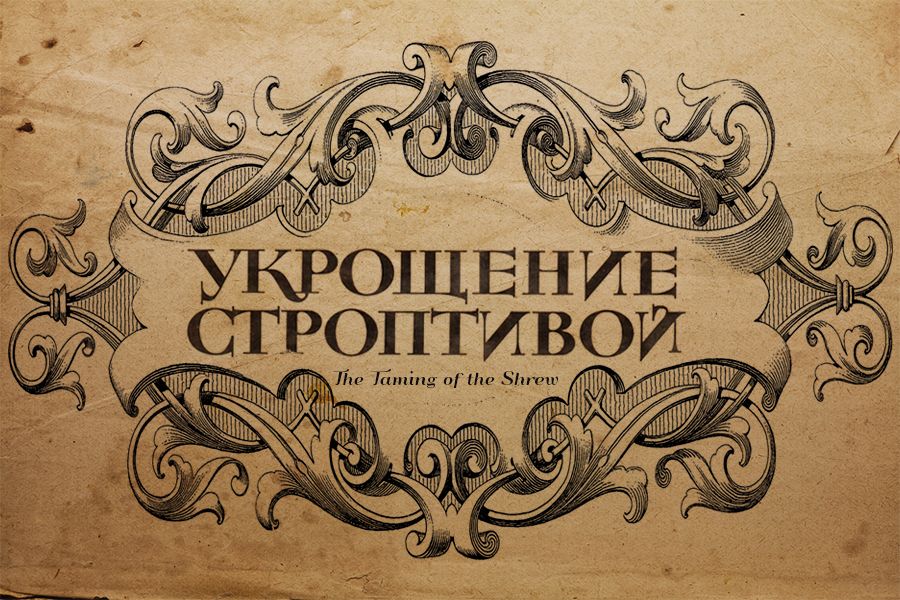 The Taming of the Shrew

Act I
Night in Padua. Hortensio and Lucentio meet in front of the merchant Baptista Minola’s house; they are in love with his daughter Bianca. Because of a flower she has thrown between the rivals, a quarrel breaks out, leading to a duel. At the furore, the neighbours and servants rush to the scene. Baptista himself comes, despairing of finding peace in his own home. He is tired of the escapades in which his eldest daughter the shrewish Katherina is constantly embroiled: her latest scandal has the entire neighbourhood up in arms. Minola dreams of finding tutors who, with the right tuition, could soften the girl’s disposition. The prospective grooms, interrupting one another, ask for Bianca’s hand in marriage, but the merchant is unwilling: his eldest daughter should marry first. He promises Bianca to one of the lads if they can find teachers and a husband for Katherina. Bianca appears on the balcony of the house and the young men ask her to determine their fate. Listening to their declarations, Katherina pours cold water over the luckless men and leads her sister away.
Lucentio and Hortensio meet Petruchio, who has just arrived in Padua to make a gainful marital match. On learning about the rich but shrewish daughter of Baptista he immediately resolves to marry her. He is not put off by the girl’s unruly temper. Petruchio makes a bet with Bianca’s two prospective grooms that in one month’s time Katherina will become obedient and meek. He promises to take them into Minola’s house as teachers.

Act II
Katharina laments alone in Baptista’s house. She is incensed at the barter going on behind her back between her father and the prospective grooms; her sister’s false modesty is also anathema to her. Meanwhile, Petruchio is welcomed into the house along with Lucentio and Hortensio as Latin and music teachers. Petruchio asks for the hand of the elder daughter. Minola is stunned at this guest’s energy. While they are discussing the marriage contract, their servants Grumio and Biondello are arguing as to which will “wear out” and “tire out” the other first – Katharina Petruchio or vice versa?
The pretend tutors teach the merchant’s daughters about the fine arts. Lucentio and Bianca’s lesson in Latin poetry ends with a declaration of love. The second tutor is less successful: his disobedient pupil smashes a lute over his head. Now the furious Katherina must meet with Petruchio. But in vain does she launch into cheeky jokes and insults – it is as if Petruchio does not notice them. To the returning Baptista he declares that Katherina has agreed to marry and the wedding will take place tomorrow.

Act III
The guests have gathered for the wedding, but the groom is absent. Both father and daughter are worried: if Petruchio does not appear he will bring shame on the family. The guests learn from Biondello that the groom is on his way and has alarmed half the city with his extravagant appearance. Petruchio himself finally arrives – in torn clothes and on an old horse. He refuses to change his dress and forces the bride to be similarly attired in rags – “family relics” left by his great-grandmother. Her refusal is met by him as an affront to his family. Katherina is forced to submit. Meanwhile, Lucentio and Hortensio declare their love to Bianca. She chooses Lucentio. With his rough demeanour Petruchio ruins the refinement of the wedding ritual, and on return from church he resolves to be off with his wife from the reception immediately. Neither pleas nor entreaties have any effect on him. Seizing a sword and overturning the tables laden with food in the direction of the frightened guests, Petruchio leaps onto his horse and gallops off with Katherina.

Act IV
Scene 1
A storm. Petruchio’s country house. The servants Grumio and Curtis are discussing their master’s wedding. The young couple appears. Katherina is hungry, tired out by the journey and the poor weather. Petruchio does not let up; he forces his wife to see youthful beauty in the drunken old servant and sends all the food back saying it is overcooked. Katherina asks Grumio to give her something to eat, but he – loyal to his master’s orders – offers just mustard. Unable to bear this mockery, Katherina flees from the house. Petruchio and the servants set out to find her. Katherina is brought back senseless.

Scene II
A month has passed since the wedding. Katherina is living in Petruchio’s house, as before suffering from his eccentric undertakings. She has fallen in love with her husband, yet her pride will not allow her to admit it. A tailor brings a dress with which Katherina is enchanted, but Petruchio tells her it is badly sewn. Upbraiding her husband for his abuse and mocking, in response Katherina suddenly hears words of love in response. The explanation is interrupted by some guests – it is Baptista with Bianca and Lucentio. The sisters go into the kitchen. Taking advantage of their absence, Lucentio reminds the others of the bet and says the wives should be brought back: the one who returns at her husband’s wish first will be the more submissive. To everyone’s surprise it is Katherina and not Bianca who has been “tamed”. Petruchio accepts the congratulations and admits that he is overcome with love. He receives the same admission in reply. All praise the great power of love.

The Taming of the Shrew after the comedy by William Shakespeare is the only opera written by Vissarion Shebalin (1902–1963). The idea for the work emerged when the composer had been evacuated and was living in Sverdlovsk. Initially Shebalin wanted to write an operetta, but the music was too serious and the work was transformed into an opera.
The libretto was written by Abram Gozenpud, Head of Literature of the Sverdlovsk Musical Comedy Theatre, who later became famous as the author of the fundamental encyclopaedia Russian Opera Theatre. Gozenpud was also a historian of literature and translator of Shakespeare. However, despite his thorough knowledge of the source material in many scenes in the libretto he departed from the original. Shebalin was satisfied – following the premiere he replied to compliments with the words “it contains a strong libretto.”
Following on from operetta, The Taming of the Shrew attained clarity of form, it was easy to grasp the solo vocal parts played a huge role – arias, ariosos and songs. These include Petruchio’s monologue “She fell in love with me for my bravery”, a parody of Otello’s monologue “She fell in love with me for my torment”.
Tragic events of 1948 influenced the work as it progressed. Having only just received the title of People’s Artist, Shebalin was unceremoniously fired from his post as Director of the Moscow Conservatoire and was banned from teaching. Having suffered a heart attack, he completed the score using his left hand as his right was paralysed. Nevertheless, this opera about Italians during the Renaissance era is full of optimism. The songs about love in it are merry ones, in a similar spirit to Prokofiev’s Betrothal in a Monastery.
At that time Kiss Me, Kate by Cole Porter, based on the same comedy by Shakespeare, appeared in the USA. In the 1950s, thanks to a screen version, it became known in the USSR, and critics made their point very clearly: “While American businessmen selected Shakespeare’s timeless comedy from the genre as a means of advertising ‘jazz and the American way of life’ the Soviet composer interpreted it as a hymn of all-conquering love. While the comedy – even in its native country – is generally seen firstly as a view of rough male power with its physical superiority overcoming womankind, Soviet operatic theatre has succeeded in depicting the poetic beauty of distinctive and real human characters, equals in their own emotions. ‘Wherever love’s light has shone there are no lords or slaves!’ This phrase taken from Petruchio’s declaration of love in the finale of the opera could serve as an epigraph to Shebalin’s whole work.”
In 1955 VTO Soviet Opera Ensemble gave a concert performance of The Taming of the Shrew. The stage premiere took place on 25 May 1957 in Kuibyshev. On 6 August the same year it was performed for the first time at the Bolshoi Theatre and the music immediately recorded. The Taking of the Shrew began its triumphant “procession” to various Soviet theatres. Performers of Shebalin’s opera have included Galina Vishnevskaya, Tamara Milashkina, Yevgeny Kibkalo and Arthur Eisen. In 1959 the work was staged at the Opera Studio of the Leningrad Conservatoire.
Anna Bulycheva