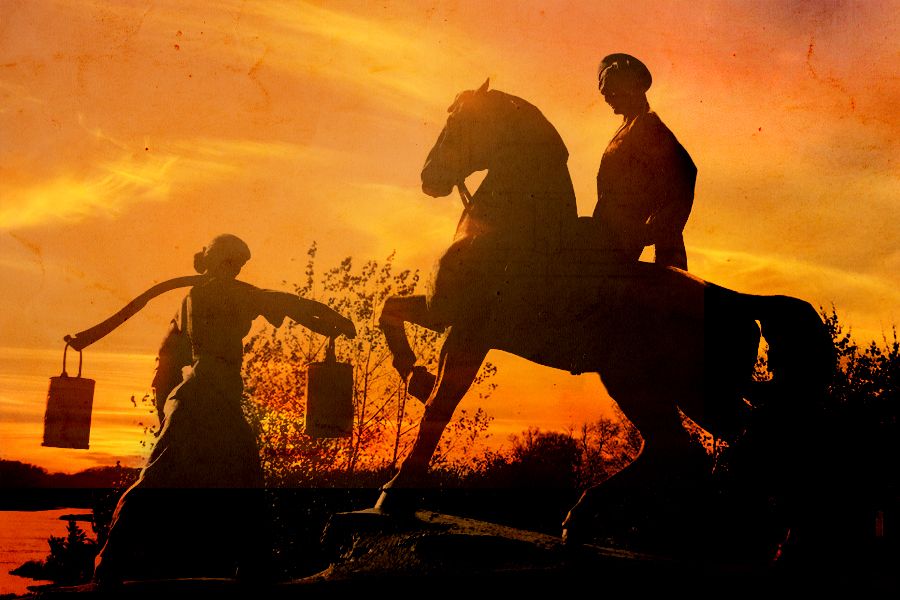 The name of composer Ivan Ivanovich Dzerzhinsky (1909-1978) is known today primarily for his opera Quiet Flows the Don based on the first and second books by Mikhail Sholokhov.
Having taken his first music lessons in his hometown of Tambov, Dzerzhinsky studied in Moscow (at the 1st State Music Training College under Boleslav Yavorsky and at the Gnessin Musical College in the composition class of Mikhail Gnessin). In Leningrad from 1930-1932 he continued to study at the Central Music Training School (class of Pyotr Ryazanov). The composer’s early works include A Poem about the Dnepr, Northern Songs and Spring Suite for Piano. This was the time when Dzerzhinsky also composed his first opera, Quiet Flows the Don.
At the recommendation of Dmitry Shostakovich the opera was accepted for a production by Leningrad’s Maly Opera Theatre (the premiere taking place on 22 October 1935 under the baton of Samuil Samosud). The first publication of Quiet Flows the Don came with a dedication to Dmitry Shostakovich who had given the young composer great assistance in formulating the idea and writing the score of the opera. But in the second edition of the score Dzerzhinsky removed the dedication. A performance of Quiet Flows the Don at the Maly Opera in Moscow pleased Stalin (with its simple and “democratic” language and revolutionary theme) and was immediately staged at the capital’s two opera houses – the Bolshoi and the Nemirovich-Danchenko Musical Theatres. The country’s leader preferred Dzerzhinsky’s opera to Shostakovich’s Lady Macbeth of Mtsensk, which received the monstrously unjustified criticism in Pravda of “Muddle instead of music”.
Quiet Flows the Don was performed at most theatres of the Soviet Union, giving birth to the genre of songful opera that entirely matched the commandments of socialist realism. Yesterday’s apologists of Shostakovich’s masterpiece extolled Dzerzhinsky’s opus. “On the stage once more we have people with living intonation and natural habits, the melodies were animated through their songful nature, the lyricism emerged as an expression of a healthy feeling” (Boris Asafiev). Even more so, comrade Stalin himself highly praised Quiet Flows the Don – the composer wrote of this in delight in the pages of Leningrad Pravda in an article called We Are Creating Soviet Classical Opera. Yet Dzerzhinsky’s subsequent works did not justify such lofty aspirations.
According to the authoritative researcher Abram Gozenpud, “in Quiet Flows the Don – Dzerzhinsky’s finest opera – there are vividly expressed facets of the composer’s talent: the attainment of national songfulness while rejecting quotation-mongered folklore, a melodious gift, a sense of theatricality. The composer has succeeded in conveying the drama of Grigory’s destiny, and in particular that of Aksinia. But at the same time the music is devoid of symphonic development. The richness of musical forms is insufficiently employed, and in particular the composer completely rejects ensembles.”
Some of the opera’s most memorable pages include the lyrical scenes and Aksinia’s arioso Dear Valley, Natalia’s Such Flowers Will Be Spared by the Frost and the lengthy peasant chorus On Foreign Soil We Lamented. The chorus Oh, for Such Disaster to Occur is restrained in the character of a folk chant; the thoughtfully majestic chorus Oh, Our Quiet Don Is Proud is truly poetic. A real “hit” at the opera house, concert hall and with folk choral ensembles was the final chorus – the military marching song From Country to Country.
In 1967 the composer wrote the opera Grigory Melekhov, completing a musical version of Sholokhov’s epic. And it is the final chorus of Quiet Flows the Don, which has become truly folk-like in nature, that is performed directly after the overture to Grigory Melekhov, thus uniting the opera “serial” separated by three decades. The premiere of Grigory Melekhov took place at the Kirov Theatre in 1967 under the baton of conductor Konstantin Simeonov.
The destinies of the protagonists of Sholokhov’s novel are well known to all Russian readers. We experience these destinies again, absorbing the music that casts a reflected light on pages of a book, it creates an echo in the audience’s hearts.
Iosif Raiskin