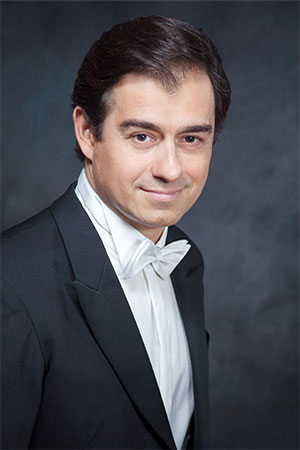 Vladislav Karklin was born in Leningrad. Studied at the Glinka Choral School, later graduating with honours from the St Petersburg Conservatoire (clarinet class of Professor Adil Fyodorov). Throughout his years of study at the conservatoire he attended the symphony conducting class of Ilya Musin, and in 2000 he trained under Professor Alexander Titov. In 1997 he completed a postgraduate study at the Robert Schumann Hochschule für Musik (clarinet class of Professor Ernst Kinderman), while in 2002 he studied piano and symphony conducting (classes of Wolfgang Trommer and Lutz Herbig).

He began his professional career in 2001 at the Opernhaus Wuppertal (Germany). From 2005 to 2009 he was Deputy Principal Conductor and Artistic Director of the Stadttheater in Passau (Germany), from 2009 to 2011 he was Guest Conductor of the St Petersburg State Academic Symphony Orchestra and from 2010 to 2013 he was a conductor at the Staatstheater Darmstadt (Germany).

As a guest conductor he collaborates with the Greater Anderson Musical Arts Consortium (USA), the Mikhailovsky Theatre, the Yekaterinburg Opera and Ballet Theatre, the St Petersburg Philharmonic, Moscow’s Helikon Opera and the Krasnodar Musical Theatre.

Since 2011 Vladislav Karklin has been a regular guest conductor at the Mariinsky Theatre where he has conducted performances of Ruslan and Lyudmila, The Tale of Tsar Saltan, Eugene Onegin, The Maid of Pskov, Aida, Nabucco, I pagliacci, Il viaggio a Reims, A Midsummer Night’s Dream, La Bohème, A Christmas Tale, L’elisir d’amore, Prince Igor, Macbeth, Rigoletto, Dead Souls, The Lefthander, Romeo and Juliet, Apollo, Symphony in C, Carmen Suite, The Fountain of Bakhchisarai and Le Corsaire. Vladislav Karklin conducted the premieres of the ballets The Bronze Horseman and The Stone Flower as well as of the concert performances of the operas La Cenerentola, Quiet Flows the Don, L’italiana in Algeri and Dubrovsky.

Since January 2016 Vladislav Karklin has been Principal Guest Conductor of the Primorsky Stage of the Mariinsky Theatre in Vladivostok where he has conducted performances of Carmen, Tosca, La traviata, The Love for Three Oranges, The Sleeping Beauty, Giselle, Serenade, The Nutcracker, Swan Lake.
Since September 2017 – Artistic Director of the Krasnodar Music Theatre.