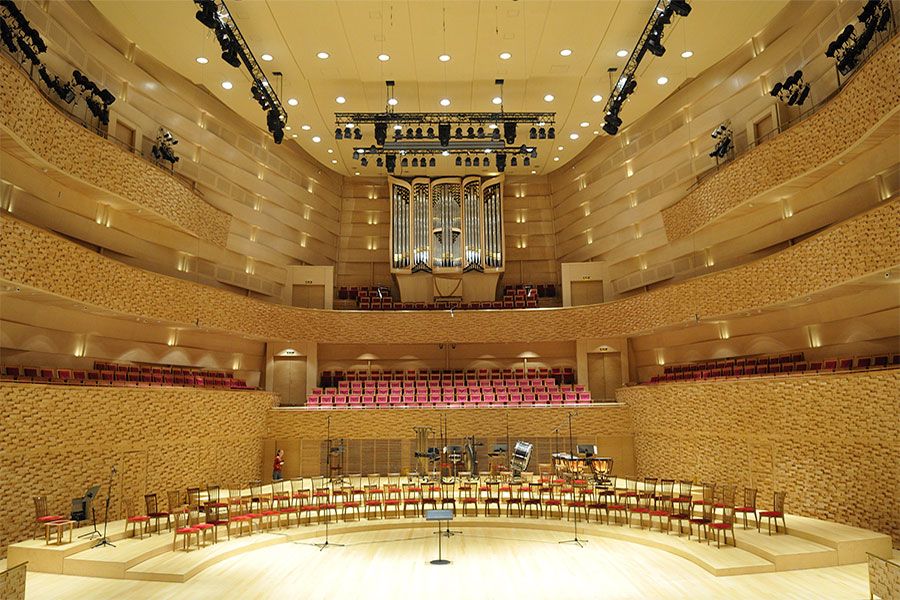 Musicians of the Mariinsky Orchestra

Wind quintets first appeared in the very late 18th century. Their predecessors were ensembles of “harmonic music” consisting of oboes, clarinets that satisfied the ears of music-lovers in the era of classicism. In the 1780s Mozart came to the wind quintet genre in earnest, composing two serenades for “harmonic music” and a quintet for piano, oboe, clarinet, French horn and bassoon. The Fantasia in F Minor was written by Mozart following a commission from Count Joseph Deym von Strzitez who was living incognito in Vienna under the name of Joseph Müller and had a gallery of wax figures. Its crowning glory was a clock in the form of the mausoleum over the grave of Field-Marshal von Laudon. The clock contained a hidden mechanical organ that performed funereal music. Mozart’s music was too good for a musical automaton, and it soon began to be performed by organists, piano duos, other ensembles and even orchestras. Mozart’s pupil Ignaz Ritter von Seyfried recalled that “A thousand different sensations are roused... by the frighteningly wild Allegro with its expertly developed fugue. With the stunning deviation into F Sharp Minor audiences were gripped, and it seemed that the ground was quaking beneath them. Heavenly singing can be heard in the kind and exceptionally gentle Andante in A Flat Major, which draws tears of nostalgia for a celestial world.”

In the early 19th century the repertoires of wind quintets was already expansive. The latter half of the century brought them masterpieces including works by a contemporary of Tchaikovsky – the French flautist, conductor and composer Paul Taffanel (1876). It can only be lamented that the composer of – arguably – the finest romantic quintet for winds wrote little, generally restricting himself to arrangements of the music of others.

The “golden age” of jazz ensembles began in the 1920. Fearing to lapse into sentimentality or fall into the category of pale imitators of romanticism, composers abandoned string instruments and gave their preference to wind instruments, while post-war economic conditions resulted in smaller ensembles. In 1922 Danish composer Carl Nielsen wrote his Quintet Op. 43 – one of the largest, well-developed and deep works for a wind ensemble. The stylisation in the spirit of classicism (the minuet) is paired in the work with 20th century techniques. In the finale, among the eleven variations on a theme of a religious song by Nielsen himself, there are solos exclusively for the clarinet, bassoon and French horn. The work is dedicated to the Copenhagen Wind Quintet.

One year later for the Bläser-Kammermusikvereinigung Frankfurt Paul Hindemith composed Kleine Kammermusik Op. 24 No 2. In the title, the composer stressed the applied nature of the work and held to the “business-like” style in his remarks (for example, the fourth movement, a series of very free solos, comes with the indication “quick fourths”). But behind the apparent efficiency it is impossible not to pertain the beauty of the energetic first movement or the gentle waltz in which the piccolo flute takes the place of the large flute.

An exemplary workaholic, Darius Milhaud wrote two wind quintets (Op. 299 and Op. 443), as well as an arrangement for winds of Four Sketches, Op. 227. Most popular of all, however, is his suite La Cheminée du Roi René, Op. 205 (1939). The suite comprises music for Raymond Bernard’s film Cavalcade d'amour about King René I of Provence. Milhaud composed enchanting “medieval” pieces – naive, without any shadow of emotion, without any trace of a composer’s ego. At the centre of the suite he included a saraband with the mysterious title La maousinglade, which – possibly – comes from the French maous (robust, wonderful).

Summer Music Op. 31 (1955) is the only work for wind quintet by American composer Samuel Barber. It was commissioned by the Chamber Music Society in Detroit when the composer was working on his masterpiece, the opera Vanessa. Some of the music Barber borrowed from the unperformed orchestral work Horizon and other earlier works, but in the event he created an integral one-movement composition in the style of a fantasia. The piece has been a great success since its very first performance.
Anna Bulycheva