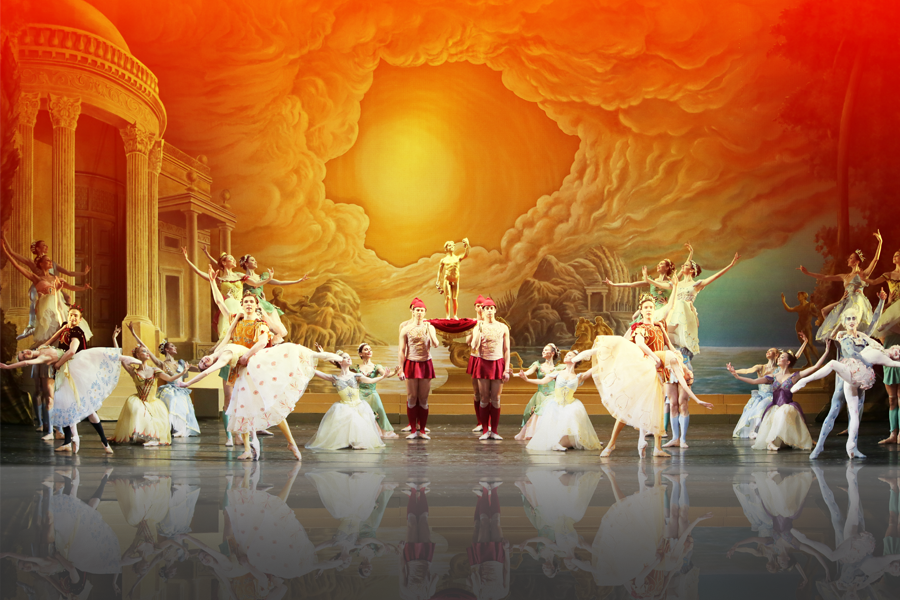 ballet by Léo Delibes
First performance of the nineteenth subscription

Act I
A sacred wood
Woodland creatures dance in the moonlight before the shrine of Eros, the god of Love. They are interrupted by the arrival of the shepherd Aminta, who is in love with Sylvia. Hearing Sylvia and her attendants approaching, Aminta hides and watches them dance as they celebrate the success of their hunt. Sylvia, who as one of Diana’s nymphs has promised to renounce love, taunts the statue of Eros. Meanwhile Orion, the evil hunter, has also been secretly watching Sylvia and, inflamed by her beauty, is determined to possess her.
Aminta’s cloak is discovered and the shepherd is dragged from his hiding place. He declares his love for Sylvia, but she is outraged and, blaming the mischievous Eros, draws her bow at the god. Aminta, shielding the statue, is pierced to the heart by Sylvia’s arrow. Eros retaliates by shooting Sylvia. Shaken, she removes the arrow from her heart and leaves with her companions.
Peasants, on their way to the fields, dance in honour of Eros. As they leave, Orion enters and gloats over the body of Aminta. He is interrupted by the return of Sylvia who, having been pierced to the heart by Eros’ arrow, now mourns the dead Aminta. Emerging from his hiding place, Orion captures Sylvia and carries her off to his island cave.
A peasant, having witnessed Sylvia’s abduction, calls his friends back and they too weep over Aminta’s body. A strange cloaked figure appears among them, and they ask for his help. He picks a flower from a nearby bush and, pressing the petals to Aminta’s lips, brings him back to life. Aminta thanks the stranger who then tells him of Sylvia’s abduction. As the peasants find her bow the stranger reveals himself as Eros and sends Aminta in search of Sylvia.

Act II
Orion’s island cave
Orion tries in vain to gain Sylvia’s affections by tempting her with jewels and fine clothes. She is reminded of her love for Aminta by Eros’ arrow, but as she attempts to escape, Orion takes it from her. He offers her wine. In order to evade his advances, she encourages him to drink and dances for him until he falls senseless. She retrieves the arrow and prays to Eros for help. The god appears, shows Sylvia a vision of Aminta waiting for her by Diana’s temple, then takes her to be reunited with him.

Act III
The sea coast near the temple of Diana
A festival in honour of the god Bacchus is interrupted by the arrival of Aminta in search of Sylvia. He hopes to find her in Diana’s temple but is met by closed doors. He sees a boat approaching with Eros, Sylvia and her attendants on board, and Eros reunites the lovers.
The general rejoicing is interrupted by Orion, determined to recapture Sylvia. She takes refuge in the temple and, after a fight with Aminta, Orion tries to break in. Enraged by the intrusion, Diana appears and kills him. Her anger is now directed at the lovers and she forbids their union. Eros reminds Diana that she herself was once infatuated with a simple shepherd, Endymion. She relents and gives the lovers her blessing.

Ashton found the key to unlock Delibes’ magical music. He created an airy, impetuous, light and ironic ballet in which the element of dance reigns supreme, present in precise yet watercolour, weightless forms.
Ashton’s entire ballet is filled with the very nature of dance. Its most important quality is its dynamism. By the middle of the century world ballet had already adopted the experience of Balanchine’s modern classicism – and Ashton immersed the naive old plot into tempestuous series of dance that gave structure to the space, answered the spirit of the music and filled the whole with lively and intense energy.
The ballet is structured as a series of dazzling ensembles into which the plot is woven with great wit. The ethereal ensemble of the dryads in long ballet tunics and the fauns who catch them with garlands of flowers, the dynamic ensemble of hunters in short tunics, army helmets and bows, the ensemble of villagers with rakes and wheelbarrows, each succeeding the last. And the story of how Aminta falls in love with Sylvia the huntress-nymph, how he is injured and revived by Eros who adopts the guise of a sorcerer, how Sylvia is abducted by the evil Orion and how she laughs at him and confuses him, is also totally suitable for dance and unfolds without reducing the generally flying pace. These plot scenes are full of refinement and wonderful choreographic humour – humour not just in the character’s behaviour, but also in how typical ballet movements are used and how the music is interpreted.
Sylvia is also a hymn to lightness. Even the terrifying Eros disguised as the old sorcerer in his hood and wide-brimmed hat, moving with a particular and light step – at one and the same time dancing and cat-like – resembles a commedia dell’arte performer. And the conflict of the two rivals – Aminta and Orion – which so resembles the conflict between Jean de Brienne and Abderakhman in the famous Raymonda is also resolved through lightness; the tender Aminta emerges victorious from all the peripeteia while the “masculine” Orion is shamed.
The image of Sylvia combines heroism (the bellicose dances of the hunters) and piquancy (the scene of Orion’s seduction), and elegance with dance passion (a variation to the music of the famous pizzicato).
Inna Sklyarevskaya

The Mariinsky Theatre would like to express its gratitude to Mr Toshihiko Takahashi for his constant support of its ballet projects.