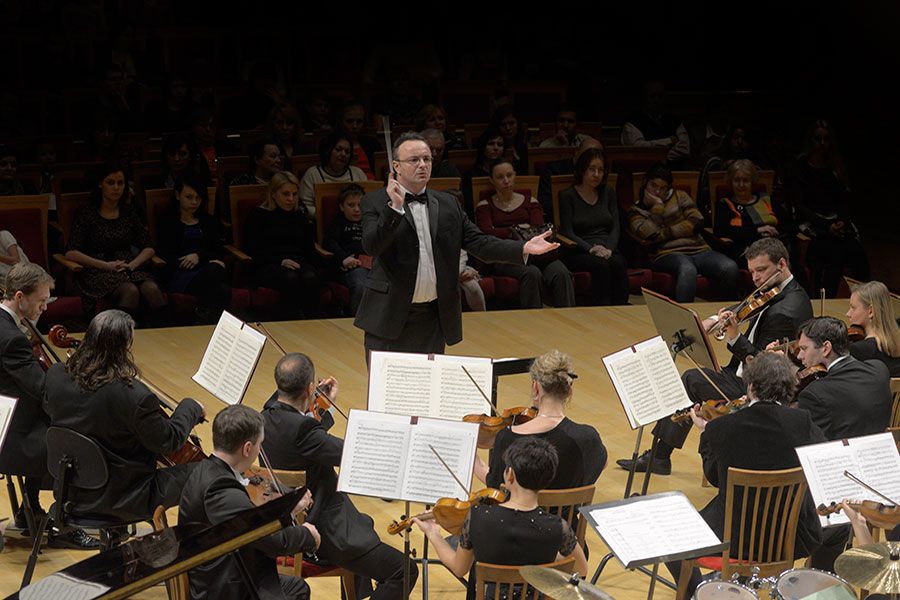 First concert of the fortieth subscription

On 5 April 1778 in Paris Mozart began to compose his Sinfonia Concertante for Four Winds and Orchestra. It was to be performed as part of the so-called Concerts spirituels being held in Paris. It was imagined that the soloists would be musicians of the famed Mannheim Orchestra – flautist Johann Baptist Wendling, oboist Friedrich Ramm and bassoonist Georg Wenzel Ritter as well as French horn-player Giovanni Punto (possibly, as work progressed, Mozart decided to replace the flute with the clarinet, favouring some French clarinettist). The musicians literally fell in love with the new opus, though for some reason the director of the Concerts spirituels Joseph Legros hid the symphony amid a large heap of sheet music and it was not performed. Legros purchased the symphony from Mozart.
Since then no-one has seen either the scores of the Sinfonia Concertante or the spiritual concerti that Mozart composed for Legros. Mozart intended to write out the symphony again from memory for himself. Whether he did so or not is unknown. In the very late 1860s the German researcher Otto Jahn discovered a copy of the score of the symphony which features the clarinet rather than the flute. Ever since, Mozart historians have argued if it is the symphony in question and whether it was written by Mozart. The music, nevertheless, is very typical of Mozart and, despite the tremendous difficulties it poses for soloists, musicians love it.
Anna Bulycheva

When he approached the sketches of Eroica (1803-1804), Beethoven admitted: “I am not fully content with my own previous works, from now on I want to choose a new path.” “Starting with Beethoven there is no new music that does not have an internal programme,” as Gustav Mahler noted one century later.
Starting with the Eroica symphony, it became possible to speak of symphonism: today this term is used not just for orchestral works, even going far beyond the confines of music itself. Symphonism encompasses the dialectics of the development of artistic images, their battle as they develop and the confirmation of the central idea of the work. Of course, Beethoven, in his own words, was “standing on the shoulders of giants”, and symphonism as an artistic method had evolved over many centuries in European culture.
A confirmed republican, the composer intended to dedicate his symphony to Napoleon. One of Beethoven’s favourite pupils, the pianist and composer Ferdinand Ries recalled: “This symphony was conceived in connection with Bonaparte when he was still the first consul. Beethoven had an extremely high opinion of him and compared him with the finest consuls of Rome. I and other close friends of his often saw this symphony among the scores on his desk; at the top of the title sheet the word ‘Buonaparte’ and down below ‘Luigi van Beethoven’ and not another word more... I was the first to bring him the news that Bonaparte had crowned himself Emperor. Beethoven was furious and cried out ‘He, too, is an average little man! Now he will trample every right of man underfoot, he will pursue only his own ambition; he will place himself higher than others and turn himself into a tyrant!’ Beethoven came to the table, seized the title sheet, tore it demonstratively in two and threw it onto the floor.” The new title sheet of the symphony read Eroica.
Everything was new in Beethoven’s latest symphony. The “new” came with the “eagle allegro” (Alexander Serov) with its gigantic scale, the variety of musical themes, the impressive size of the development, the majesty of the main idea... New, too, was the funereal march with its developed programme and symphonic scene that took the place of the traditional Adagio. In a new way, the whirlwind of an impetuous, heroic scherzo seizes us, definitively throwing off the chains and fetters of minuet etiquette. And, lastly, totally “new” were the finale’s variations on the Eroica theme: here Beethoven teaches a lesson to future generations, showing “from what waste there grow” great musical ideas. Beethoven’s dance motif of contredanse composed ten years earlier (1795) for the artists’ annual ball was used by the composer as the basis for the final part of the ballet Die Geschöpfe des Prometheus (1801).
In the finale of the symphony, Beethoven subjects the theme to a series of brilliant transformations, “growing” the majestic and heroic apotheosis from social dance.
Iosif Raiskin

The Mariinsky Youth Philharmonic was founded in 1999 on the initiative of Valery Gergiev with the aim of training the next generation of theatre musicians and perfecting their performing skills. From that day to this, the orchestra has seen a constant flow of new young musicians. Since its inception, the orchestra has been conducted by such maestri as Gianandrea Noseda, Algirdas Paulavičius and Valery Gergiev himself, thus ensuring the continuity of traditions and involving young performers in the established routine of theatre life. The orchestra has also been conducted by Vladimir Feltsman, François Xavier-Roth, Kazuhiko Komatsu, Daniel Smith and young conductors from Russia, the USA, Greece and China who trained under Ilya Musin. The orchestra made its first independent appearance in 1999 at the Stars of the White Nights festival when it featured in a performance of the opera Le nozze di Figaro. That same year saw the Youth Philharmonic Orchestra undertake its first tour to cities in Italy. The ensemble went on to perform in Finland, Germany and Japan.
Thanks to the opening of the Mariinsky II the orchestra now has increased opportunities to present the public with its own unique programmes.