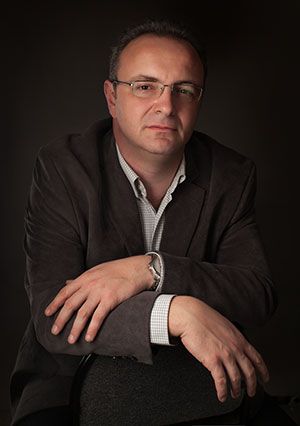 In 1993 he attended master-classes conducted by Peter Bruns and Jan Vogler at the Musikhochschule in Dresden. From 1994–1998 he was a performer with the Mariinsky Orchestra with which he toured to Europe, the USA, Israel, South Korea and Japan.

Recipient of the 1st prize at the International Chamber Music Competition in Pozoblanco (2003). In 2009–2010 he trained at the St Petersburg Conservatoire under Vasily Sinaisky. Since 2011 he has led the Alicante Youth Orchestra. In August 2012 he appeared with that ensemble at the Schleswig-Holstein Music Festival in Germany.

Since 2008 he has been a soloist with the European Royal Ensemble (Madrid), with which he made his debut as a conductor in 2012.

Since 2015 he has performed at the Great Hall of the St Petersburg Philharmonic with the Singolo Orchestra. He also performs with the Orquesta Clásica Santa Cecilia at the Auditorio Nacional de Música in Madrid, the New Russia Moscow State Orchestra at the Tchaikovsky Concert Hall in Moscow, the St Petersburg State Symphony Orchestra, the State Chamber Orchestra of the Republic of Belarus and the Mariinsky Orchestra, including Mariinsky 2018 China Tour.

In 2017–2018 he assisted Valery Gergiev during the collaborative performances of Dmitry Shostakovich’s Fourth and Seventh symphonies by the Mariinsky Orchestra with Barcelona Symphony and Catalonia National Orchestra (2017), la Orquesta de València and San Diego Symphony (2018). In September 2017 he conducted the premiere of Mozart’s opera Der Schauspieldirektor at the Mariinsky Theatre.

He performs a cello crafted by Jean-Baptiste Vuillaume, on generous loan from the board of the Mariinsky Theatre.