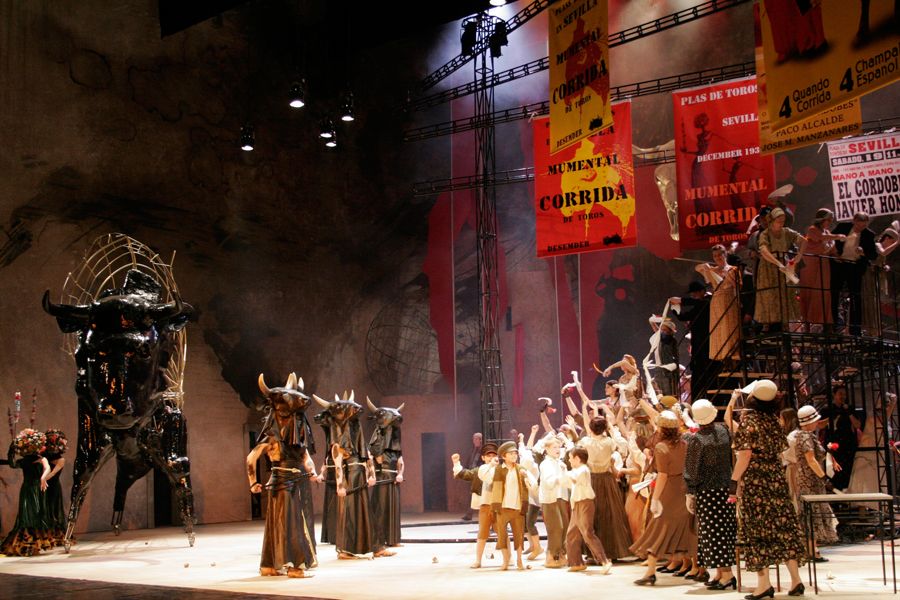 Act I
A square in Seville
In the guard house, Moralès and his soldiers are discussing the passers-by. Micaëla arrives, looking for the corporal Don José. Moralès explains that José is in another company that is due to take over the guard. Micaëla decides not to wait and departs. The officer Zuniga and José lead in the new guard, accompanied by a horde of children. Moralès tells José that Micaëla was asking for him. Zuniga, leader of the new guard, asks José about the women who work in the factory nearby, but José says he pays them no attention.
It is break-time at the factory and the women come out to smoke and flirt with the young men who have been waiting for them. Carmen is at the centre of everyone’s attention. She talks of love (L’amour est un oiseau rebelle), that it is elusive and inconstant and that she will only love a man she herself chooses even if he does not love her in return. The bell rings, signalling the break is over. Carmen, desirous of catching José’s attention, throws him a flower.
Enraptured, he quickly hides it.
Micaëla returns, bringing José a letter from his mother in which she asks him to return to marry Micaëla.
Uproar suddenly breaks out in the factory and the women pour into the square, accusing Carmen of drawing a knife on her friend in a quarrel. José is sent to question Carmen, but she refuses to answer. Zuniga orders José to take her to prison. Carmen starts to captivate José and tries to persuade him to release her. Forbidden to speak, she sings, contriving to arrange a rendezvous with him at Lillas Pastia’s tavern. He agrees to free her only if she will love him. She promises to do so, José frees her and is subsequently himself arrested.

Act II
Lillas Pastia’s tavern
Carmen, Frasquita and Mercédès are entertaining gypsies and soldiers. Zuniga tells Carmen that José, demoted and jailed for a month for aiding her escape, has just been released. A crowd is heard outside acclaiming the victorious toreador Escamillo, who enters followed by a throng of admirers. He returns Zuniga’s toast, drinking to his health, and describes the exhilaration of fighting a bull. Carmen immediately captures his attention but she shows no interest. Everyone leaves.
The smugglers Remendado and Dancaïro arrive; they are about to depart and ask Carmen, Frasquita and Mercédès to help them carry their wares. Carmen refuses: she is in love and waiting for José. Mockingly, the smugglers suggest José joins their band.
Don José arrives. Carmen dances for him. When a signal is heard in the distance, summoning him back to his barracks he prepares to leave. Furious, Carmen accuses him of not loving her. In response he describes his passion and how, while in prison, he treasured the flower she threw at him when they first met. As proof, Carmen insists he deserts and goes with her to the mountains. Zuniga unexpectedly appears; he has come to meet Carmen. When he sees José he orders him back to the barracks. Zuniga and José fight over Carmen. The smugglers run in and separate them; then they tie up Zuniga and Dancaïro shoots him. Having refused to obey orders, José realises he has no choice other than to join the smugglers.

Act III
In the mountains
The exhausted smugglers are examining their goods. They have stopped for a short rest. Carmen and José are there too. Carmen senses that José would be prepared to kill her if she left him.
Frasquita and Mercédès read their fortunes with cards. They see a prosperous future. Carmen joins them. But however much she shuffles the cards, only death is foretold.
Dancaïro and Remendado return. The gypsy women leave, having been instructed to distract the customs officers who are blocking the smugglers’ path. José is left to guard the contraband goods.
Having overcome her fear, Micaëla arrives. She is looking for José. A shot frightens her and she hides. It was José firing at an intruder – Escamillo. The toreador explains that he is pursuing Carmen, having heard that she no longer loves her soldier. The enraged José reveals himself and the rivals start to fight. Carmen stops them. Escamillo thanks her and invites everyone to his next bullfight in Seville and leaves. Crazed with jealousy, José threatens Carmen.
The smugglers find Micaëla in her hiding place. She has come to beg José to return to his mother. Carmen urges him to go. Micaëla then reveals that José’s mother is dying and wants to forgive him. He agrees to accompany Micaëla. Escamillo can be heard in the distance.

Act IV
Outside a bull-ring in Seville
A crowd has gathered outside the bull-ring prior to the bullfight. As they arrive, the participants of the corrida receive a rapturous reception. Escamillo appears, with Carmen in his wake. Frasquita and Mercédès warn Carmen that José is following her, hidden in the crowd.
However, she decides to wait and talk to him. All depart to watch the bullfight. José appears and pleads with her to return to him. She remains unyielding. She showers him with insults, provoking him. The crowd ecstatically greets Escamillo. Her rapture over the toreador makes Carmen betray her new love. She throws the ring José gave her in his face and heads towards the arena. Mad from suffering and humiliation he plunges a dagger into her.
The crowd rejoice at the toreador’s victory.