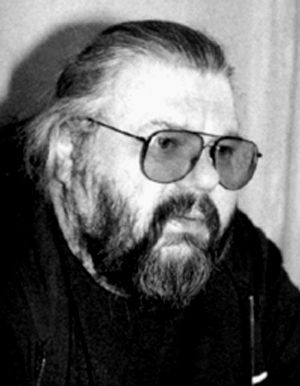 • Recipient of the State Prize of Russia
• Honoured Artist of Russia

Since 1985 has been Principal Designer of the Novosibirsk State Academic Theatre of Opera and Ballet. Prior to Novosibirsk, he worked as Principal Designer for the Chelyabinsk State Theatre of Opera and Ballet, the Komi State Musical Theatre and theatres in Moscow, Oryol, Krasnodar, Kazan, Ufa, Yerevan and Alma-Ata. He has been invited to stage works in Japan and Egypt numerous times.

Has created the sets and costumes for over one hundred productions in various genres including opera, ballet, drama, operetta and gala concerts. He mostly works on operas and ballets, throughout Russia and abroad.
Among works he has designed for the Novosibirsk Academic Theatre of Opera and Ballet are Hot Snow, Les Contes d´Hoffmann, Il barbiere di Siviglia, Prince Igor, La traviata, La bohème , Young David, Rusalka, La voix humaine, The Tsar´s Bride, Carmen, Rigoletto, Peer Gynt, Coppélia, Stepan Razin, Swan Lake, The Sleeping Beauty, The Nutcracker, The Marriage of Balzaminov and Bournonville´s Conservatoire, or Caprices of a Ballet-master.

In addition to work for theatre, Igor Grinevich also does painting and graphics, and has taken part in exhibitions in Moscow and Germany. Many works by Igor Grinevich are in private collections both in Russia and abroad.