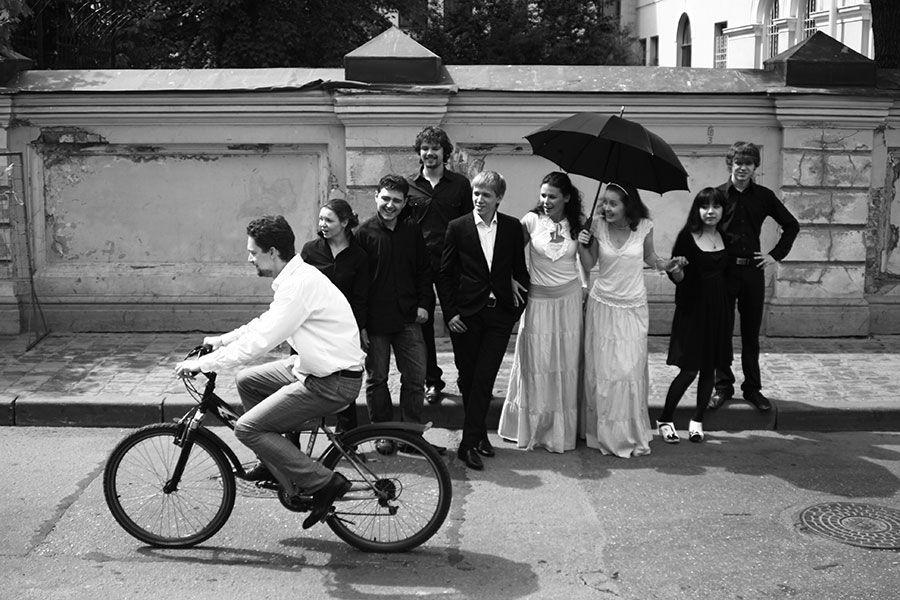 Sound was created by God

The Russian Conservatoire chamber cappella is a Moscow ensemble that has won a reputation for reviving undeservedly forgotten masterpieces of 20th century Russian music and European baroque music unknown in Russia. Historical veracity combined with the young musicians’ passion has resulted in the music they perform always sounding contemporary yet stylistically irreproachable.
In 2008 Nikolai Khondzinsky, then still a student at the Moscow Conservatoire, was asked by Toccata Classics to produce recordings of all of Shebalin’s choral works. This endeavour received lofty praise from the critics. Rob Barnett, a columnist of British magazine MusicWeb international, wrote that “the sound of the chorus is filled with inner light, each note is given due attention as per the most pedantic professionals.” Their initial success brought the musicians closer together and soon the chorus was joined by first-class instrumentalists including musicians from Russia and abroad. Ayako Tanabe from Japan became a leader and soloist.
To date, Nikolai Khondzinsky and the Russian Conservatoire have performed dozens of concerts at the finest venues in Moscow and throughout Russia, world and Russian premieres of works by composers from the 18th to the 21st centuries, exclusive recordings and several projects including the first performance in Russia of all of Johann Sebastian Bach’s religious cantatas.
Among other significant achievements of the Russian Conservatoire are world premieres of Jan Dismas Zelenka’s Gloria (ZWV 30), Kyrie (ZWV 26), the Russian premieres of Miserere (ZWV 56), Miserere (ZWV 57) and concerti for various instruments by Zelenka, the first performance of choruses from the cycle Timeless Songs by Sviridov, the first performance of music for the ballet Autumn Motifs, the orchestral poems On the Verge of Thawing and Ice and Birds in the Rain by Yuri Abdokov, the Russian premieres of a series of religious cantatas and instrumental works by Bach, the cantatas Du aber Daniel, gehe hin and Sei getreu bis in den Tod by Telemann and numerous works by Vivaldi, Handel, Johann George Pisendel and Mozart.
The ensemble’s discography includes the first recordings of all of Shebalin’s choral cycles (Toccata Сlassics), Songs for the Front by Shostakovich (Toccata Classics) and many works by Sviridov, Abdokov and Zelenka.

The programme for the concert Sound Created by God includes masterpieces of secular and religious music by George Frederick Handel, Johann Sebastian Bach and Jan Dismas Zelenka.
In addition to famous concert opuses by Handel and Bach the programme features works that are performed incredibly rarely in Russia. These include the cantatas Alles nur nach Gottes Willen by Bach, Handel’s Armida abbandonata and opuses by his great contemporary – Zelenka. Both Handel’s cantata and Zelenka works are being performed in St Petersburg for the first time.
Zelenka’s Symphony in A Minor is exemplary in the genre. It ranks alongside the finest symphony music of the baroque era.
Also being performed for the first time in St Petersburg is Zelenka’s Miserere for soloists, chorus and orchestra. The Russian premiere of this work, performed by Khondzinsky and the Russian Conservatoire in Moscow in 2009, drew enthusiastic responses from the audience, enthralled at the boldness of the “Czech Bach’s” musical language.
For the Russian Conservatoire works by baroque composers is not akin to an “antique shop” with an interesting collection of artistic means and “historical” figures of speech – rather it is the recreation of a musical “portrait” of the universe reflecting the Creator’s omnipresence.