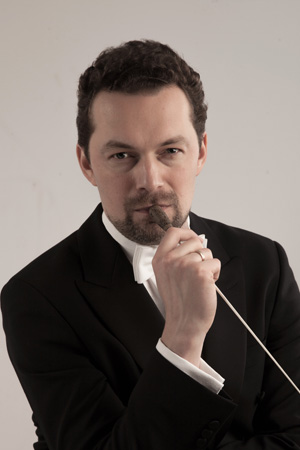 Nikolai Khondzinsky was born in Moscow in 1985. In 2011 he graduated from the Tchaikovsky Moscow State Conservatory where he studied conducting (class of Leonid Nikolayev), composition and orchestration (class of Yuri Abdokov). From 2008 to 2011 he trained under Professor Eduard Serov at the Rimsky-Korsakov St Petersburg State Conservatory.

Founder (2008), Artistic Director and conductor of the Russian Conservatory Chamber Capella. Under Nikolai Khondzinsky the ensemble has been the first to perform many works by Zelenka, Bach, Telemann and Sviridov in addition to taking part in projects of Yuri Abdokov’s International Artistic Workshop Terra Musika.

Since 2016 he has been Artistic Director of the Historical Cultural and Educational Centre Cathedral Chamber of the St Tikhon Orthodox Humanitarian University. Since 2018 he has been Artistic Director and Principal Conductor of the Pskov Philharmonic Symphony Orchestra (since December 2019 the Gubernatorial Symphony Orchestra of the Pskov Region). Nikolai Khondzinsky has conducted the first performances in Pskov of numerous works by Wagner, Mahler, Elgar, Tchaikovsky, Rachmaninoff, Prokofiev, Shostakovich, Brahms, Mozart, Haydn and Beethoven.

Nikolai Khondzinsky’s discography includes the first recordings of all of Shebalin’s choral cycles, Shostakovich’s Songs for the Front and numerous opuses by Sviridov, Abdokov and Zelenka.
Information for April 2022