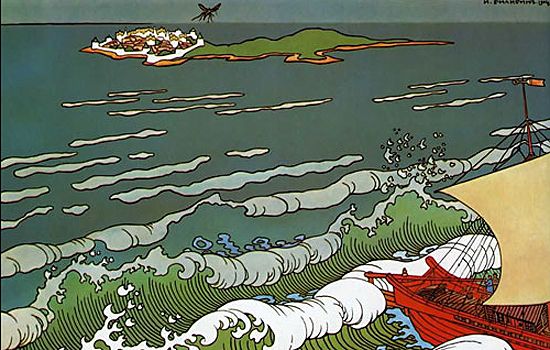 During the reign of the glorious Saltan

Alexander Sergeyevich Pushkin’s The Tale of Tsar Saltan has become one of the most popular fairytales, among adults as well as children. Written in Tsarskoe Selo during the first happy year of the poet’s life following his marriage, sixty-seven years later it inspired Nikolai Andreyevich Rimsky-Korsakov, another great storyteller, to compose the most joyful opera in the history of music.
When two geniuses create a work, then it is beyond all doubt that the work will be a masterpiece. That happened here. Filled with bright and sunny humour, lyricism, sketches and landscapes, vivid musical portraits and comic – it could even be said cartoon-like scenes, The Tale of Tsar Saltan will always delight audiences. Unsurprisingly, several numbers from the work, proving tremendously popular, took on a life of their own and can be heard not just on the operatic stage but when performed as independent pieces of music at concert halls.
Svetlana Nikitina