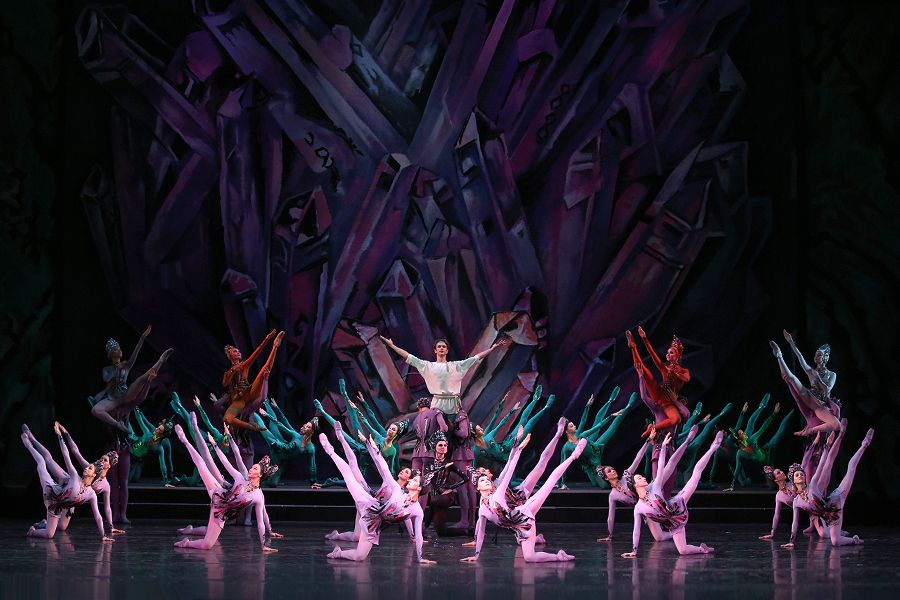 ballet by Yuri Grigorovich set to music by Sergei Prokofiev

The Ural master stone-cutter Danila dreams of creating a malachite bowl of hitherto unknown beauty and embodying in stone the delight of a living flower.

In the village Danila and Katerina's engagement is being celebrated. An uninvited guest arrives – Severian the landowner's steward: he demands the malachite bowl he has commissioned from Danila. Dissatisfied with his own work, the craftsman refuses to hand it over. Enraged at such impudence, the steward raises his lash threateningly, but Katerina stands between him and Danila. Forgetting about the bowl, Severian tries to embrace the young woman to whom he has taken a fancy.

All depart. Danila is left alone with his thoughts. From the old masters, he knows that the Mistress of the Copper Mountain possesses the secret of the stone; she is the guardian of underground treasures, and until Danila possesses the secret he will know no peace. Appearing to Danila now as a lizard, and now as a "malachite maiden", the Mistress of the Copper Mountain draws him into her realm, and the stones come alive before the craftsman's eyes: their sharp facets playing, the gems glisten and a stone flower blossoms – it is Danila's dream.

The Mistress of the Copper Mountain reveals to Danila more and more of the secrets of her realm. She has fallen in love with the talented artist and does not wish to lose him. In order to retain her guest forever, the Mistress resolves to make him her mountain craftsman.

Meanwhile, Katerina is gloomy, waiting for her betrothed who has been absent for several days. Severian makes fun of her – "neither a bride nor a wife", and tries to win her love by force. Katerina drives the steward away and resolves to seek out Danila.

Looking for her beloved, Katerina comes to a market and again meets Severian and his cohorts, wandering among the gypsies. The steward tries to take Katerina with him but the people defend her. Katerina flees and Severian is faced with a stranger who looks at him fixedly. Under her gaze Severian is unable to move his feet from the ground. Gathering all his energy, Severian breaks free and runs after the unknown woman, while she tempts him to follow her farther and farther. Only when he is on Snake Hill does Severian understand that before him stands the Mistress of the Copper Mountain. He begs for her forgiveness, but she is unyielding – Severian plunges into the earth.

Katerina's search, too, brings her to Snake Hill: her heart tells her that Danila is somewhere close by. She calls to him. The Mistress responds to the call. The girl runs to her and and begs for her intended to be restored. The girl's love, fidelity and fearlessness touch the Mistress' heart. She releases Danila. Katerina and Danila return to the people.

Running time: 2 hours 10 minutes
The performance has one interval