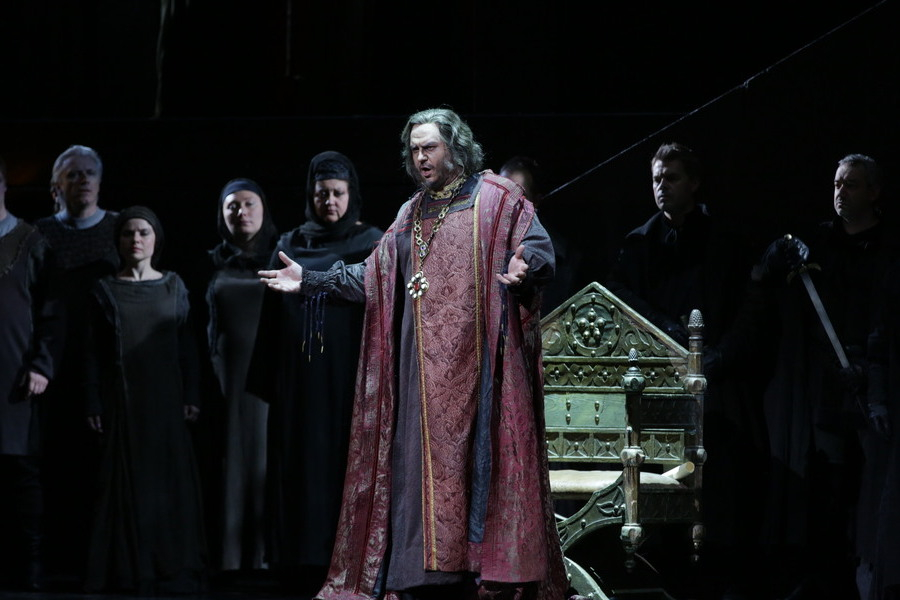 The action unfolds in Genoa and its surroundings in the 14th century.
Twenty-five years pass between the prologue and Act I.

Prologue
A square in Genoa.
Paolo and Pietro discuss who should be the first Doge of Genoa. Paolo wants it to be Simon Boccanegra, the corsair who has freed Genoa’s sea territory from African pirates.
Boccanegra is a plebeian, and his election should put an end to the power of the patricians.
Simon appears. He agrees to Paolo’s entreaties to become the Doge with reluctance: he has no need of authority, but he hopes that in becoming the Doge he can marry his beloved Maria. Her father, the patrician Jacopo Fiesco, does not approve of her marriage to a corsair and keeps his daughter under lock and key.
Paolo and Pietro convince the assembled crowd to elect Simon Boccanegra as the Doge.
Maria has died. Jacopo Fiesco accuses Simon, the father of her child, of his own daughter’s death. Off-stage the chorus laments Maria.
Boccanegra asks Fiesco for a reconciliation. Fiesco is ready to forgive Simon if the latter will surrender Fiesco’s granddaughter to him. But this is impossible: the girl disappeared recently.
Simon enters Fiesco’s palace and sees Maria dead. At the moment the crowd greets the new Doge of Genoa – Simon Boccanegra.

Act I
Under Simon Boccanegra’s rule the aristocratic Fiesco and Grimaldi families are exiled. Jacopo Fiesco has taken refuge on the Grimaldi estate under the name of Andrea. Boccanegra’s daughter Maria is also there under the name of Amelia Grimaldi; no-one knows of her true birth.
Amelia awaits her beloved, Gabriele Adorno. Amelia knows that Gabriele and Andrea are preparing a revolt against the Doge and asks Gabriele to abandon this dangerous plan. The Doge arrives at the estate; he plans to ask for Amelia’s hand on behalf of one of his retainers – Paolo. Andrea blesses the marriage of Gabriele and Amelia and tells Gabriele that Amelia Grimaldi is an orphan.
The Doge pardons the Grimaldi family and permits Amelia’s brothers to return to Genoa. In response Amelia tells the Doge about herself and admits that she has a beloved.
Boccanegra recognises her as his daughter Maria. Amelia is delighted – at last she has found her father.
Boccanegra tells Paolo that his marriage to Amelia is impossible. Paolo is unwilling to accept the Doge’s will and plans to abduct Amelia.

Scene 2
The Council Chamber in the Doge’s palace. The Doge and the council discuss affairs of State. The Tatar khan is defeated and the ships of Genoa are free to sail the Black Sea; Francesco Petrarca seeks peace in the name of Venice, but the Genoese councillors call for war.
Cries can be heard from the square – the crowd demands the Doge’s death. Boccanegra decrees that the rebels led by Gabriele Adorno be allowed into the palace.
Amelia has been abducted and Gabriele is convinced that the Doge is responsible. Amelia appears; she has escaped from her captors and confirms that the true criminal is among those present.
Boccanegra asks for Paolo’s help in finding the abductor and makes him curse the evil-doer.
Paolo is horrified – he has cursed his own self.

Act II
A room in the Doge’s palace.
Paolo is obsessed with a desire for revenge: he adds poison to a decanter lying on the Doge’s table. Pietro brings in Gabriele and Fiesco.
Paolo suggests that Fiesco kills the sleeping Doge, but he refuses to be part of such a dirty piece of work.
Paolo convinces Gabriele that Amelia has become the Doge’s lover, gives him a dagger and slips away.
Amelia appears. She tries to explain that his jealousy is misplaced, but Gabriele does not believe her. The Doge enters and Amelia hides Gabriele on the balcony Amelia tells her father that her beloved in Gabriele Adorno, the leader of the resistance. Boccanegra promises to pardon Gabriele if the latter repents. He drinks the poisoned water and falls asleep.
Gabriele wants to kill the Doge though Amelia tries to prevent him.
The Doge awakes. Realising that Amelia is Boccanegra’s daughter, Gabriele repents and switches sides in support of the Doge.
The revolt again approaches the palace. Gabriele sets out to meet them with an offer of peace.

Act III
A room in the Doge’s palace.
The rebellion is crushed. Paolo, who took part in the revolt, is led off to be executed. Before he dies he sees Fiesco and informs him that he organised Amelia’s abduction and poisoned Boccanegra.
A wedding chorus can be heard: Gabriele and Amelia are getting married.
Boccanegra is alone. He senses that soon he will die and with nostalgia recalls the freedom of the sea. Fiesco enters: he wishes to take revenge on Boccanegra and predicts his impending death.
But Simon is pleased to see Fiesco: his daughter has been found and a reconciliation is at last possible. Fiesco forgives his old enemy.
Boccanegra dies in the arms of his daughter, naming Gabriele his successor.
Fiesco hails the new Doge.


Verdi composed Simon Boccanegra at the height of his powers. By 1857 he had already written La traviata, Rigoletto and Il trovatore: each of these operas had opened up new means for operatic art and was imbued with a social pathos, which invariably led to problems with the censor. Simon Boccanegra is most similar to Verdi’s early opuses – Nabucco or Attila, in which there was to be found a response to the idea of a unified Italy, the rise in national spirit and resistance to invaders. The protagonist, it is true, neither leads any warriors nor does he resist them, instead being engaged only in internal political conflicts, though their circumstances are enough to test the strength of his human dignity.
The critics were favourably disposed to Verdi’s newest opera, something that cannot be said of the public which only came to fall in love with Simon Boccanegra in the 20th century. Possibly this was down to the somewhat confusing libretto, the unusual boldness of the musical language or that Verdi had made minimal use of the expressive techniques of the bel canto style, depriving the singers of vertiginous cadenzas and arias with striking high notes and a great variety of coloraturas and fiorituras. While observing the formal rules of operatic composition, the composer utterly changed its spirit. Boccanegra, relieved of the stronger features of bel canto, paradoxically came to resemble the operas from those times that Verdi had used these techniques with great care due to his inexperience. The male protagonist does not even have a major solo aria, this being replaced by the scene with the chorus and soloists “Plebe, patrizi, popolo!” (“Plebeians! Patricians! Inheritors!”). For an opera of the mid-19th century, this was incredibly unusual, though such a decision did in fact work in favour of the image of the doge. Like anyone endowed with power, he, though he decides the destinies of others, places his own destiny, too, at the mercy of the actions of other people. When the resulting conditions are irreparably gloomy the best thing that remains for him to do is to make the right moral choice.
Andrea De Rosa’s production was brought to the Mariinsky Theatre from Italy’s Teatro Carlo Felice (Genoa) and Teatro La Fenice (Venice). It combines historical costumes with a minimalist set design: the greater part of the stage is occupied by a constantly changing black wall, on which at times doors open, at others Venetian windows of the Renaissance appear, and sometimes it is stripped down bare to its lattice-like structure. The deliberate conditionality of the space allows nuances of the acting to be highlighted, focussing on the complex interrelationships between the characters. Throughout the entire opera, a video is projected onto the stage backdrop depicting with staggering beauty views of the Ligurian Sea, and this accompanies the plot and reacts to it with changes in the lighting employed. The surface of the water here acts as the horizon to which Simon Boccanegra is inwardly striving, and it is a symbol of the freedom and purity of his soul. Denis Velikzhanin

Simon Boccanegra
on the playbill