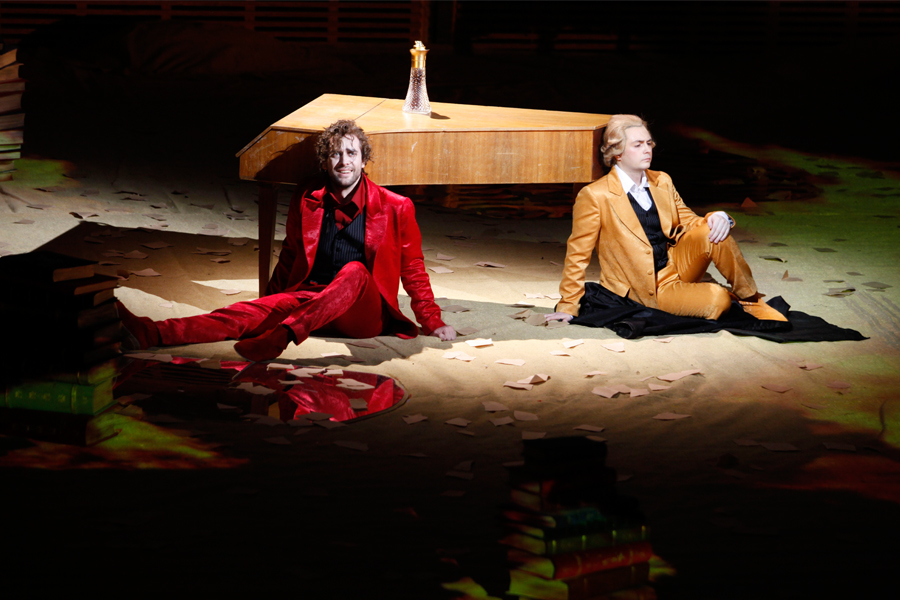 Mozart and Salieri
Kashchey the Immortal

The performances wiil have synchronised Russian and English supertitles

Vienna at the end of the 18th century
Scene 1
Salieri is deep in thought. He remembers his own convoluted path to glory and sorely envies Mozart: “Where, where is rightness? When the sacred gift, immortal genius, comes not in reward for fervent love, for total self-rejection, for work and for exertion and for prayers, but casts its light upon a madman's head, an idle loafer's brow...”
Mozart enters. He brings with him a blind fiddler, who played tunes from Mozart’s operas in an inn. The old man plays Zerlina’s aria from Don Giovanni, but does so out of tune. Mozart roars with laughter, while furious Salieri send the fiddler away.
Mozart shows his new work to his friend. Salieri is astounded by it and cannot hide his jealousy. Mozart and Salieri decide to dine together and part ways. Alone, Salieri decides that he has been chosen to stop Mozart, whose genius brings only destruction: “Like some celestial cherub, he came to bring us several tunes from heaven, to rouse within us, creatures of the dust, wingless desire and fly away thereafter. So fly away! The sooner now, the better.” He procures poison and intends to kill Mozart.

Scene 2
A room at the Golden Lion Inn. Mozart and Salieri are talking. Mozart tells his friend of a strange man in black, who came over a couple days ago – he commissioned Requiem from him and then never showed up again. He confesses that “by day and night my man in black would not leave me in peace.”
Salieri tries to soothe Mozart and suggests that he uncork a bottle of champagne, as advised by his companion Beaumarchais, or to reread Le Nozze di Figaro. Mozart asks whether it is true that Beaumarchais had poisoned someone, and hears the answer: “too laughable a fellow for such a serious craft.” He was a genius, objects Mozart, and “genius and evildoing are incompatibles.”
Salieri hesitates for a second and then eventually throws poison into Mozart’s glass. Deep in his thoughts, Mozart drinks his wine, then sits down at the piano and plays his Requiem. Rattled by this, Salieri cries. He unburdens his heart in a small arioso: “As if I had fulfilled a heavy duty, as if at last the healing knife had chopped a suffering member off.” Mozart, seeing Salieri’s tears, exclaims: “If only all so quickly felt the power of harmony!” But then he feels sick, bids his farewell, and leaves.
Salieri is alone again. Heavy doubts crawl into his soul as he is recollecting Mozart’s words of genius and evildoing being incompatible. Then what? Does it mean that he, Salieri, is no genius? “That is not true,” he cries desperately, “and Buonarotti? Or is it a legend of the dull-witted, senseless crowd – while really the Vatican's creator was no murderer?” His exclamation is left unanswered.


Premiere of this production: 26 March 2019, Concert Hall of the Mariinsky Theatre, St Petersburg