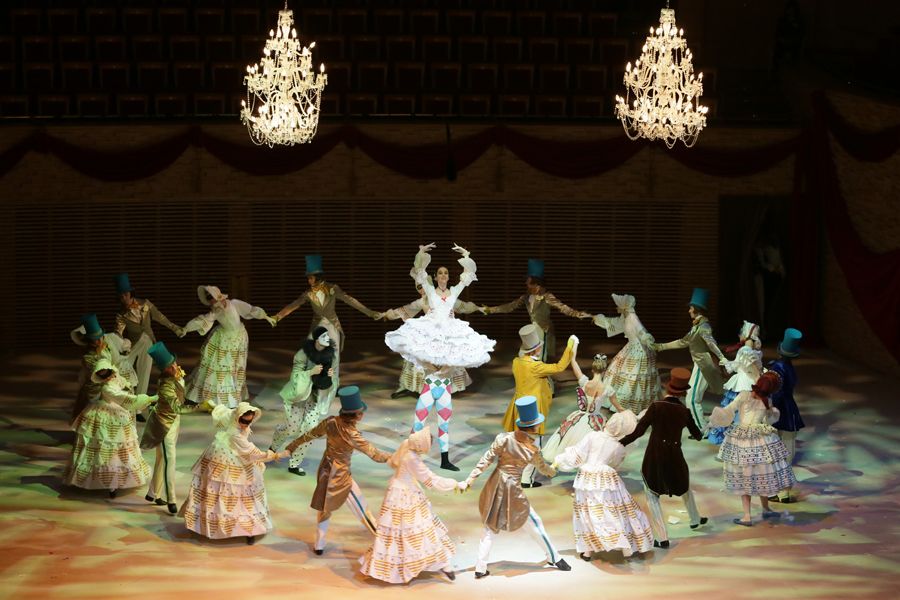 Preambule. Carnival festivities.
Pierrot. Pierrot is sad.
Harlequin. The colourfully dressed Harlequin swoops down on Pierrot. Harlequin is in good spirits; Pierrot’s wretched looks make him laugh all the more. He sneers and gibes at the poor fellow and vanishes as quickly as he appeared.
Eusebius. Eusebius enters slowly. He is perturbed by the glitter and merriment of the carnival. He is looking for refuge. At the feast there was no girl he was interested in enjoying the amusements together with. Suddenly he meets a stranger such as can only be dreamed of. It is Chiarina. She is dancing on the stage and drawing Eusebius after her.
Florestan. The passionate Florestan runs in, looking for Estrella. Voilà! Estrella feigns disdain. Florestan throws himself at her, wishing to declare his love. Continuing to act hurt, Estrella turns away, but the insistent Florestan succeeds in getting her to dance with him.
Coquette. Chiarina appears again with flowers in her arms. She dances coquettishly, giving her arm to Eusebius, she kisses a flower, throws it to Eusebius and hides.
Papillon. Pierrot is lonely. Papillon flutters past and flits about the stage lighheartedly. Pierrot lies in wait for her. Papillon flaps her wings, trying to fly away. Pierrot, intent on catching her with his hat, takes aim and throws it. Pierrot thinks he has caught Papillon, and retrieves his hat. What a disappointment! Papillon is not there – she has flown away.
Chiarina. Agitated by the events, Chiarina and two friends run in. Chiarina, apparently, has already told them about her adventure with Eusebius.
Reconaissance. The carnival characters arrive. Colombine slips as she moves across the floor; the merry Harlequin grabs hold of her. The happy couple look for the chance to withdraw and share their emotions. Their first wish, when they see no-one is looking, is to kiss.
Pantalone and Colombine. Pantalone, an old man trying to act young, enters in a terrible rush. Colombine had appointed a rendezvous. The clock shows that the time has come, and this is the place appointed in the letter... But his lady is not there. Pantalone decides to wait. In impatience he reads the letter again. Someone’s tender hands cover his eyes and someone else’s grab the letter – Harlequin and Colombine have decided to amuse themselves with the comical old devotee.
Promenade. The lovers appear, couple after couple. They plan on being alone, but they meet others also looking for a quiet spot. Papillon flies in, followed by Pierrot. Pantalone is among the strolling lovers, still trying to find the unknown writer of the letter. She leads him to Harlequin and Colombine who are wrapped in a daydream. Pantalone’s behaviour enfuriates Harlequin. At the top of his voice he declares “Columbine and I are to marry.” Pantalone protests. Pierrot calms everyone down. “No quarrels or arguments. Pantalone and Harlequin – make peace.” Harlequin holds out his hand, and Pantalone reluctantly accepts it. The burst of merriment siezes everyone. In the carnival merriment only two are ill at ease – Pierrot and Pantalone. Columbine calls on Pantalone. He moves towards her. However, Harlequin throws him into the embraces of the gaping Pierrot and attaches Pierrot’s long arms to Pantalone’s back. The last bars of the carnival music can be heard and the curtain falls. Pierrot and Pantalone, cut off from the merriments behind the curtain, knock and bang, in vain begging to be let into the carnival.

Staged in 1910 for a charitable evening, choreographer Michel Fokine and designer Léon Bakst’s Le Carnaval entered the annals of ballet history as a delightful stylisation of commedia dell'arte to music by Schumann. Fokine was inspired to create the production through his familiarity with the real-life peripeteia of the composer, finding a response in pieces from the piano cycle Le Carnaval. The duplicity of Schumann's spirit was reflected in the images of the fervent Florestan and the sentimental Eusebius, the beautiful Estrella brought to mind the composer's fascination with Ernestine von Fricken, and the coquettish Chiarina embodied his love for his future wife Clara Wieck. In Schumann's pieces there was also room for Fokine's beloved ideas of the struggle with philistines, adherents of the old traditions of art. "From all this, from the titles indicated in the sheet music – ‘Harlequin', 'Columbine', 'Pantalone', 'Pierrot' and 'Butterfly’ – I immediately saw a ballet scene,” the choreographer recalled, "It is a series of individual characteristics, mutually linked by the constant appearance of the deadbeat Pierrot, the humorous Pantalone and the always victorious-over-all Harlequin with his pranks and escapades. The brief plot surrounding the love between Harlequin and Columbine, the failures of Pierrot and Pantalone – all of this was literally improvised during rehearsals. The ballet was staged after three rehearsals..." One witness of the first performances of the ballet thus described the harmony of the characters: "A jest, a prank, in combination with the athletic power of Harlequin are reconciled in the tenderness" of his partner Columbine. In the series of enchanting scenes the charm depended on small, imperceptible and fleeting gestures, crafty smiles, coquettish flights and the "steely affectedness that conveys the age." The performers of this ballet did not have to dazzle with their technique in the complex dance passages, the main task of the dancers was to create an atmosphere of unforced play and levity. Famous dancers appeared in Le Carnaval in their day – Tamara Karsavina, Lydia Lopukhova, Leonid Leontiev and Vaslav Nijinsky. The role of Pierrot at the premiere was performed by the emergent stage director Vsevolod Meyerhold. Following the success of the ballet at its premiere, Sergei Diaghilev included it in his Saisons russes programme, in 1911 Le Carnaval was staged at the Mariinsky Theatre, and subsequently Fokine took it to theatres in Stockholm, Copenhagen, Buenos Aires, New York and numerous private theatre enterprises. In Russia, following many years of oblivion, in 1962 Konstantin Sergeyev restored Fokine's stylisation to the repertoire. And in 2008 the production took on a new life and today it delights audiences in reconstructed form after sketches by Fokine in a version by Sergei Vikharev.
Olga Makarova