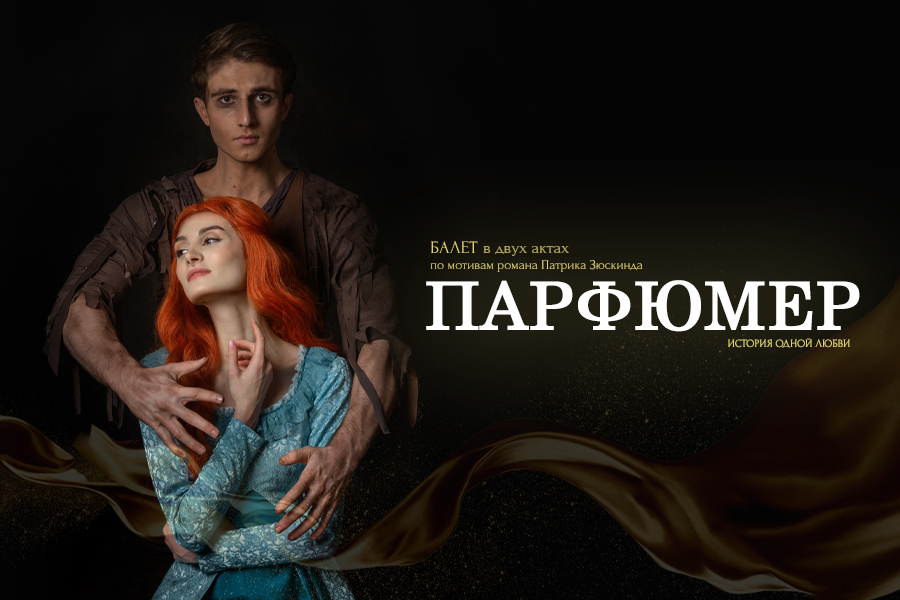 Perfume: The Story of a Love

Music by contemporary composers
Ballet in two acts based on the novel by Patrick Süskind
Director, choreographer, author of the libretto: Valery Suanov
Costume and set designer: David Naifonov

Act 1
The story takes place in France in the middle of the 18th century. We see Paris, beautiful and terrible. Architectural splendor and stinking ditches. A place where the abyss between social classes is tangible.

A man comes to the city, his origins unknown to the townspeople. His mind is clear, as if he had just been born and is eager to explore the world. For unknown reasons, he causes rejection and hostility among the townspeople. Having little choice, Jean-Baptiste Grenouille finds shelter with the tanner called Grimal, thus dooming himself to hard labour to survive. He has the gift of a very acute sense of smell, and he doesn’t divide smells into good and bad.

One day he is captivated by the smell of a red-haired girl carrying a basket of plums. The smell is so entrancing that, intending to absorb her scent, he strangles her in his arms. When she dies, the smell disappears, as well, which is a great disappointment for Grenouille. From that moment on, he becomes obsessed with the idea of creating the perfect fragrance. To achieve this, he has to murder thirteen girls, extract the smell of each of them and mix them to get the coveted fragrance to fill people’s hearts with absolute love.

In Paris there is a perfume boom, the main star is a certain Mr Pélissier with his new creation “Amor and Psyche”. The once successful perfumer Baldini is filled with envy. Picking up a handkerchief with his new-fangled fragrance in the streets, he tries to create a similar fragrance but in vain. Grenouille comes to him with leather samples provided by Grimal. Jean-Baptiste is intoxicated by the variety of smells in the laboratory, and he offers to create several fragrances. Baldini is fascinated by the young man’s talents, and swears that he will redeem Grenouille from Grimal, give him money and freedom if Jean-Baptiste reveals the recipes for all the fragrances that he created. Baldini keeps his word. He becomes popular again.

Grenouille keeps seeing the same dream where he creates his own fragrance, the crown and main chord of which is a girl’s smell he heard behind the house of the widowed consul Antoine Richis. That girl was his only fourteen-year-old daughter Laure.

One day he sneaks into their garden. He sees the father and the daughter taking a walk. He is deeply touched by their love and harmony. Grenouille picks up Laure’s doll while she unexpectedly comes back for the toy. Looking into her eyes, he falls in love with her. Now Jean-Baptiste is faced with a choice – to create the smell of his dreams or to keep her alive.

However, the endeavour has begun. On the same day he murders two twins. Grenouille starts a job in a perfume studio by Madame Arnulfi managed by her young lover, Druot. The atelier becomes Jean-Baptiste’s small laboratory where he starts to build his collection.

The city is gripped by fear. The townspeople demand that the consul catch a serial killer.

Act 2
Grenouille begins to have nightmares in which he is attacked by his victims, and each time it is Laure who saves Jean-Baptiste by shielding him with her own body. However, she cannot protect him from the fury of the relatives of the dead.

Drawn either by an unknown feeling or by a smell, Grenouille sneaks into the garden to Antoine again and sees the grown-up Laure. Feelings flare up between them. Grenouille barely fights the irresistible desire to capture her scent.

The wave of murders urges Antoine to move. Laure, seized with a love fever, is categorically against it and has a conflict with her father. But the forces are not equal, and the consul and his daughter hastily leave the city. On the way, Laure drops her handkerchief, Grenouille picks it up and follows the scent to track her. Meanwhile, Madame Arnulfi and Druot have a pompous wedding.

A few days later Grenouille finds Laure. Fearing for her life, he decides to strangle himself by covering his nose and mouth. Laure, in a swift impulse, won’t let him do it and kisses him. The kiss of her first love becomes the kiss of death for her. Grenouille’s perfect scent is created. He spends the whole night next to Laure’s body, holding her tight. At sunrise her father comes into the bedroom to wake his daughter. Seeing her and a stranger, the consul is trying to kill him, but Grenouille puts on the fragrance he created, and Antoine is already in his power. They mourn Laure together.

Grenouille hastily leaves the house. Guardsmen follow his trail and soon are able to find him. They return their captive to the city where they can hardly beat off the townspeople who are all set to lynch him. Grenouille awaits execution. In the morning he decides to test his fragrance of LOVE by throwing a scented handkerchief into the crowd which is gathered in the square. A big orgy begins. Frustrated and broken, he leaves the square. Having reached the outskirts of the city, Grenouille sees a crowd of criminals, beggars and prostitutes. In the midst of them he pours the entire bottle of his fragrance all over himself. Overwhelmed by euphoria, they circle him in a tight ring and devour him.


Premiere at the Branch of the Mariinsky Theatre in North Ossetia–Alania: 6 March 2022
Running time: 1 hours 40 minutes