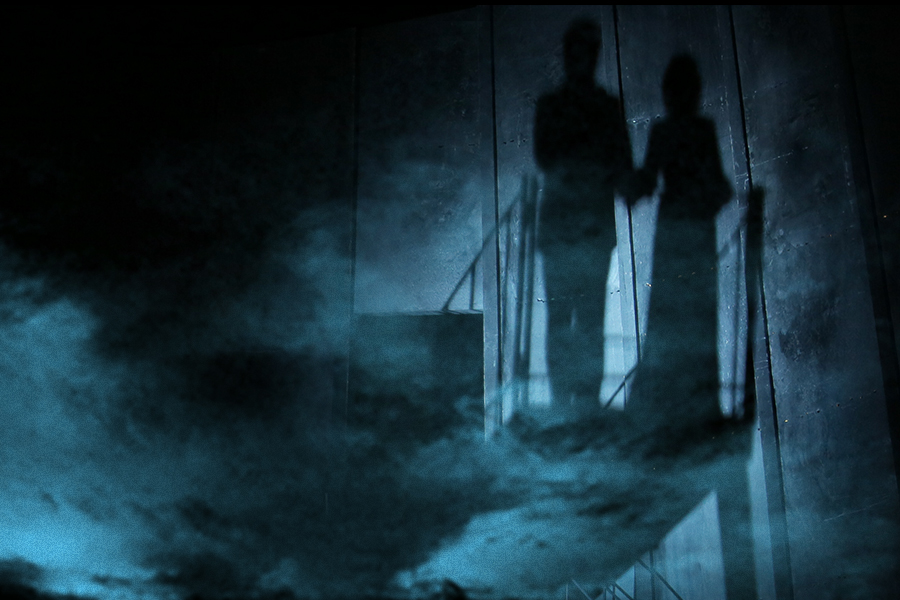 Performed in French (the performance will have synchronised Russian supertitles)

Act I
A dark forest in a faraway land. Prince Golaud, hunting a trail of blood, discovers a frightened, weeping girl sitting by a spring. Taken by her beauty and mystery, Golaud persuades her to come with him out of the forest.
The castle in Allemonde. Geneviève, the mother of Golaud, reads a letter to the aged King Arkel. In it Golaud reveals that he is now married and asks for a permission to return home with his new wife. Arkel laments Golaud’s failure to wed Princess Ursule whose union would have ended the war that cripples his nation. Pelléas, Golaud’s half-brother, enters. He has received news that his friend is on his deathbed, and wants to travel to say goodbye to him. Arkel refuses, reminding Pelléas that his presence is needed at home to care for his own dying father. The lamps are lit for Golaud’s return on top of the tower.
A garden before the castle. Geneviève shows Mélisande the castle grounds: the dark forests of Allemonde and the sea beyond. Pelléas arrives. They look out to sea and notice the ship which brought Golaud and Mélisande departing the kingdom at full speed. Geneviève asks Pelléas to escort Mélisande home.

Act II
A sunny day in the forest. Pelléas has led Mélisande to the "Blind Men's Well". People used to believe it possessed miraculous powers to cure blindness. Mélisande plays with the ring Golaud gave her, throwing it up into the air until it slips from her fingers into the well. The clock strikes twelve. Pelléas urges Mélisande to tell Golaud the truth.
A room in the castle. Golaud is with Mélisande. He is wounded, having fallen from his horse while hunting. He tells his wife that the horse suddenly bolted for no reason as the clock struck twelve. Mélisande tearfully implores Golaud to take her away from the old castle, where she is tormented by sadness and anxiety. She is unhappy as she cannot see the sky at the castle. Golaud takes Mélisande’s hands to comfort her and notices the wedding ring is missing. Mélisande claims she dropped it in a cave by the sea where she went to collect shells with little Yniold, Golaud’s son. She could not find the ring because of the rising tide. Golaud becomes furious and orders her to go and search for it at once, even though night has fallen. Golaud tells her to take Pelléas along with her.
Before a cave. Pelléas tells Mélisande she will need to describe the place to Golaud to prove she has been there. The moon comes out lighting the cave and reveals three beggars sleeping in the cave. Mélisande is terrified and runs away.

Act III
One of the towers of the castle. Mélisande is at the tower window, combing her long hair before bed. Pelléas appears on a path below the tower. He asks her to lean out so he can kiss her hand as he is going away. Mélisande leans out and her long hair tumbles down from the window on Pelléas. Pelléas playfully ties Mélisande's hair to a willow tree, so that she would not be able to go back inside. Golaud suddenly appears and dismisses Pelléas and Mélisande as nothing but a pair of children.
The vaults of the castle. Golaud leads Pelléas down to the castle vaults, which contain a stagnant pool which has "the scent of death". He tells Pelléas to lean over and smell it.
A terrace at the entrance to the castle. Pelléas is relieved to breathe fresh air again. He basks in the sunlight and enjoys the sea wind. Golaud tells Pelléas that Mélisande is now pregnant and that he must therefore keep a distance so as not to upset or worry her.
Before the castle. Golaud sits with his little son and questions him about Pelléas and Mélisande: How often does he see them together? What do they talk about? Do they quarrel? Do they close the door? Yniold reveals little that Golaud wants to know since he is too innocent to understand what he is asking. When Mélisande’s window lights up, Golaud lifts his son on his shoulders to spy on her through the window but Yniold says that Pelléas and Mélisande are doing nothing other than looking at the light in silence. Terrified of his father’s reaction, Yniold screams for Golaud to let him down again.

Act IV
A room in the castle. Pelléas tells Mélisande that his father is getting better and that now he can leave on his travels. He arranges a last meeting with Mélisande before his departure. Arkel is happy that the sickness, that faithful servant of death, has departed from the castle and now glimmers of happiness can at last come back. Golaud bursts in with blood on his forehead. When Mélisande tries to wipe the blood away, he angrily pushes her away and accuses her of being unfaithful. He seizes her by the hair and starts dragging her around the room. Arkel intervenes to put an end to the ugly scene. Golaud threatens that he will wait for a better time to prove that he is right.
In the park. Yniold tries to lift a boulder to free his ball, which is trapped between it and some rocks. He sees a flock of sheep passing nearby. Yniold asks the shepherd why the flock suddenly stopped bleating. The shepherd explains that they have turned onto a path that doesn't lead back to the sheepfold.
Pelléas waits for Mélisande at the "Blind Men's Well" late at night. When she appears, he tries to lead her away from the moonlight so that they would not be seen. However, Mélisande is not afraid. After Pelléas admits his love for her, Mélisande confesses that she loves him too. They hear the gates being shut. Now they are locked out. The lovers notice Golaud watching the couple from behind a tree. Golaud breaks their embrace and kills Pelléas. Mélisande flees for her life.

Act V
A room in the castle. Arkel, Golaud and the doctor are gathered around Mélisande’s bed as she is close to death. She awakes with no recollection of the murder or of her premature baby’s birth. Golaud is overcome with guilt, but he presses Mélisande to confess her forbidden love for Pelléas as soon as he is alone with her. Arkel enters and tries to reason with jealous Golaud. Mélisande is introduced to her baby girl. She says “I pity her” and dies. Arkel leads his family out of the room.


Running time 3 hours 15 minutes
The concert has one interval