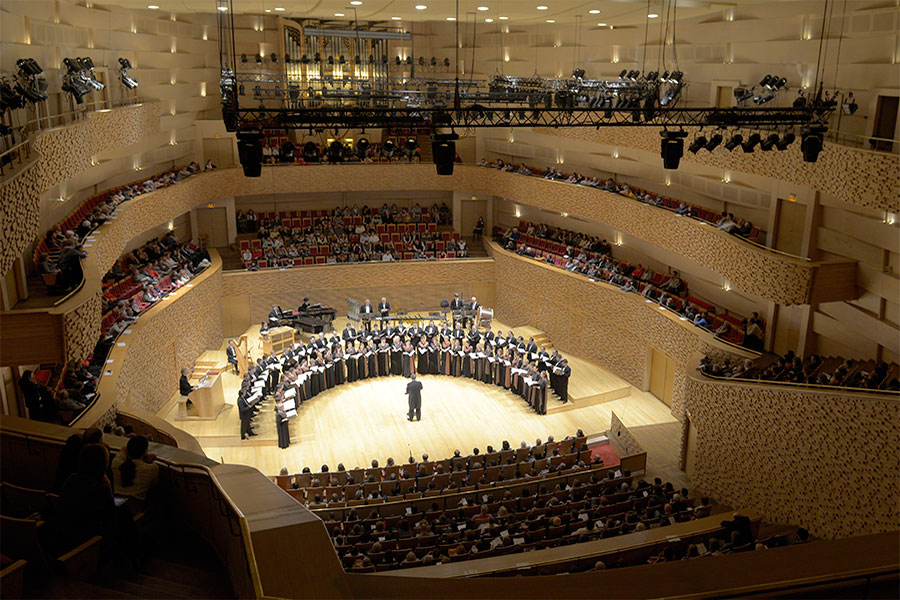 The epigraph to this wonderful work by Valery Alexandrovich Gavrilin could come in the form of his own poetic lines:
Never was a tale of more affliction
Than to live according to one’s convictions…
“As I see it,” said the composer, “the work should convey the spiritual life of the people through the fate of one man – from birth, through childhood and youth into maturity. The path to the finish is an endless road travelled by people, generation after generation, images of the road, of the path, of the river of life…”
The core of Chimes is the story of the human soul, man’s spiritual growth. From a collective pagan ritual to a man’s prayerful transfiguration. From the merry and riotous conduct of innately pagan amusements to Christian penitence. Gavrilin’s choral symphonic work presupposes elements of theatricality when being performed. It is a monumental work in which music that sings and music that plays are miraculously blended together into an inseparable whole. Gavrilin’s choral “orchestration”, full of vivid colours and witty details, stuns us with its truly genuine symphonism.
It was not by chance that Valery Gavrilin gave the most important work of his life the title Chimes. The academic Dmitry Sergeyevich Likhachev recalled an ancient Russian custom in later years: “To ring out the sin – to cast a bell so that its ringing called out to God for forgiveness. Or to cast a bell in someone’s memory.”
Iosif Raiskin