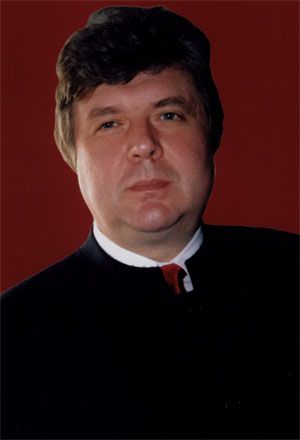 Andrei Petrenko graduated from the Leningrad State Rimsky-Korsakov Conservatoire, specialising in choral, opera and symphony conducting. Andrei Petrenko’s performing career began in 1981 as a production conductor at the Leningrad State Musical Comedy Theatre; he subsequently became the Director of the Smolny Cathedral Chorus and was a guest conductor of the Congress Orchestra of St Petersburg. From 1989 to 2000 he taught choral and symphony conducting at the St Petersburg State Rimsky-Korsakov Conservatoire, in addition to holding international master-classes with foreign students. Andrei Petrenko has toured to more than twenty countries with various choruses, ballet companies and symphony orchestras of St Petersburg. He has staged productions of operas in Finland (Gounod’s Faust in Pori) and in Estonia (Paisiello’s Il barbiere di Siviglia in Tallinn).

Since 2000 to 2020, Andrei Petrenko has been the Mariinsky Theatre’s Principal Chorus Master. Among the most outstanding productions in which he has been involved in recent years are operas such as Les Troyens, Benvenuto Cellini, Attila, Un ballo in maschera, The Nose, War and Peace, Prince Igor, Eugene Onegin, The Love for Three Oranges, A Life for the Tsar, The Golden Cockerel, Christmas Eve, La Bohème, Parsifal, Madama Butterfly, Tosca, Götterdämmerung, Der Fliegende Holländer, Jenůfa, The Gambler, Nabucco, Otello, The Enchantress, Turandot, The Brothers Karamazov, Dead Souls, Tristan und Isolde, The Mystery of the Apostle Paul, The Lefthander and A Christmas Tale among others.

At the Mariinsky Theatre he has conducted the operas Aida, La traviata, L’elisir d’amore, Don Pasquale (in concert), Samson et Dalila, Król Roger, Prince Igor, Eugene Onegin, The Snow Maiden, The Tale of Tsar Saltan, The Enchanted Wanderer, Sorochintsy Fair and War and Peace as well as the ballet Les Noces and a staged version of Verdi’s Requiem and cantata and oratorio works by Mozart, Berlioz, Gavrilin, Rachmaninoff, Kastalsky and Prokofiev. He has prepared numerous concert programmes featuring Mariinsky Opera soloists and the Mariinsky Chorus and Orchestra. Andrei Petrenko conducted the world premiere of Vladimir Martynov’s Vita Nuova at the Moscow House of Music during the IV Moscow Easter Festival.

Under the baton of Andrei Petrenko, the Mariinsky Chorus has performed a cappella programmes at prestigious concert venues throughout Russia and in Lithuania, Finland, The Netherlands, Belgium, France, Germany, Switzerland, Italy, Great Britain and Israel.
Since 2008 Andrei Petrenko has been a guest conductor of the Choeur de Radio France.
Since 2014 he has been Artistic Director of the Symphony Chorus of the Sverdlovsk Philharmonic.

Andrei Petrenko has received a written deed from President of the Russian Federation Vladimir Putin for his great contribution to the preparations for the Olympic Games in Sochi in 2014.