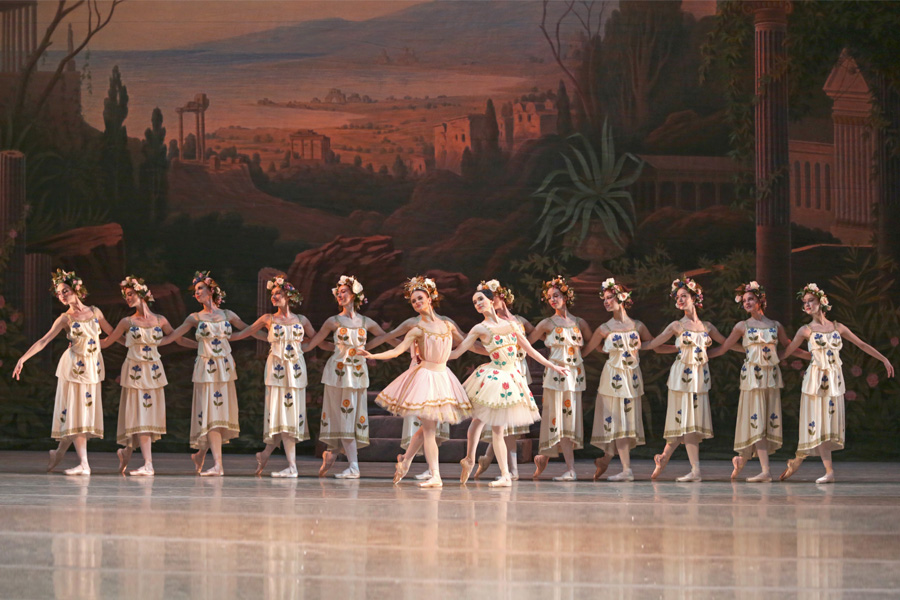 ballet by Marius Petipa set to music by Riccardo Drigo

Scene 1. Danse de Diane. Night. Flore and her nymphs are in a deep sleep; Diane, the Goddess of the Night, guards their peace. As dawn approaches there is a freshness in the air. Diane hides in the clouds.
Scene 2. Entrée d’Aquilon, Danse de la rosée. Aquilon storms over the stage; his sudden appearance awakes the sleeping maidens and makes them seek refuge among the leafage. The appearance of the cool dew brings despair to Flore and she begs Aurore to come to their assistance.
Scene 3. Arrivée d’Aurore, Valse. Aurore comforts Flore with tender caresses and declares that she will be followed by the God of the Day – Apollon, who will put an end to their sufferings.
Scene 4. Entrée d’Apollon, Zéphyr, Cupidon et les Amours, Pas d’action. As the radiant Apollon appears everything comes to life. Enchanted by the beauty of the Goddess of Flowers, he kisses her. At the summons of the God of the Day, the light and gentle breeze Zéphyr flies into the embrace of Flore, his beloved. “You must be his friend,” Apollon tells her, “That is the will of the gods.” All are delighted. Cupidon, the Amours and Nymphs rejoice at the lovers’ happiness.
Scene 5. Arrivée de Mercure, Ganymède et Hébé. Mercure, the messenger of the gods, announces the arrival of Ganymède. Flore and Zéphyr bring forth a cup of nectar and declare that Jupiter will grant them eternal youth.
Scene 6. Cortège, Grand pas. Procession. Bacchus and Ariadne’s chariot, accompanied by maenads, satyrs, fauns and sylphs.
Apotheosis. Olympia. Jupiter, Juno, Neptune, Vulcan, Minerva, Ceres, Mars, Pluto, Proserpina and Venus all appear.

Content printed after the Annual of the Imperial Theatres for 1893–1894.

The ballet Le Réveil de Flore has been made possible thanks to support from the Stiftung der Freunde des Mariinsky Theaters (Germany).