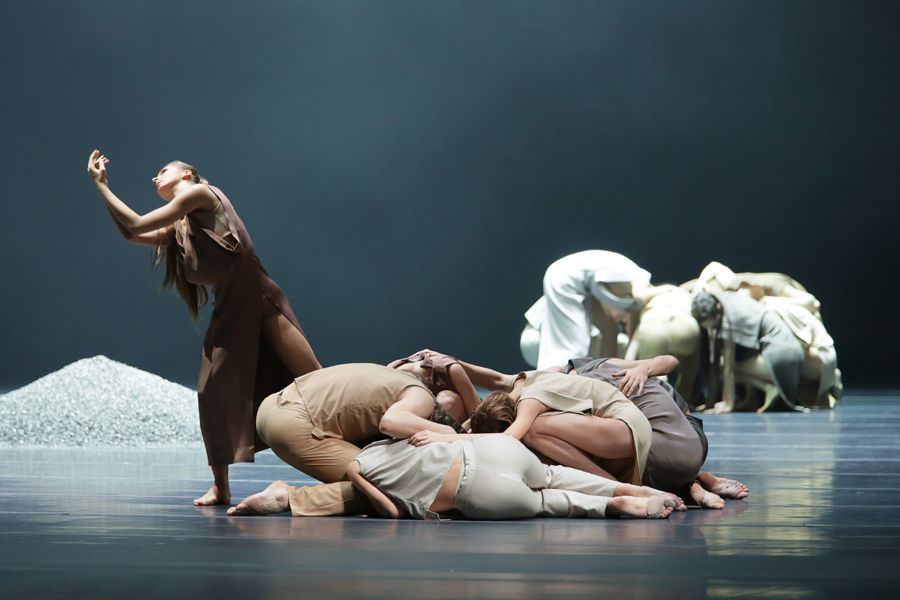 Co-production by Sasha Waltz & Guests GmbH and the Mariinsky Theatre

The history behind Le Sacre du printemps is the story of a challenge. Stravinsky’s music, which totally transformed views of composition technique and proved to be a breakthrough to new possibilities in music, was a challenge to the entire world’s professional experience. Nijinsky’s choreography with its approach to movement, its lack of correlation about the traditional ballet image of what is expressed and depicted heralded a new stage in the development of dance. The choreographer was drawn by the nature of ritual, the force of feeling the coming of spring and the terror of the insoluble and secret universe – the comprehension of the not so much externally formal components as the energetic message of the event. The rejection of the typical beauty of ballet was a challenge to refined audiences and the aestheticism of the World of Art. Since the premiere on 30 May 1913, when the audience was not ready for such a huge leap forwards, this challenge has remained an integral part of people’s ideas about Le Sacre du printemps. Each subsequent dance version of the score has been connected with the expectation of radical innovation. And the most significant of some two hundred dance versions of  Le Sacre have provided revelations. Le Sacre du printemps proved to be a driving force in dance in the 20th century.
For any choreographer of the 21st century creating their own Sacre, the importance of the great productions of their predecessors and their significance on the world scale makes citations all but inevitable. Sasha Waltz’s production also includes numerous references to masterpieces of the past. In creating her own version in the year of the work’s centenary, Waltz did not abandon the recognisable steps and leaps of the characters in Nijinsky’s ritualistic plot, seemingly so ridiculous to audiences in the early 20th century. In her Sacre one can also see recollections of Pina Bausch’s cult production – earth scattered on the stage and the striking dress in which the victim is “marked out”. Sasha Waltz, in using brief reminiscent symbols that remind us of themes touched on in earlier productions, has created her own story within the context of the ideas of those who came before her.
Her story is about human society. From the initial and serene harmony of Adam and Eve it comes to chaos and the necessity of a victim. And the mound of earth in the centre of the stage in the first scene is a kind of embodiment of nature, inherent harmony which will be trampled upon. On the other hand, this mound of earth is a reminder of the inevitability of sacrifice and death, as the sacrificial stake or the sword is slowly lowered over them during the performance – a sacrificial emblem.
Waltz does not separate any of society’s worries or aggressions. The performers in her production depict various social groups: couples, families, mankind in general. But that doesn’t bring harmony, it doesn’t stop the cruelty. The women who carry the thread of life, as if sensing the power that nature has given them, come together – here we see the motif of the battle of the sexes. Whatever society anyone may belong to resistance is inherent in human society’s forms, and independent of how society is structured there are inevitable and powerful shocks that Sasha Waltz expresses in movement: an organised mass that repeats one and the same movement in monotones, “expresses” and disperses in the chaos of individuals’ movements. The cataclysms that are experienced bring suffering to all – including children (Waltz includes some children in her narrative). In order to save and cure society a sacrifice must be made.
Waltz heard anxiety in Stravinsky’s rhythm and in her reading of the score of Le Sacre, following the cyclical nature of the music, she supercharges this anxiety with the composition and graphic position of the ensemble (the crowd is the main character in her production), the kaleidoscopic changes of distinct geometric structures against the background of the confusing chaos of worry, there is anxiety and there are nervous “sparks” in the movements. Just like Pina Bausch, the German Sasha Waltz depicts numerous accidental victims of aggression. She does not justify society. Yet her production of  Le Sacre, as with Stravinsky and as Nijinsky conceived, remains a spring of hope for revival. This is not the optimism of Béjart’s Sacre with its hymn of love and belief in the power of unity. There is a victim who dies in the finale of Waltz’ version. She is not a chance victim of nature – she is sought out and pitied. She is one of that society and turns out to be resistant to it – she is the individual facing the masses. Her final monologue is a powerful energetic explosion which brings hope with the sheer power of its temper. All of the incandescent energy built up throughout the plot bursts out in this “final word”, and its power is bewitching, bringing us – if not to catharsis – to amazement at the power Sasha Waltz has managed to recreate on the stage.
Olga Makarova


Premiere of the ballet with choreography by Sasha Waltz: 13 May 2013, Mariinsky Theatre, St Petersburg

Basically I focus on ancient rituals and the wisdom and the knowledge of wise men, as well as the history of the matriarch. I am also very interested in society’s relationship with nature. I always take a long time with any new production, the concept “hovers” around me but I never start to work until I have a very clear idea. In this production I want to speak about the relationship between society and the individual and how they interact in specific situations – such as having one person forced to sacrifice herself so that society can continue to exist. Rituals are cyclical – they celebrate the return of the cycle of nature and the universe, the stars. This is very important to me – you have, on one hand, the ritual, nature, but also the relationships within the group – the community or society – and the individual. On the one hand I wanted to emphasise the music and, on the other, I didn’t want to yield to it. The music itself is incredibly powerful, so I needed to keep my universe independent so that it can stand alone. That’s how you get a dialogue – not just following the music. In my productions everything is free – both the dance and the music. They are two very independent art forms and they should not be enslaved to each other.
Sasha Waltz

The century-long life of Stravinsky’s ballet has resulted in the polyphonic quality of the ideas it contains. But the animalistic nature, the frenzy and the passion which those who interpret Le Sacre du printemps have generally been fed is not what attracts Waltz. She looks at Stravinsky’s score with the interest and detachment of a professional biologist, and it is not just the case that you have to look at her production – you want to look at it as well, making sense of the constructions which are not always clear.

Sasha Waltz’ production even amazes to start with because of its asceticism. There is the black box of the stage without wings. In the middle there is a great heap of cinders – the dancers run and jump through it and over it, raising clouds of dust. The main conflict in Sasha Waltz’ Sacre is a group of people against an individual. There is also, of course, the theme of nature awakening – a nature that is evil and violent, aggressive and defenceless.