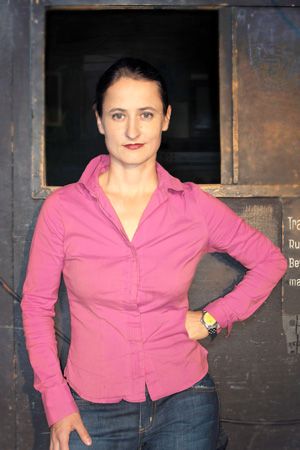 Choreographer
Sasha Waltz was born in Karlsruhe (Germany). She studied dance and choreography in Amsterdam and New York. In 1993 she co-founded her own company, Sasha Waltz & Guests, with Jochen Sandig in Berlin. In 1996 she opened the critically acclaimed Sophiensaele, a theatre she co-founded with Sandig. In 2000, Waltz was named an Artistic Director of Berlin’s Schaubühne am Lehniner Platz where she created such pieces as Körper, S and nobody as well as the choreographic installation insideout.

In 2005 Sasha Waltz & Guests once again became an independent company, with Jochen Sandig as Artistic Director. In January 2005 her first operatic choreography for Dido and Aeneas had its world premiere at the Staatsoper Unter den Linden, Berlin. In 2007 Sasha Waltz presented, among other pieces, two musical theatre choreographic works – Medea with music by Pascal Dusapin and text by Heiner Müller, which had its world premiere in Luxemburg in May as a feature of the European Capital of Culture programme, and, in October at the Opéra de Paris, Hector Berlioz’ symphonie dramatique Roméo et Juliette.

The music-based choreographic project Jagden und Formen (Zustand 2008) with music by Wolfgang Rihm and developed together with the Ensemble Modern was premiered in Frankfurt am Main in spring 2008. In March 2009 Sasha Waltz & Guests presented the project Dialoge 09 – Neues Museum at Berlin’s New Museum which was reconstructed by David Chipperfield. In 2009 Sasha Waltz received an artist’s grant at the Villa Massimo in Rome. In November 2009 Dialoge 09 – MAXXI by Sasha Waltz inaugurated Rome’s new museum for contemporary art, built by Zaha Hadid.

In 2010 her latest work, Continu, was premiered in Zurich (Switzerland), followed by her next operatic choreography, Passion (composed by Pascal Dusapin) at the Théâtre des Champs Élysées in Paris. In May 2011 the opera Matsukaze (Wind in the Pines) by Japanese composer Toshio Hosokawa with choreography by Sasha Waltz premiered at the Théâtre Royal de la Monnaie in Brussels. In January 2012 the new choreographic concert gefaltet by Sasha Waltz and Mark Andre received its world premiere at the Mozartwoche festival under the auspices of the Stiftung Mozarteum in Salzburg (Austria).

In May 2012 she was invited by the Berliner Philharmoniker to choreograph the dance project MusicTANZ – Carmen for their education programme, with over one hundred pupils performing Rodion Shchedrin’s Carmen-Suite. 2013 sees Sasha Waltz choreographing a new version of Stravinsky’s Le Sacre du printemps, a collaboration of Sasha Waltz & Guests and the Mariinsky Ballet in St Petersburg. Le Sacre will be premiered at the Mariinsky Theatre in St Petersburg in May 2013.

Sasha Waltz was awarded the Caroline-Neuber-Preis as well as the French title of Officier de l’Ordre des Arts et des Lettres in 2010. Her most recent honour was the Bundesverdienstkreuz of the Federal Republic of Germany (2011).