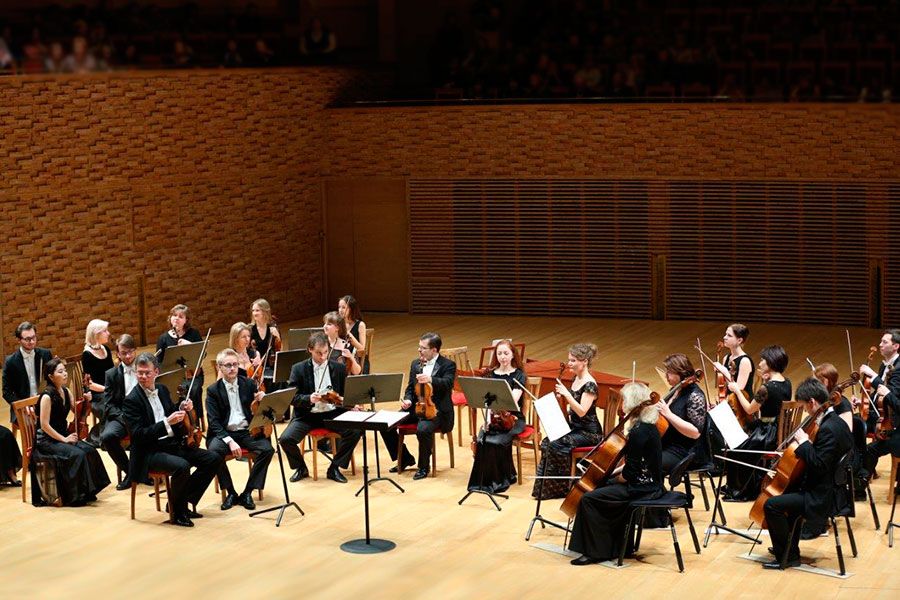 Mozart’s concerti for French horn and orchestra owe their existence to the friendship between the composer and Joseph Leutgeb. The musicians met either in 1762 or possibly 1763 in Salzburg when Mozart was still a child, or in 1773 in Milan. The Concerto No 3 (KV 447) was composed in Vienna, most probably in 1787. The score was written in one go, and, judging by the manuscript, at great speed. The presence of clarinets in this concerto makes it unique and speaks of the composer’s serious intentions. In actual fact, it is the only concerto written for Leutgeb, the manuscript of which contains no joking remarks – going against his custom Mozart did not play the fool when composing at the insistent request of his old friend. In the sheet music we can find only the name of the soloist, which the composer wrote consistently not as “Leutgeb”, but as “Leitgeb” (possibly from the German verb leiten – to conduct, to lead). There are many complexities in the concerto, but they are not insurmountable. This can be explained by comparing them with French horn concerti composed several years earlier by Antonio Rosetti (1779) – Mozart used them, in all probability, as a model. The first movement, as with Rosetti, opens with a songful theme which could actually be the secondary theme rather than the main one. The second movement unfolds as a romance, while the finale is written in a “hunting” style.
Anna Bulycheva

The Flute Concerto in G Major (KV 285с) was written by Mozart in January and February of 1778 in Mannheim. A member of staff of the Dutch East India Company, the surgeon, scientist, writer and amateur flautist Ferdinand De Jean commissioned from him an entire series of concerti and quartets for his instrument and set his payment at two hundred florins. Prior to De Jean’s departure for Paris, Mozart had succeeded in fulfilling only part of the commission and received only ninety-six florins. His father, who at the time was burdened with enormous debts, saw this as a disaster and showered his son with rebukes – the son complained of a lack of time and that he went “dense” when writing for the flute. The real reason for Mozart’s strange lack of efficiency was his serious involvement with the singer Aloysia Weber (the sister of his future wife). The Concerto in G Major was composed on a grand scale. The inspiring and triumphant tutti are interspersed with tender solos in which the flute is accompanied only by the violins, with refined episodes in minor keys. One of the real gems of the concerto is the appearance of three flutes in the  Adagio. Mozart, however, does not give the orchestral flautists the chance to compete with the solo flautist for supremacy. Here the musical hierarchy remains unchanged.
Anna Bulycheva

The Third Eroica Symphony appeared in 1804 just after the Kreutzer Sonata and the Second Symphony. Its secondary title was A Symphony in Memory of a Hero. For a short period, Beethoven’s hero was his contemporary, Napoleon I. Facets of Napoleon’s character were also expressed at various points in the 19th century in the works of Byron, Pushkin, Lermontov, David, Gros, Gйérard, Meissonier, Velle and Canova. The score of the symphony was intended to be dispatched to Napoleon via the French envoy in Vienna. However, on finding out from his student F. Riesz that Napoleon had mounted the throne, Beethoven exclaimed in disappointment “He turned out to be just like all the others! Ambition has overcome all his virtues! What a pity I am as unfamiliar with the art of war as I am familiar with the art of music, I would certainly crush him!” The composer tore up the title page of the score which featured the word “Buonaparte” and threw it into the fire. Several days later, he wrote “Sinfonia eroica”. The momentous first movement in “rounded”, triple meter, the funeral march in C minor of the symphony’s third movement and the finale in the form of virtuoso duo variations confirm the exceptional, “heroic” status of the brilliant composer’s symphony. However, transferring the classical four-part model of the way the world is perceived into the Romantic era is accomplished via the collapse of unachieved illusions of empire, thus also disappointing the new illusions of the Romantics. The funeral march as a symbol of finality would be copied several decades later by Chopin, Wagner and Mahler and, in the 20th century, by Shostakovich.
Iosif Raiskin

The Mariinsky Youth Philharmonic was founded in 1999 on the initiative of Valery Gergiev with the aim of training the next generation of theatre musicians and perfecting their performing skills. From that day to this, the orchestra has seen a constant flow of new young musicians.
Since its inception, the orchestra has been conducted by such maestri as Gianandrea Noseda, Algirdas Paulavičius and Valery Gergiev himself, thus ensuring the continuity of traditions and involving young performers in the established routine of theatre life. The orchestra has also been conducted by Vladimir Feltsman, François Xavier-Roth, Kazuhiko Komatsu, Daniel Smith and young conductors from Russia, the USA, Greece and China who trained under Ilya Musin. The orchestra made its first independent appearance in 1999 at the Stars of the White Nights festival when it featured in a performance of the opera Le nozze di Figaro. That same year saw the Youth Philharmonic Orchestra undertake its first tour to cities in Italy. The ensemble went on to perform in Finland, Germany and Japan.
Thanks to the opening of the Mariinsky II the orchestra now has increased opportunities to present the public with its own unique programmes.