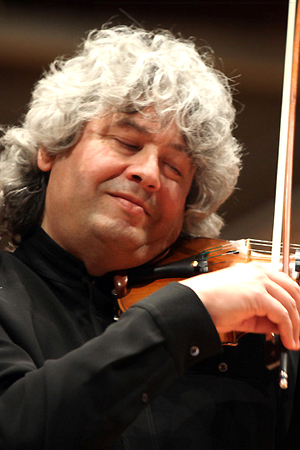 Lorenz Nasturica-Herschcowici was born in Bucharest in 1962. He completed his violin studies with Ştefan Gheorghiu in the Ciprian Porumbescu Conservatoire in Bucharest (graduated with distinction from the conservatoire in 1985); after finishing his studies he relocated with his family to Israel. Before becoming Principal Concertmaster of the Munich Philharmonic in 1992, he held the same position with the Orchestra of the Finnish National Opera in Helsinki (from 1986). He has appeared as a soloist together with such eminent conductors as Sergiu Celibidache, Christian Thielemann, Lorin Maazel, Zubin Mehta and Valery Gergiev. Both video and CD recordings of these concerts have been released.

After the death of Sergiu Celibidache in 1996 he founded the Trio Celibidache with which he has gone on numerous tours at home and abroad. In 2000 Lorenz Nasturica-Herschcowici became the first violinist in the Berlin Philharmonic Octet. He has performed as a member, leader and soloist with a large number of Berlin Philharmonic ensembles such as the Philharmonic Virtuosos of Berlin, the Sextet of the Berlin Philharmonic as well as the Deutsche Sinfonietta Berlin. In 2012 he founded the new Octet Philharmonic-Berlin-Munich-Vienna, which consists of members of these world-class European orchestras. The musicians have leader and soloist positions with the Berlin, Munich and Vienna philharmonic orchestras. From 2000 to 2017 Lorenz Nasturica-Herschcowici performed as leader and soloist with the Orquesta Sinfónica de Euskadi (San Sebastián), and from 2014 to 2017 he was a professor at Musikene (Higher School of Music of the Basque Country) in San Sebastián.

In 2011 he received a guest professorship at the Senzoku Gakuen College of Music in Tokyo. Since 2004 he has led the Munich Philharmonic Chamber Orchestra, with which he has performed a number of concerts, including with Hélène Grimaud, Anne-Sophie Mutter, Martin Stadtfeld, Vadim Repin, Nikolai Lugansky, Daniil Trifonov, Alexandre Kantorow, Nikolaj Znaider and David Fray and has been invited to make international guest appearances. In 2011 the Munich Philharmonic Chamber Orchestra went on a tour of Germany together with Martin Stadtfeld.

2013 saw Lorenz Nasturica-Herschcowici take on leadership of the Stradivarius Ensemble of the Mariinsky Theatre, where he frequently performs as a guest leader under the baton of Valery Gergiev. In December 2013 he performed the Brahms Double Concerto in St Petersburg under Valery Gergiev and in February 2014 he performed the same concerto in Munich, Madrid and Barcelona together with Daniel Müller-Schott under Lorin Maazel.

“If you have a concert-master like Lorenz Nasturica-Herschcowici, this all-embracing embodiment of a violin-devil, in playing as well as in life, you don’t need a soloist,” wrote Egbert Tholl in the Süddeutsche Zeitung in 2010. Munich’s Merkur wrote in 2014 that “Lorenz Nasturica-Herschcowici gave a splendid solo-performance filled with virtuosic elegance in the Brahms Concerto for Violin and Cello, together with Daniel Müller-Schott. The audience celebrated the concert-master for the second time when he joined his peers for the Sibelius.”