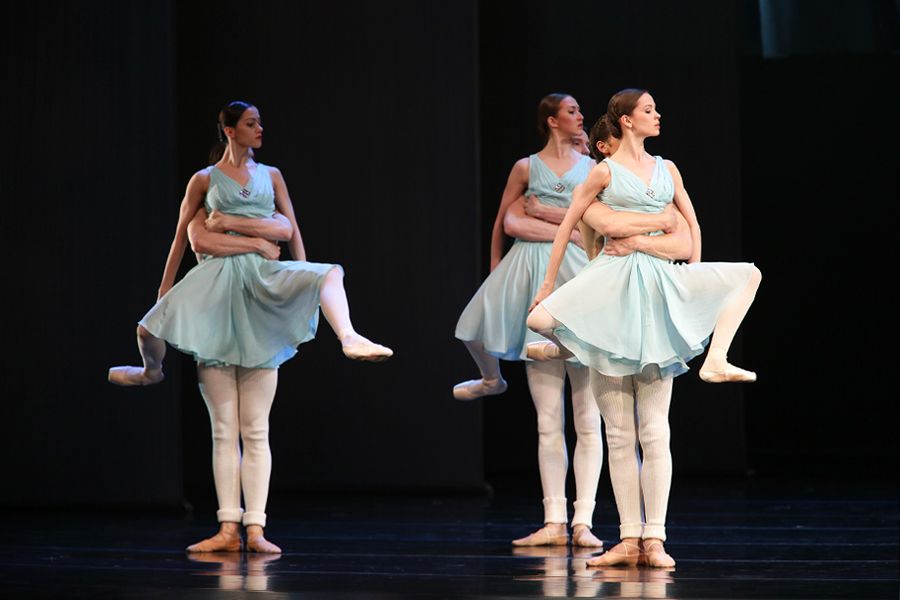 Choreographer Hans van Manen focuses on movement. Not narrating a plot, not creating dance dramas, but seeking out the beauty of lines and developing engaging exchanges between his dancers’ bodies in space.
The choreographer names George Balanchine as his idol and the primary source of his inspiration. Hans van Manen’s emergence as a creator occurred at a time when the world – having seen the kind of production created by the Russian-American in which only the music and classical dance are of importance – was absorbed by the plot-less ballet.
At that time, choreographers selected the language of dance exercises each in their own way. Some preferred traditional classicism, such as Harald Lander with Études, while others – such as Serge Lifar with Suite en blanc – attempted to expand the range of movements familiar from daily class by adding unusual poses. Yet others added to the classical lexis with elements of the techniques of modern dance. Hans van Manen is one of the latter. He had an idea of the technique of Martha Graham and tried out the freedom of mixing genres in productions by Roland Petit when he danced in his company in the late 1950s, but all these influences in his choreographic language are nothing more than the spice to the basic ingredient of classical dance. Van Manen remained a follower of classicism.
In his native Holland, he was introduced to classical dance by Sonia Gaskell who had trained under Lyubov Yegorova. It is quite obvious that it was she who encouraged the dancer and future choreographer’s admiration for the Russian school and for centuries-old traditions that provide inspiration and open the doors to creativity. In Holland there was no such powerful dance base and van Manen, looking back at the start of his path, says with a shade of regret that he had to invent the bicycle, and that freedom of combining movements that are like fundamental truths in Russia was absorbed from his very first classes when he was searching for and finding his own self.
Leningrad and the Mariinsky (then the Kirov) became a kind of ballet Mecca for van Manen. George Balanchine had come from there. He carried on the traditions. And the exceptional dazzle of talent with which Balanchine used these traditions to create something new made him an idol in the eyes of many. Including van Manen.
Van Manen never hid his desire to follow in the footsteps of Balanchine, revelling in his movements that were born from classicism. He is interested in how dancers move and what figures their bodies can form in duets and ensembles. (It is no coincidence that van Manen is also an acclaimed photographer). Unlike Balanchine, however, he does not see dance as the triumph of form. Van Manen says that his ballets are “not abstract.” Van Manen projects emotions and feelings onto the limbs of bodies in formfitting leotards, and in his productions he tells dramas about relationships between people, at the same time excluding fables and lifelikeness. In his ballets it is important for the lines that the choreographer has conceived to meet with lines of human emotions. He demands emotionality from his dancers, saying that he “wants to see people on the stage, not robots.”
Emotions come from the music. And with van Manen the range is incredibly broad – from Bach’s metaphysics to the full-bodied passions and life energy of Piazzolla and Villa-Lobos. When he works with the music, van Manen does not follow the path taken by Balanchine, a graduate of a conservatoire and for whom the professional analysis of a work and reading the score were natural requirements when staging a work. Van Manen relies on his own hearing and responsiveness to the emotional and imagistic structure of the musical material chosen.
Van Manen does not test the limits of the human body. And finding a balance with maximum speed, physical characteristics and intensity of passions is not his style. He creates movements and renders the play of geometric lines human.
Olga Makarova