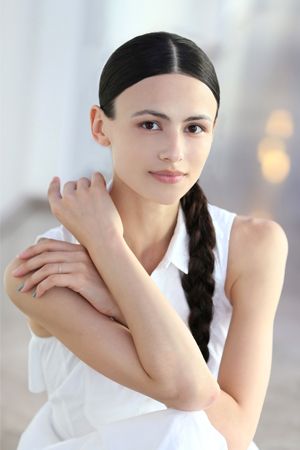 That she is young, has exquisite feet, an ideal physique, is musically alert and technically assured... But Shapran seems to give each step, each action, an inner life that is revealed to us as she moves.

Born in Leningrad (St Petersburg).
Graduated from the Vaganova Academy of Russian Ballet in 2011.
From 2011–2014 she was a soloist with the Stanislavsky and Nemirovich-Danchenko Moscow Music Theatre where her repertoire included lead roles in the ballets Giselle (Giselle), Don Quixote (Queen of the Dryads), The Nutcracker (Masha), Natalia Makarova's production of La Bayadère (Nikia), Pierre Lacotte’s staging of La Sylphide (The Sylph) and Roland Petit’s production of Coppélia (Swanilda).
From January to June 2014 she was a principal dancer at the Mikhailovsky Theatre where she performed lead roles in the ballets Giselle (Giselle, Mirtha), La Bayadère (Nikia), Le Corsaire (Medora) and Multiplicity. Forms of Silence and Emptiness.
Joined the Mariinsky Ballet in 2014.

In December 2015 she made her debut at the Opéra de Paris as Nikia in the ballet La Bayadère, staged by Rudolf Nureyev.