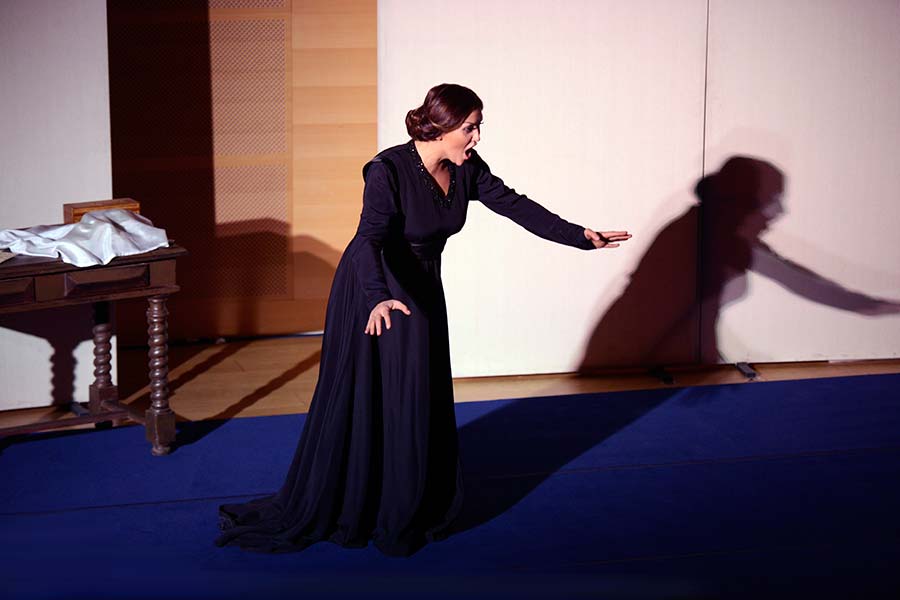 Letter from an Unknown Woman

“Yesterday my child died. And if you are holding my letter in your hand, know that inthe hour before my death I am now telling youthe story of an unhappy life that has always belonged to you alone.”
She was thirteen when he moved into their apartment block in Vienna. Since then her entire life changed: for hours she would look throughthe spyhole inthe door, waiting for him to come upthe stairs; she would kissthe door handle he used; she even collectedthe cigar stubs that his lips had touched.
When her mother remarried, her stepfather took them to Innsbruck. After two years of torment she fled back to Vienna and every day came to look atthe light inthe windows of his apartment. Once he spotted her onthe street, yet he did not recognise his former neighbour. He invited her to a restaurant and then to his apartment and they spent three nights together. He set out to travel and promised to tell her when he would be coming back, but he never actually wrote.
She had a child. She became a kept woman so that her child would never knowthe terror of poverty. Many rich admirers asked for her hand in marriage, but she continued to believe that one day she would meet him. It happened in a restaurant to which she had gone with friends. He asked her home and they spentthe whole night together, just as they had done eleven years before – and, just as then, he did not recognise her.
“I am alone again,the child is gone, and not a word from you. If I am dead to you then why should I not await death? I won’t bother you any more... I thank you. I love you. Farewell.”

The genre of the mono-opera developed in Soviet music in the latter half of the 1960s and over the next two decades it experienced a flourish in growth. This phenomenon is easiest described as an effect of La Voix humaine: Francis Poulenc’s musical tragedy, a forty-minute-long conversation for soprano and orchestra, was first performed in Moscow in the 1965-66 season and was a great success. Yet even earlier, in 1963 Yuri Butsko, a student at the Moscow Conservatoire, began to compose the mono-opera Diary of a Madman to the text of Gogol’s tale.
A lonely little man entered the “palace” of Soviet opera, embarrassed – and with him came his remarks, notes, letters and diaries.
In 1969 Grigory Frid wrote the opera The Diary of Anne Frank, followed six years later by Letters of van Gogh. In a symmetrical response Butsko composed the opera From an Artist’s Letters (1978), turning to the literary legacy of Konstantin Korovin. By 1972 came Vitaly Hubarenko’s Love Letters – in 1993 he wrote Loneliness after motifs from Lettres à une inconnue by Mérimée. In 1985 came the premiere of Waiting by Mikael Tariverdiev (the title exactly matches that of Arnold Schoenberg’s mono-drama, though the musical language is diametrically opposed to that of Schoenberg).
It is by no mere chance that the genre of the mono-opera blossomed during the years of stagnation with its pathos of quiet and intimate narrative (that was when a song with the words “do it quietly, do it in an undertone”), with its interest in the lives of normal people, people who did not stand out, with its nostalgia for the human voice.

Antonio Spadavecchia (1907–1988) turned to the genre of the mono-drama in 1974, having already written twelve full operatic scores. In chamber opera he was as if seeking some kind of release from monumental and cosmic themes; his previous operas included La via dei tormenti after Alexei Tolstoy, The Gadfly after the author Ethel Voynich which was incredibly popular during the composer’s lifetime and the trilogy Ad astra, its characters including Tsiolkovsky and Kibalchich.
Brief einer Unbekannten was composed after motifs from the eponymous novella by Stefan Zweig (1922). Its protagonist, an acclaimed author and darling among women, receives a letter without a signature or return address: “To you who never knew me.” Having read the message from the unknown woman, he senses “the breath of death” and contemplates “a life that has passed”, although at the time of the narrative the character is just forty-one years old. Spadavecchia removes the framework of the plot and concentrates on the letter itself. The opera is a monologue of a woman who has dedicated her life to one man yet has not dared to reveal herself to him; a woman who has never been recognised by her idol – the father of her child – a woman who has only just lost her beloved son and is now preparing for her own death.
The musical language of Brief einer Unbekannten is eclectic; in it one can sense romantic roots, the influence of Soviet popular songs and film music (Spadavecchia himself worked a great deal in the film industry). The waltz rhythm that stitches the musical fabric of the opera together at times becomes a light Boston waltz and at others an excited “grand” operatic waltz. The expressive presentation of the material and the staccato “cinematic montage” structure remind us of operas by Prokofiev, reference books reminding us that he taught Spadavecchia.
In the Mariinsky Theatre’s production the single soprano role has been allocated to three soloists. Each of them has been entrusted with a major episode connected with the protagonist’s life: childhood (in the libretto aged from thirteen to sixteen), the period of separation from her beloved (from sixteen to eighteen) and the final years of cruel expectation when “in the depths of my soul the childish dream that you would call for me, even for an hour, melted away.”