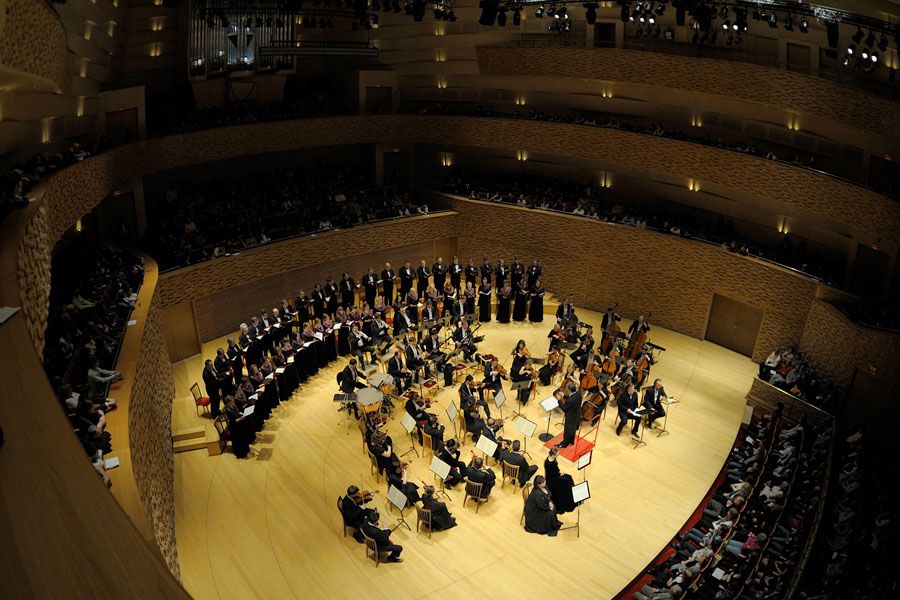 Avenir Vasilievich Mikhailov (1914-1983) – an outstanding Russian choral conductor, professor, head of the faculty of choral conducting of the Leningrad Conservatoire, Honoured Artist of the RSFSR.
Principal Chorus Master of the Kirov Theatre from 1950 – 1961.

The oratorio The Messiah is not just one of George Frideric Handel’s finest works – it has been considered his most important composition for over three hundred years now. Even his contemporaries set it apart from the German maestro’s other opuses. Written at a time when Londoners’ interest in Italian operas was fading catastrophically and interest in English oratorios was growing impetuously, The Messiah was first performed on 13 April 1742 in Dublin. Handel subsequently performed the oratorio on several occasions in London, perfecting the work on each occasion. The women were asked not to wear wide dresses and the men to come without their swords, otherwise there would not be room for everyone in the auditorium. The oratorio was performed for charitable purposes for London’s Foundling Hospital on numerous occasions.
“Messiah” means “Anointed One.” Handel chose the story of Christ for this unusual oratorio. Charles Jennens wrote the libretto using sections from the Old and New Testaments – not a single word in it was not taken from the Bible. Moreover, unlike all of Handel’s other oratorios, in The Messiah there are no characters and the work is as far removed as possible from the operatic genre.
In the very first words sung after the overture and the tenor’s recitative, we hear of comfort and the redemption of man’s sin – Handel opens The Messiah with the Good News. In the first part the oratorio tells of the events surrounding the birth of Christ and as it progresses the music proceeds to take on an increasingly pastoral in character. The composer even included a short instrumental passage in the folk style called Pifa, imitating the music of Biblical shepherds. The duet of the soprano and alto at the end of the first part is dedicated to an image of Christ – the Good Shepherd.
The second part tells of Christ’s Passion, though Handel very quickly passes on to the theme of Resurrection and ends this part with the grandiose Hallelujah chorus. Shorter in terms of length, the third part speaks of victory over death and of eternal life. For this part Handel composed a duet of an alto and a tenor who exclaim “O, death, where is thy sting? O, grave, where is thy victory?”
The oratorio was written by Handel in just twenty-three days. Despite the fact that at the time the composer was facing harsh circumstances, it would appear that for these three weeks he was incredibly happy. His inspiration never left him. The Messiah is a surprisingly harmonious work. The soloists, chorus and orchestra are in perfect harmony and balance and the most surprising thing in The Messiah is the positive energy that flows from the music. To speak of joy without repeating yourself and yet finding new shades each and every time is a rare gift indeed.
Anna Bulycheva